My Happy Trip To Taiwan


I have visited Taiwan several times and covered many towns right from the north of Keeliung Port down to south at Kaoshiung.......passing through Taipei, Tainan, Nantou and Taichung but I did not see much of the tourist places at all. It was either a rush business trip or to attend big Tibetan Buddhist praying sessions. So during the recent trip to Taichung, I extended my stay and pampered ourselves to sleep in good hotels with spa and shopping. It was the best and happiest one we ever had in Taiwan. 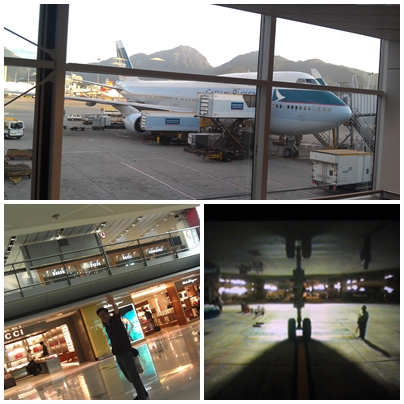 It was my first time flying Cathay Pacific as they were giving cheapest fares. I always flew Taiwan's China Airlines which could not beat this CX class. I could even see the personal TV monitor showing the plane's wheel landing and taking off. It was amazing for a nerd flyer like me! (see right pix) 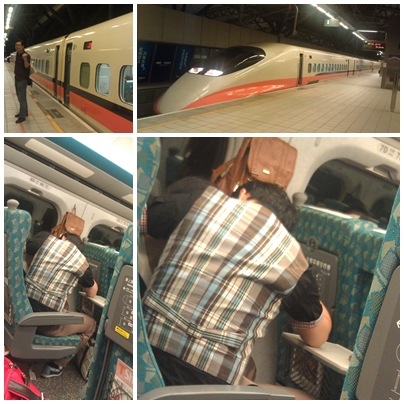 From Taoyuan's Airport, I took a bus to catch their High-Speed Trains to Taichung which took less than 40 mins. Normally it would take almost 2 hours by car. The train was smooth and SUPER fast! The Taiwanese couples are often dramatic. Look at this guy groping and kissing his girl friend who sat like a helpless star fish on her chair with 2 legs pointing East-West.. This Ah Lian was in a "Shiokalingam mode". 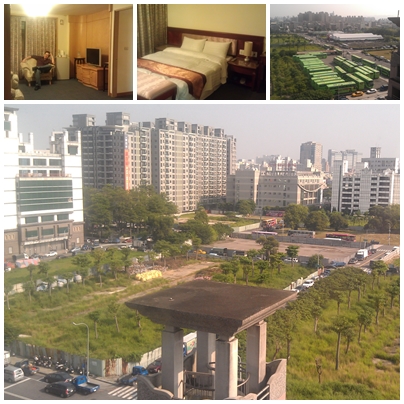 We stayed in a military's hotel in the outskirts of Taichung which is a bigger sized city compared to Kuala Lumpur. The hotel's suite room was very big with a separate living room and huge bathroom. It cost me only RM198 a night. What a good deal. 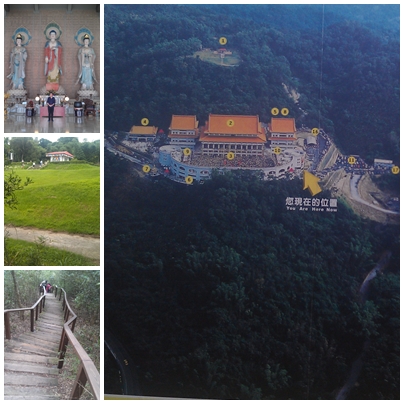 Next day, I got onto a taxi to bring me to the mountains in neighbouring Nantou county. I took the aerial view's photo from their wall poster. I have visited this powerful temple many times and my prayers have always been answered. Can you see me posing infront of the 3 giant statues???? Behind the monastery, there is a small shrine of the Goddess "Golden Mother Of The Jade Pond" (Yaochi Jinmu) at the highest peak. I had to trek up the steep steps to reach atop to offer my prayers. Many years ago, I was being invited by the Master to stay overnight and slept in that monastery during the cold winter, inside the monk's chambers. It was an unforgetable experience for me to sleep on hard wooden beds without mattress or heater. I was freezing the whole night. 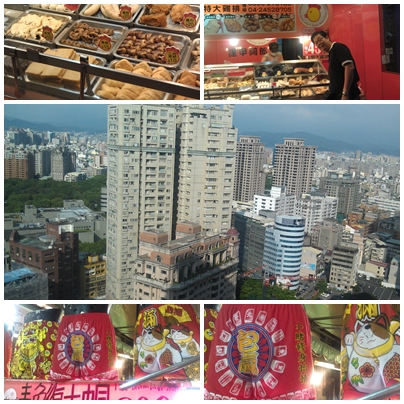 I went to their interesting night market and ate many types of fried food. I saw the shorts for the gamblers but they were all sold out. The city view of Taichung's downtown from another hotel we stayed. 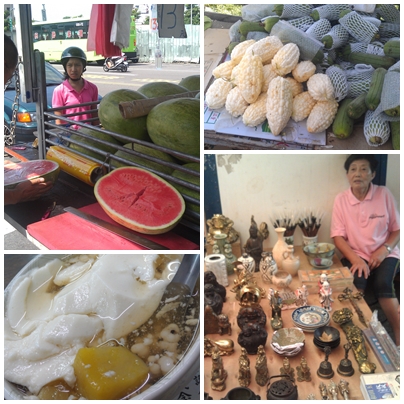 In the morning, my wife and I strolled into their wet market to have a good look at their fresh produce of vegetables, fruits and meat. Their watermelons were giant sized and bitter gourds were pure white!!! The grumpy old lady was selling odd pieces of antiques salvaged from the old families who discarded them. I managed to buy 3 pieces of old and very rare plates, dated back to the Ching dynasty's era. I regretted for not buying a rare black and white photo showing the group of Koumintang's Officials posing with Chiang Kai Shek and Madam Soong Mei Ling. I have a vast collection of unwanted family heirlooms and antiques which I hope will be a good investment when I sell them off 10 years later. 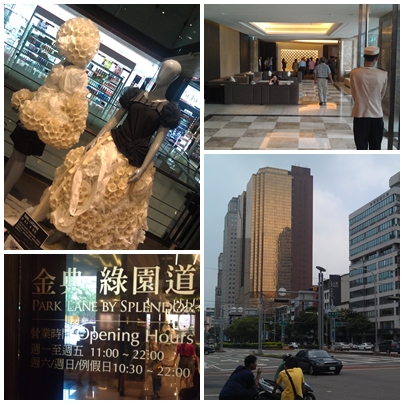 We moved to the city area and stayed at the 5-Star Splendour Hotel which has a huge high class "Park Lane Shopping Centre" beside it. The hotel had a promotions and I paid only RM250 per night with free use in the Spa & Jacuzzi. It was heavenly! 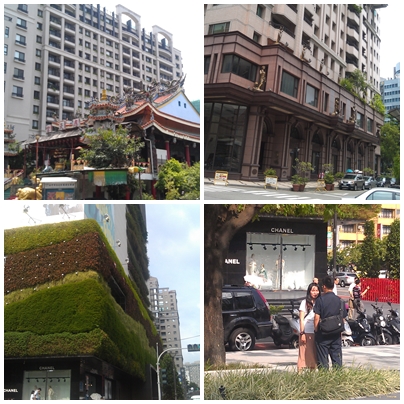 The Spring weather was beautiful and many families strolled along the "green belt zone" which has lovely landscapes and artistic monuments. The above building was being wrapped by plants from the ground all the way to the top. Interesting sight! I stumbled into a couple who were shouting by the streets. The lady cried her hearts out and screamed hysterically like a mad woman at the man. YOU KNOW WHAT????? I was the only one standing and watching the lover's quarrels in Hokkien Dialect. The Taichung folks are simply not bothered at all. I WAS SO KAY POH!!!! Kakakakaka!!! 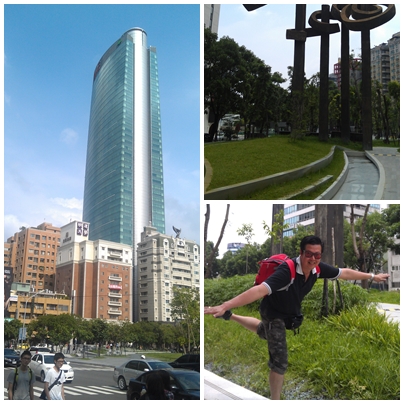 This is the Green Zone area and I was flying like a plane on the trails. I rank Taichung as the nicest and loveliest city in the whole of Taiwan. The environment looks simply beautiful and better than Taipei or Kaoshiung. This is just my subjective opinion. 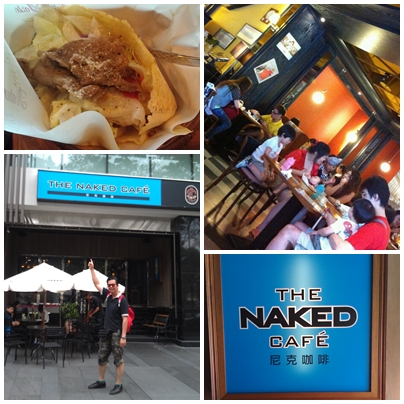 I passed by the most famous "THE NAKED CAFE" and told my wife to get "naked" and have our lunch inside the packed restaurant. The food was very delicious with big portions. We had to ta-pao "doggie bag" our left over lunch. I had a BIG SHOCK to see the woman above breast feeding her baby in the public. OMG!!! She was so daring to expose her 2 big boobs in broad daylight. I think Yannie would call this "BYOB" 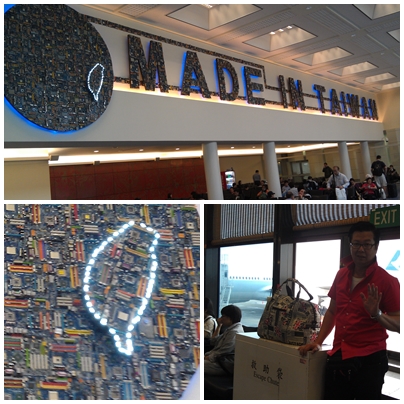 We had so much fun in 3 days with sweetest memories of Taichung. We had plenty of time to really relax happily and check out all the facilities and amenities. Look at the interesting "MADE IN TAIWAN" word using the recycled computer boards which was on the walls of the airport. Reminds me of SK's blog. 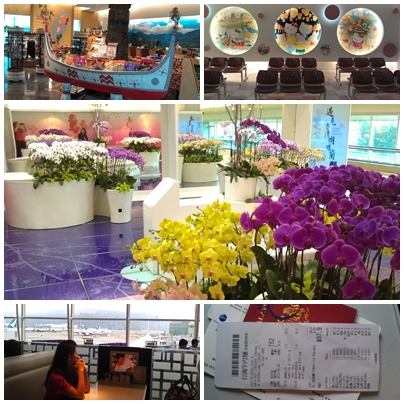 on November 05, 2012
Email ThisBlogThis!Share to TwitterShare to FacebookShare to Pinterest