It was raining cats, dogs & shit yesterday all over the city. The massive traffic jam was expected. BANG! BANG! KABOOM! My honey's car was being hit in an accident. One old Ah Beng was speeding along MRR2 and didn't see all the cars had stopped moving in the traffic crawl. He just rammed hard like a MF, making three's a company. The MRR2's jam tripled with so many busy bodies on both directions looking. Ah Beng's Proton Wira was badly damaged with broken radiator, engine and had to be towed to car mortuary. Honey's car was tough but the repairs could hit 20K as all parts have to be imported in. Never mind, the Ah Beng driver's insurance will do the talking from here.

I followed along to make police report at midnight at the Balai Trafik near Petaling Street. It was a relief to know that they have upgraded with so many PCs where you just need to type your grandma stories about how Ah Beng rammed onto you senselessly. They even provided a template. Less than 1 hour, we proceeded to the pitch dark parking lots to have our car photographed by a police photographer. His camera was so unusual and canggih! I thought he was holding STAR WARS - Hans Solo's weapon but it was his digital toy camera.

Outside the police station, I walked around the whole mess of severely damaged, flattened and mangled vehicles at their designated area. My hair stood up with chill! It's still hungry ghost month. You could be convinced that all the drivers were killed in those scrap looking cars, which are beyond repair. 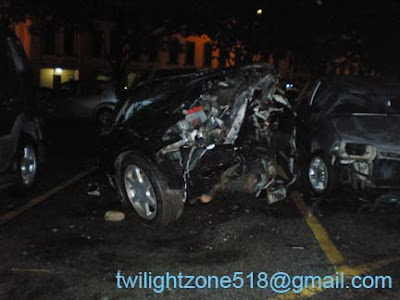 It was a sad and pitiful sight. They must have suffered a painful death. Their loved ones must have lost their breadwinner. It could be their sons or brothers, I was not sure. Sob! Sob! 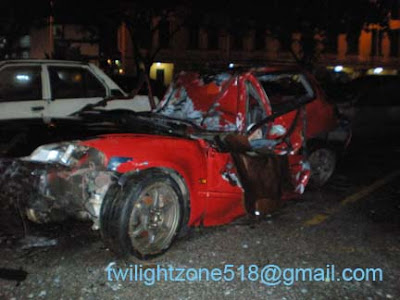 Hail Mary! If you believe me, their spirits were all over the place! Many souls were not being able to leave the place & don't ask me why.... Eerrr, ask them yourself. Legolas?? 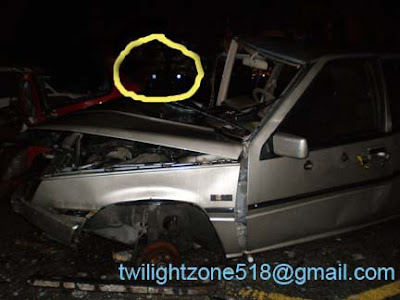 Spirits often appear in lights as they no longer have physical bodies. They would just float lightly. Cameras don't lie as they have no karma that block their lenses. We have karma that block our 3rd eyes. Look at the eyes that looked at me taking a photo of his car, just to show you. 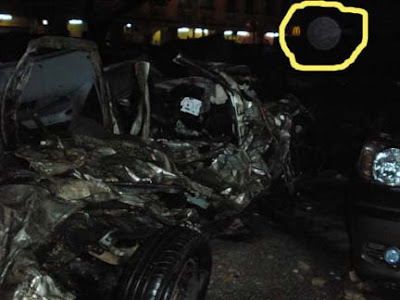 They hope that we would always do prayers to ferry the lost souls to heavens. It's big merits, you know. The circled one could be a deity. Many photos often pointed out similar appearance too. It's up to you to believe. Why don't you go there to see for yourself like I did. My head went into trance thinking of all my best friends who had died young. Only 2 died in tragic fatal accidents and I never forgot them. I cried when they were killed and my heart died with them. We were close buddies and play mates. 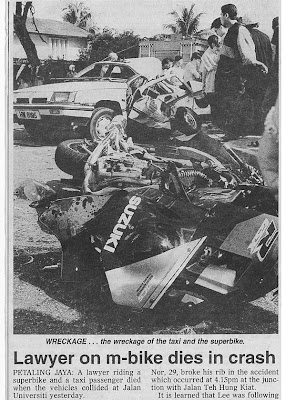 My friend Daniel Lee was always a hell bike racer who could daringly ride his Yamaha Enduro scrambler to race up the flight of 3 storey staircase at our school. The angry principal greeted him at the 3rd floor and his bike was promptly banned from school for 6 months! Daniel graduated from UK with honours in Law and was ready to practice in KL. He treated me to my birthday drink 1 month before his death at the Jalan University's round-about. His Suzuki 650 hit the taxi so hard that shocked the passenger who just arrived from Kelantan for a job interview. That poor applicant died of heart attack after walking out 10 steps from the taxi. Daniel was pinned under the taxi & died instantly. 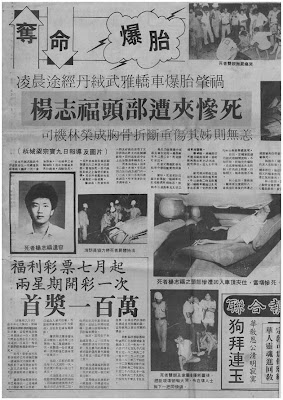 My friend Terry Yeoh was seated as the passenger behind the car driven by my classmate. They had earlier gone to Cinta Discotheque at Rasa Sayang Hotel where several cars of friends were racing home along the winding roads of Batu Ferringhi. The car which carried Terry punctured its tyre and lost control at the bend near Sri Batek. The ill fated car somersaulted over 4 times till it turned turtle upwards. 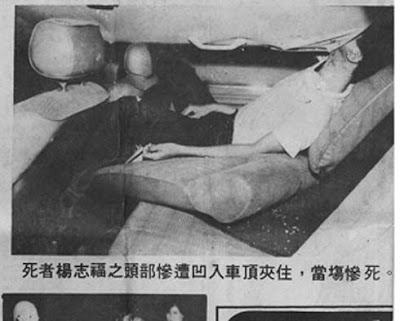 The roof of the car tore open and Terry's head & face got caught in between. His skull was scrapped along the tar road and his brains oozed out. I lost my food appetite for 4 days. Terry came into my dream after his funeral. We sat on the pavement of the road and chatted briefly. He asked me if I knew that he had died? He expressed in tears that he was very sad that we could no longer have fun and promptly got up to walk away from me. I learnt that his family got a medium to call his spirit back. He related to them how the accident happened where he was pinned for hours in the wreck. He heard the ambulance and firemen in chaotic commotions trying to remove his lifeless body. He was physically dead but not brain dead as his senses was just fading off. His death at 22 years old was fated, it seemed.