These series of horror ghost documentaries have been circulating for sometime but I just got to view them. You will be surprised that those hard core fans who watched these DVDs are some KL's Tai Tais and Datins who introduced them to me! They're so concentrated San-Phor lah!! The show was produced by a group of Hong Kong TV crews who would scout the most haunted locations all over Malaysia, Thailand and Laos. Their host metaphysician -  Si Tou Fa Zheng claimed that Malaysia has the most spooky and haunted places which I strongly disagree! Perhaps they got to hear more about us as we have Cantonese speaking story tellers compared to folks in Thailand and Laos who may not reveal so much. To my opinion, Indonesia has the most horror & deadly tales and maybe Thailand takes the 2nd ranking.

Honestly, since small I had seen tiny and big ghosts everywhere plus half bodied headless spirit when I lived in a home at Bukit Jelutong! That award winning housing area is indeed a lovely place to live. Many spirits do have good living taste and choice too! I moved out from that place as I nearly got accident many times when I often dozed off along Kesas Highway whenever I worked late till wee hours. Some visible dents along the highway's railings belonged to me. Heh Heh! 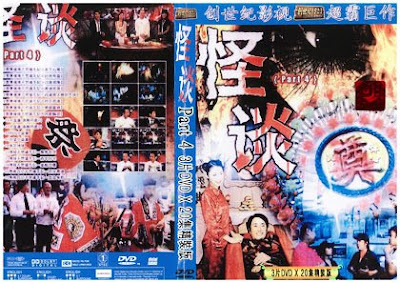 This horror series is now in its 6th Volume with 3 pcs DVD in each of them. Naturally I am interested to watch them to understand the spiritual world better. The spiritual world is all 100% real and they might chat with you when they know that you are kind, harmless and could sense them. We humans have 5 senses. I have met others who could just see, hear or feel them, depending on their fate. Many of you have the good instincts which could be your guardian angels, ancestors or a happy passing deity who spoke to your heads. You ended up making wise decisions, judgement or right path that brought abundance of sweet success! So keep a happy and kind heart always, your frequency will attract the same spiritual waves of frequencies to envelope you. If you are bad & devilish hearted, you might attract all the Mor Kwai or Ham Sap Kwai to unite with you. 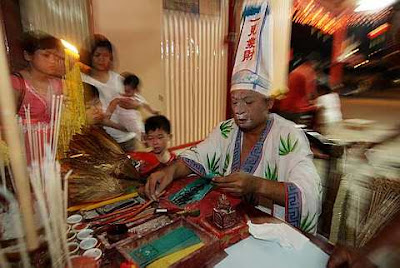 This Kwai Tan show (Vol.4) covered about the gruesome murder case of Penang's little girl Shearwei Ooi Ying Ying. They engaged the Hell Officer through a medium to call her spirit to communicate with her lost & frightened soul. Her body was chopped up, so her soul was shattered & torn as a result. It is better to die in one complete piece but not everyone has this good fate. 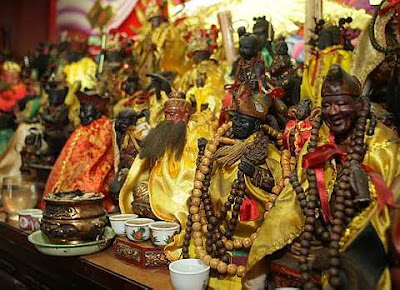 The many deity statues at the Leong Hong Keong Temple along Lorong Slim, off Perak Road in Penang. 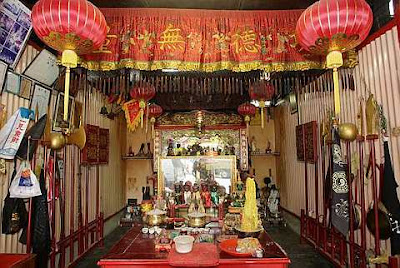 This is the front and altar table of the Leng Hong Keong Temple in Penang which is dedicated to underworld deities - Tua Pek (Grand Uncle) and Jee Pek (Second Uncle). It is well known place for those concerned living relatives who wish to know if there is anything that they could do to help alleviate the suffering of the departed souls. 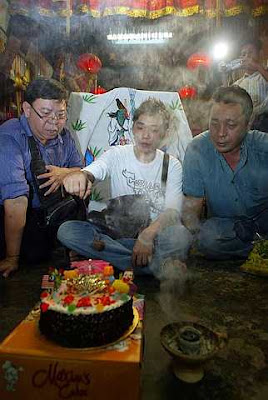 This temple medium uses a unique method to allow the devotees to communicate. A dried up lime coated in thick wax dangles on a long red string. Initially the string would be still and the fruit starts swinging back and forth before moving in a circular motion. Your hand would still be holding tightly and still but the deceased spirit would swing in the directions that answers your questions - YES or NO. 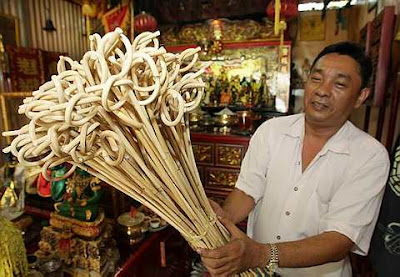 These canes are blessed by Tua Pek before they are given to parents of disobedient kids.

The whole series of Kwai Tan DVDs showed very scary actual haunted spots in Malaysia, Thailand and Laos! Some even showed the actual real life of slamming doors and moving wheelchairs! EEeeeeeeee!...... not for the faint hearted ones to watch alone. If you need companion and free hugs, please contact me.

It is VERY IMPORTANT to pray often and respect all our ancestors at all times. This applies to all faiths and religions.

The above photos are for illustration purposes only as I would not be able to copy them out from the DVD. However, the temple and its medium are actual & real as seen in the DVD whilst the couple holding lime is similar to what you see in the DVD clips.
on August 25, 2008
Email ThisBlogThis!Share to TwitterShare to FacebookShare to Pinterest