Last weekend, I went to Penang to relax and for binge eating the yummiest sinful food. Finally I stepped inside & dined at the famed "32 At The Mansion" chic restaurant where Hollywood's film producer Ang Lee shot a movie part inside the cozy colonial mansion by the sea. The dinner's bill almost shattered the chandelier's crystals on the ceiling above my head.
Elsewhere, I also ate the Loh Mee, Assam Laksa and Mee Goreng. My saliva still drips & flood when I type right now. That is how greedy I can be by just typing about Penang's food. 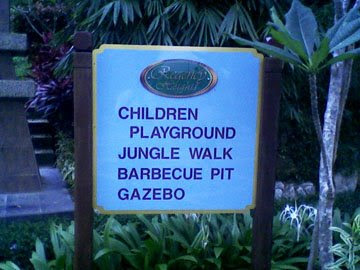 I had to exercise a lot in Penang so that I would not feel the guilt of high calories and fat. I wore my old koyak addidas shoes and went for a jungle walk alone for the first time. 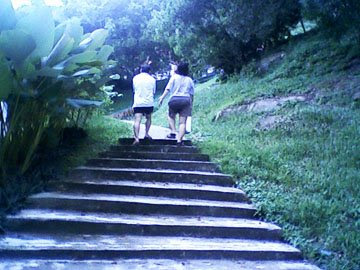 I had no idea where it led to but I simply followed this couple up the long flight of steps. 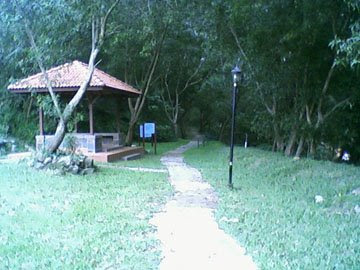 I reached the highest peak which promptly led me into the wild Amazon jungle of unknown species and tribes. I thought I heard Fable croaking by the gazebo hut. 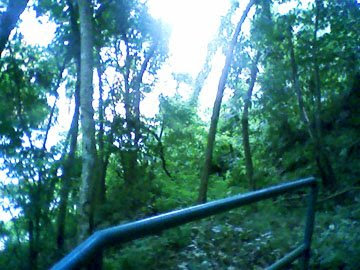 OMG! It was such a long walk through thick greens of tall trees and ferns plus hundreds of cicadas calling. It was dark and so cool after the heavy rain. I was alone and kinda scared what if a robber or rapist hid behind the trees? Can I scream for Fable Froggie's help? He might be busy making tadpoles behind the bushes, yeah.. 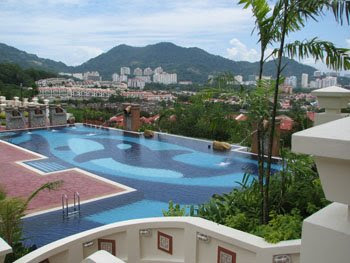 Safe at last, I saw light at the end of the jungle! I was being greeted by the infinity swimming pool at my dad's new condo which he just moved in. It was really amazing that a condo had its own private fenced jungle about 0.25km walking path! The whole brilliant concept was the brainchild of IOI Group's developer which is the richest & biggest developer in Malaysia!

Perched almost on top of a hill in Penang, you can see the breathtaking panoramic view below, 180 degrees wide. Far behind this pool you could see the sprouting high rise condos and entire straits seaview amidst the cooling breeze. 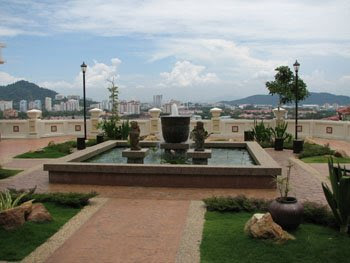 This Balinese fountain is a nice spot where you can view the Penang Bridge and mountainous hills running around like a Dragon, supposedly a good Feng Shui enclave. 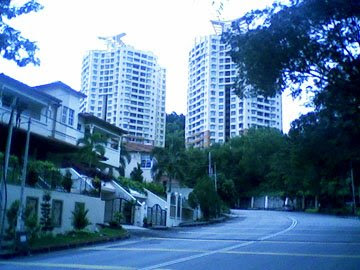 The 4 block condo sits atop the hilly terrains and the slope upwards is so bloody steep. My tongue was sweeping the road as I panted my way up like a doggie, just to snap this photo to share with you guys. 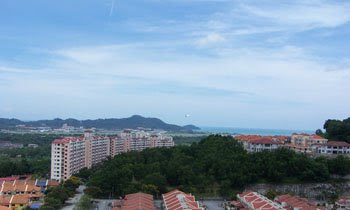 In my bedroom at last, I could see the international airport's runway far below from my window. I would count the planes taking off and passing ships. Heavenly isn't it? Well, we had to sell off our previous home as my mum could no longer climb the 3 storey house which had almost 40 steps to reach her bedroom.

Penang commands the most expensively priced land in Malaysia today as the little island has very limited areas left for development with its many untouchable hills scattered around. A 50 year old pint sized single storey terrace house in a very shitty area could fetch over RM500K. That is daylight robbery! I am actually referring to my buddy's house lah. The costliest areas are even selling higher than KLCC and Bukit Tunku's price tag.

When economy slides, it become the buyer's market. It's ripe time to buy properties at bargain prices!

on December 02, 2008
Email ThisBlogThis!Share to TwitterShare to FacebookShare to Pinterest