The weather has been so unkind these days. Over here in Kuala Lumpur, it has been pouring heavily almost twice a day, flooding so many highways, streets and corners. This is the best time to sleep longer at home or stay indoors at office.

Goodness No! Being the right hand man, my tyrant boss naturally assigned me a tedious duty that sent me outdoors everyday like his miserable slave. I call him tyrant as he behaves like one. Have you seen any boss who speaks real 'kao' vulgar Cantonese words during the management meetings? Yes, my boss does! Everyone's mothers' and ancestors' private parts will be quoted & verbally molested, making his speech so flowery vulgar! Adoi!
Anyways, I often giggled instead as the meetings were never boring especially when the senior managers often clashed swords verbally and hurled abuses at each other in my boss' presence. That is so typical China Pek style of factory. 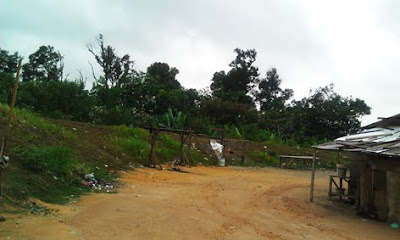 Everyday my mobile would be bombarded with calls from potential buyers. They would speak to me in English, Malay, Cantonese, Mandarin and Hokkien dialects. Goodness, those who know me personally would be laughing their asses off! I am a real 'Banana Man' whose speaking ability is better in English and Thai language than any spoken Chinese, not to mention Mandarin!

The photo above shows the huge piece of Star Fruit's orchard land which my boss will be building boutique factories! He hung over 20 banners all over Cheras and my mobile seems to be the hottest favourite number for the businessmen to call. They are so hardworking and could start calling me from 7.00am each day!!! That means they were on the streets to start their working day at sunrise while I was still SNORING asleep!

Whenever they expressed interest, I had to drive to the highest peak in Balakong to show them the site! The interested buyers were so determined that they would happily meet up in the rain, holding umbrellas! Crazy nia boh! My poor car, shoes and pants would be stained & soaked in murky tea water and thick mud! My poor leather shoes! Maybe I should ask boss to buy me new pair of Ferragamo or Jimmy Choo's shoes! Damn him! 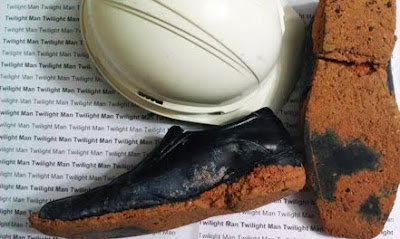 This perspective design below is the limited 17 units of boutique factories that is selling like hot cakes in 1 week. It costs RM2.8 million upwards and the ah pek businessmen whom I met gave a me multiple shocks with the CA$H and wealth they have! I am sure our country's economy is still booming! No??? 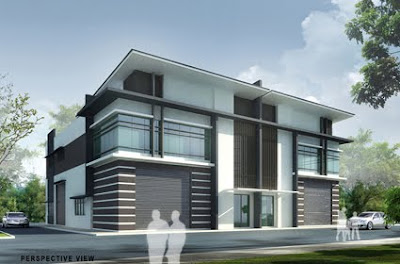 Hey, I am not selling factories in my blogs okay! I am not getting commission either! Just for illustration purposes only.

on August 11, 2011
Email ThisBlogThis!Share to TwitterShare to FacebookShare to Pinterest