I have been in a hiatus mode for some weeks now! Gosh! Time flies and the other bloggers have been so active with juicy updates. What has happened to me? Some thought I went for winter vacation but unannounced? That's not me, I would announce to the world if I am packing my luggage to fly off somewhere. Actually, truth to be told, I have never been so busy at work in my whole life. My assistant had resigned and my world suddenly turned upside down with my silly boss asking me to rush out many proposals for him. His proposals would total over 500 pages of power point!! Yes!! Over 500 pages besides doing all my assistant's on going jobs. %#@&*#!!!

I have been so stressed inside and outside my office! Bonkers!


My condo's tenant has just moved out after 4 years living in Malaysia. She came from Libya with her family to pursue to her Phd studies in our local university and they have been very good tenants so far. The husband is about 6 feet 5 inches tall and really looks exactly like Michael Jordan, the NBA celebrity. The husband painted my whole condo unit by himself before handling over the keys to me to receive his deposits and a pat on his back for his paint work which needed no tall ladders. That was enough to soothe my eyes when I saw some minors defects and damages left behind, besides all my disappearing curtains with his Houdini acts! Muahahaha 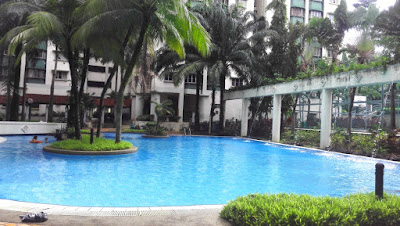 The rental & property market has slowed down recently due to the failing economy and over supply of condos and office blocks! So I decided to engage the hungry agents to help me but they are not aggressive enough so I decided to paste ads inside the 7-Eleven stores and online. This is my first time having to go this far as previously, we always had desperate tenants lining up to rent my unit as Taman Danau Desa is quite a convenient location with lots of amenities and excellent infrastructure. A friend advised me to post the ad online and I tried Mudah.Com for the first time. It was quite scary as I received text messages so quick. Too quick to believe there are predators lurking over the net. 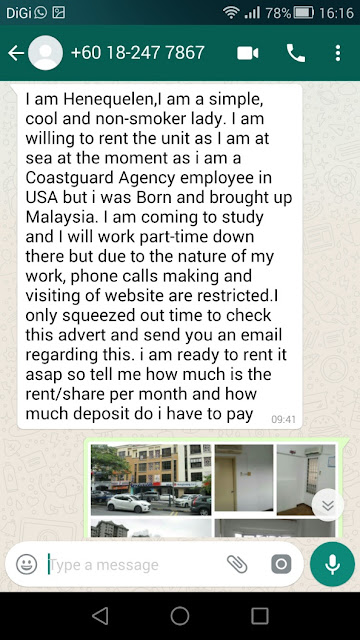 At 3.00 am, someone was looking for a condo and I received this text. It was so nice and convincing! 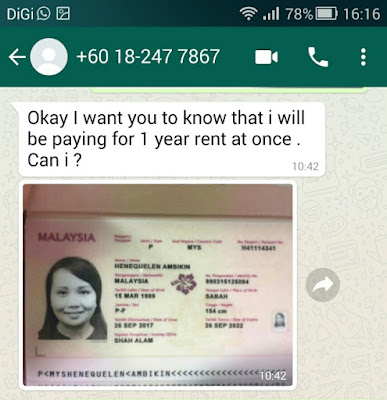 Without even viewing my unit, she offered to pay one year in advance and showed her passport right away. I am not a moron and my suspicious radar was on alert with careful replies. 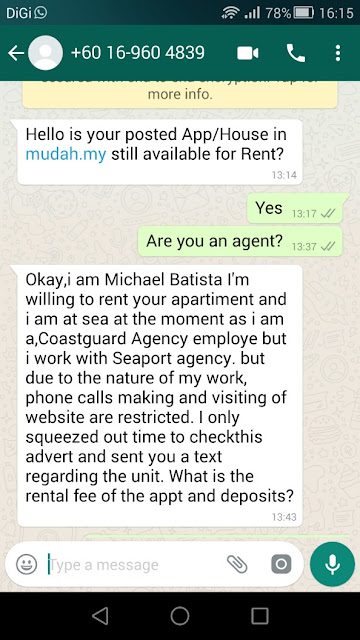 Michael Batista texted me a few hours later and that's his lame reply. By the way Michael Batista is an actor in the West and why would he rent my shitty condo instead of around KLCC's vicinity? I quickly googled both the names of Henequelen and Michael which confirmed my suspicions that they are international con men who have sent similar template texts to many victims from Malaysia to Singapore and even Australia and USA! If you would bother to read the links below, that exposed their scams and lame tricks to lure naive victims. So beware and please be alert.

I replied them with nasty messages and stern warning in capital letters besides showing both the identical templates they had used? They just balked out quickly and went silent.

How do they cheat? They would say they would send money to you, the big deposits and many months rental via pay pal. Then they would text you later that their movers company had difficulties to receive their payment to shift their stuffs citing reasons for being in faraway ocean deep! "So, please help to pay my movers company in advance and I would wire the full deposit total together with the mover's fees to you in one lump sum!" They would give the gullible landlords the fake account number which goes directly into their own pockets. Later they would send you fake "proofs" that they have paid you via pay pal. When you have gone merry-go-rounds that you never received a cent and pay pal officer had confirmed there was no such transactions, the scammers would threaten to sue you if you don't return their money besides calling you a cheat landlord!! Whoa!! Such a silly drama could even deceive many naive victims around the globe.


My friends, please beware always and share with your loved ones this nonsense!

on January 17, 2018
Email ThisBlogThis!Share to TwitterShare to FacebookShare to Pinterest

My Battle With Colorectal Cancer 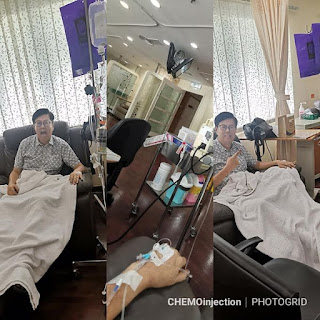