Hola! This is the continuation of our getaway to one of the best rated and unspoilt islands in Indonesia. Pulau Belitung is truly a very quiet place with little development and suitable for anyone who wishes to relax and rejuvenate their souls. That place is crime free with many friendly and helpful villagers who would strike up conversations to ask where we both came from. All guesses pointed out that I came from Korea or Japan and not Malaysia or Thailand. Haiks.

This post would share the island hopping trip only. I believe there will be another 2 posts next week after my posts of my visit to Busan in South Korea. If you wish to read about the fabulous hotel we stayed at Pulau Belitung, please click PART 1. 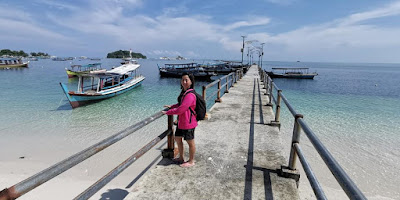 We rode a motorbike in the rain to this Tanjung Kelayang pier a day earlier and found a boatman who charges 50% cheaper than all the middle men in the town. The next day we arrived early and the weather was perfectly sunny and windy! It was actually the rainy season with choppy waters. Heavens was kind to us! 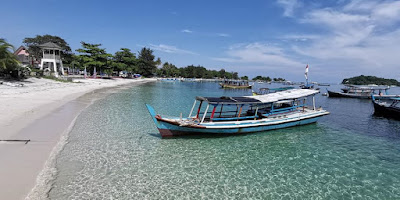 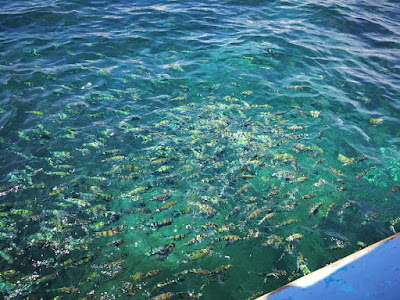 There were millions of happy fishes swimming everywhere! 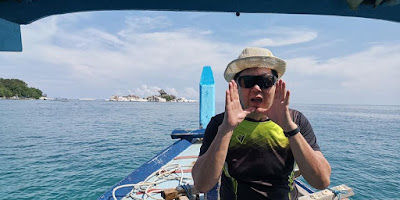 Ahoy!! I yelled at my wife that the boat was leaving. 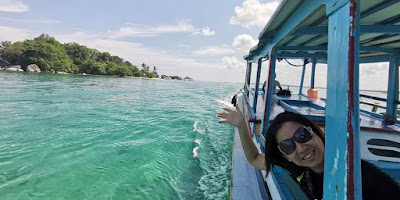 My wife was very excited and happy like a little girl! 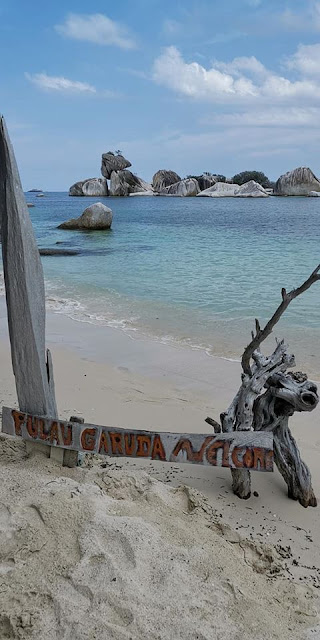 The boat ride was just an hour and we passed several islands. 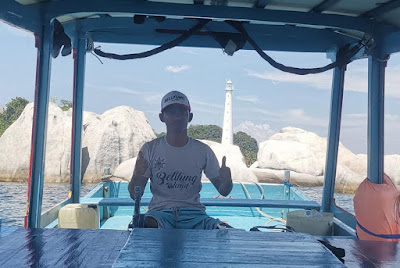 This is Captain A'ak whom we engaged to bring just 2 of us on his Love Boat! I was surprised that he could speak good English with a little mixed accents from the British and American slangs as he picked up the language on his own. I salute him!... You can directly contact him through calls or text Whatsap at his number: +62 812-7121-8298 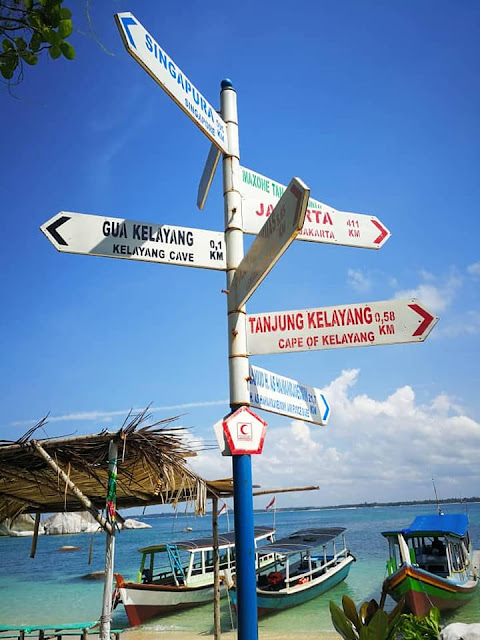 We arrived at Pulau Langkuas. 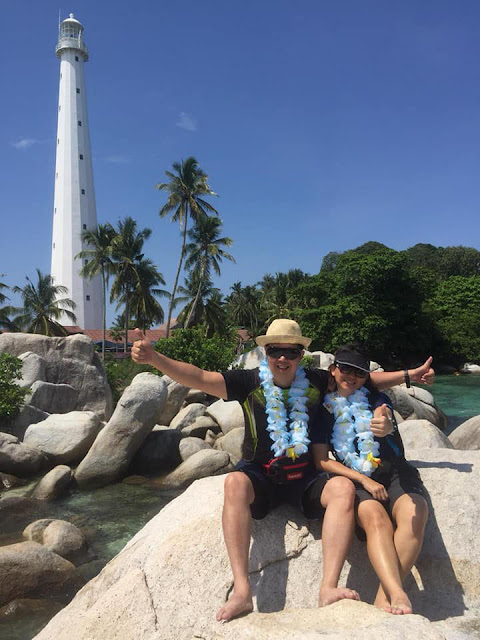 The love birds couple quickly sat down happily and posed for the album. 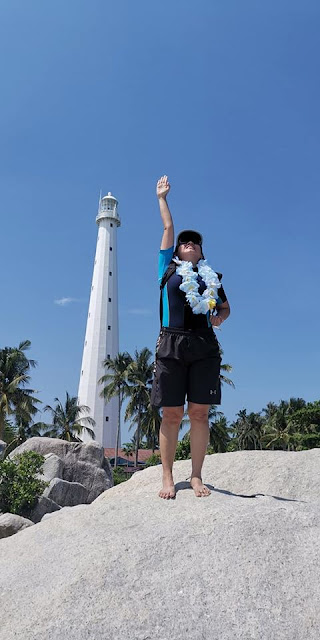 My crazy wife believed that she was taller than the old Dutch lighthouse which was built in 1800s. 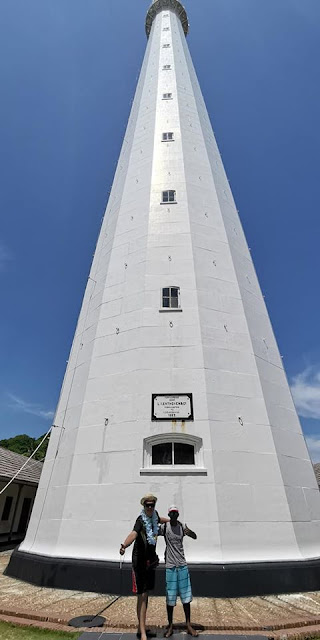 The Captain and I. 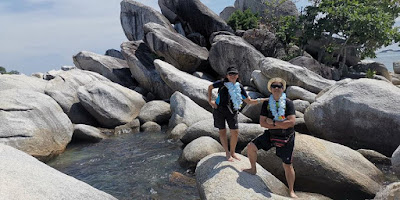 One pose on the rocks. 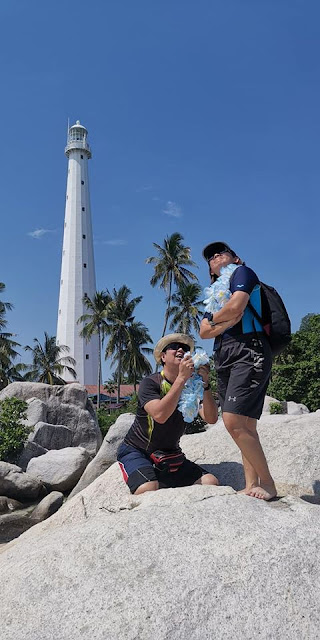 I know I have been quite rotten to my wife many times and made her very angry until smoke came out of her ears. It won't last over 10 minutes and she would forgive me. That's because I have no ego and would always apologize 100 times whether I am right or wrong lah... Hee Hee Hee. 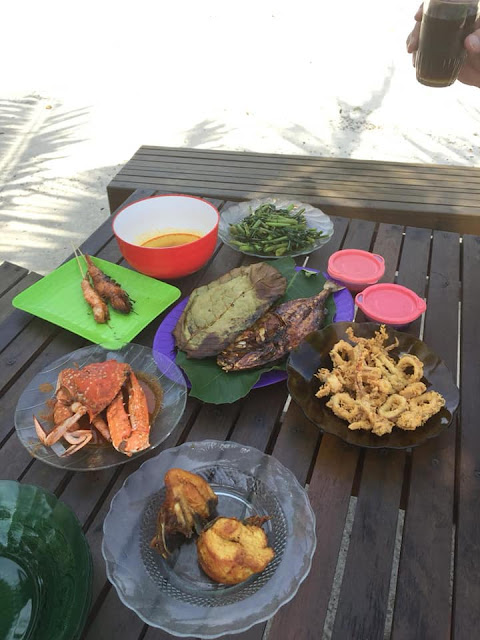 We sailed to Pulau Kepayang for lunch in a small restaurant hut in the middle of the ocean! We had to book a day earlier and paid for the special seafood lunch to be prepared. The restaurant had several other tourists with free flow of hot coffee and tea. They have water wells with pumps to supply clean water to shower and wash our feet. The water was so damn cold like iced water! It was so heavenly nice to shower under the sunny weather. The temperature was just under 30 degrees C. Nice! 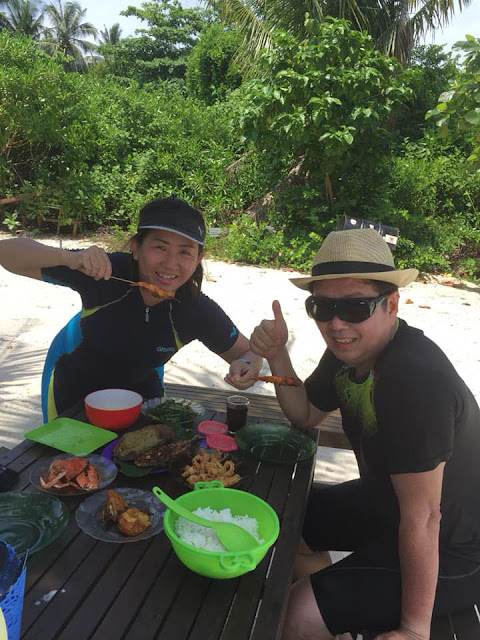 The seafood lunch was fabulous and very tasty with plenty of chilly and dipping sauces! We ate fish, crabs, prawns, calamari, chicken, satay, Vege and rice. All the traditional Indonesian food is always superb from Jakarta to Lombok, Denpasar Bali and Yogyakarta. I am glad I have tried them all. 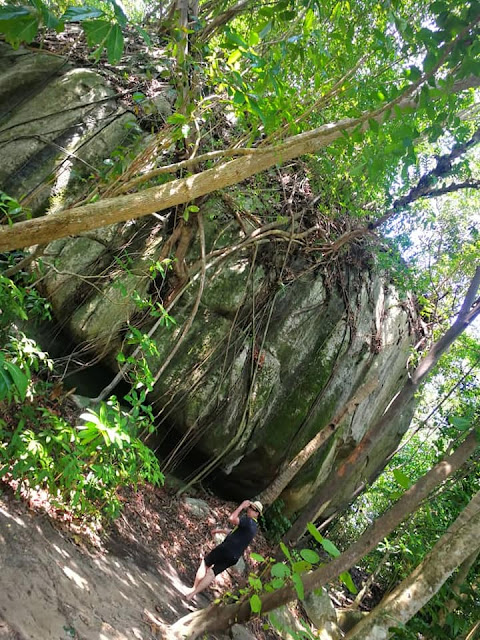 After makan, the Captain insisted to bring us for a short hike into the jungles! I regretted for being a hero and walked bare footed. Ouch!!!! 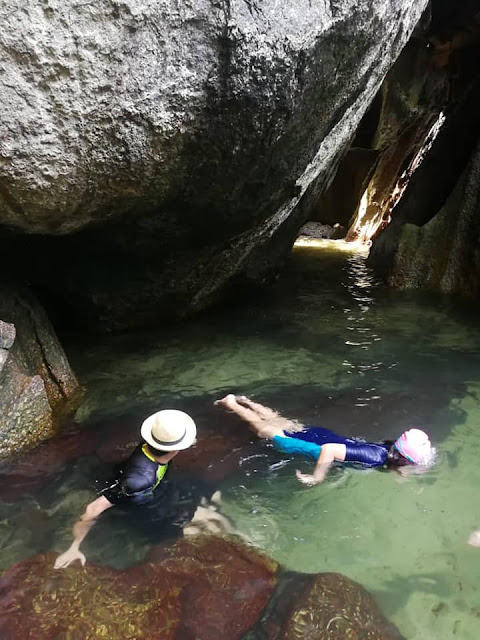 He wanted to show us a hidden cave in between the big rock boulders. I felt creepy as it reminded me of the lost boys who were trapped inside the caves in Chiengmai. We just swam briefly at that spot of the cave's mouth. 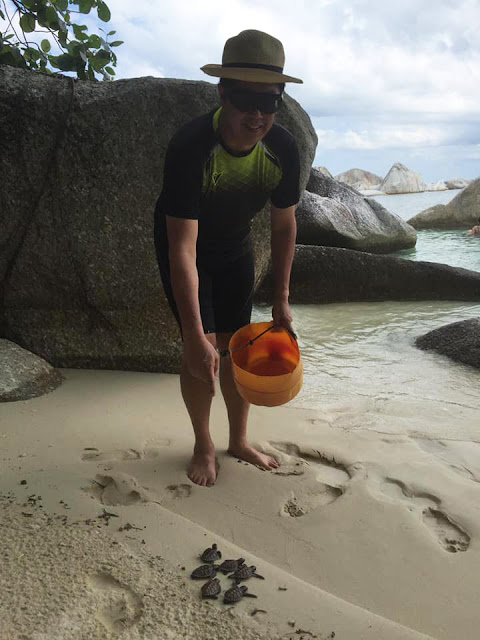 There's a NGO sanctuary there where they collect all the turtle eggs on the beach to hatch them safely, so that eagles and predators would not harm the eggs or tiny baby turtles. Once they are bigger, they would be released into the ocean. I paid a fixed donation to release just 6 baby turtles into the waters. One of them ran happily towards the seawater and stopped. It turned its head back to look at me as if to say "Good bye my friend"........Whoa!... My tears flowed out like attending my great grandfather's funeral. 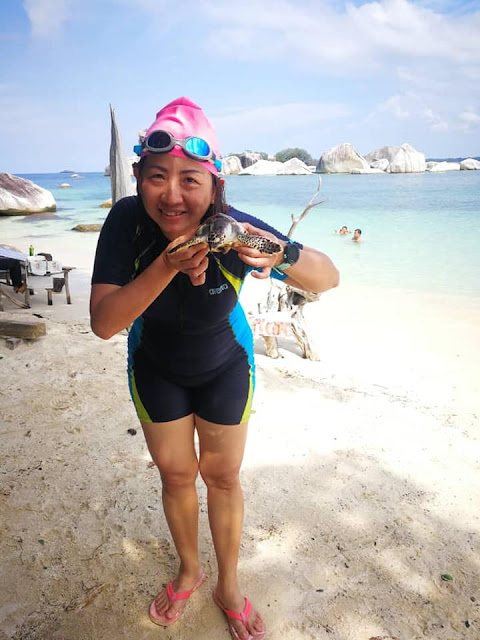 My wife picked up a bigger turtle and chanted some Buddhist mantras before releasing it. That day I thought of Blogger Libby who often took boat rides in Singapore to liberate lives of tiny little fishes, prawns and others. What a big and kind heart Libby has!! Now I could understand the compassionate feelings inside my heart after releasing just 6 turtles which really has no words to describe. 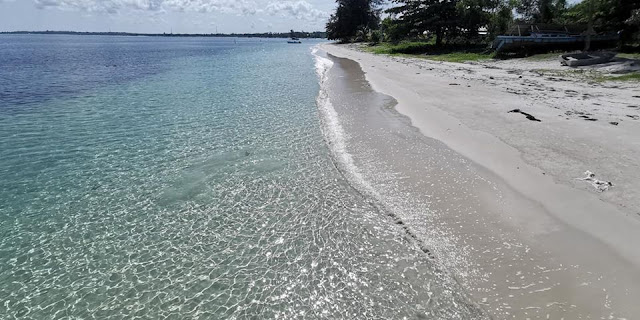 Pulau Belitung is truly a paradise on earth. The pristine beaches with clear water and many surrounding islands are still unspoilt with little tourists. The food and hotels are cheap too. 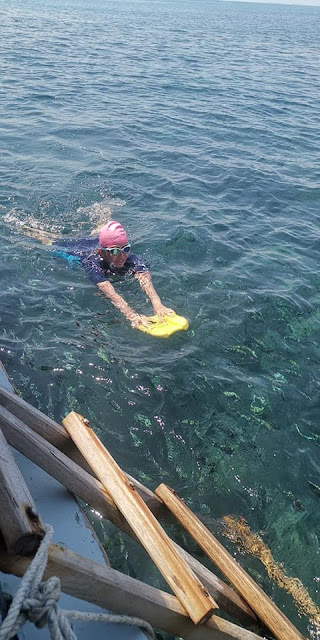 We swam for hours everywhere from the caves to the shores and in the middle of the sea. It was truly enjoyable with endless of fun like there's no tomorrow. 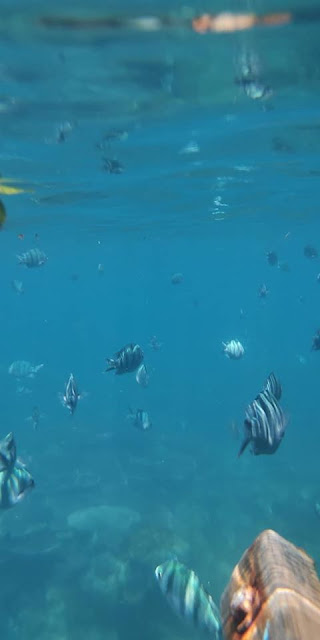 I took my smartphone under water and snapped many happy fishes swimming in the ocean. It was a joy to see them and a real pain when my whole body was bitten by the playful fishes!! 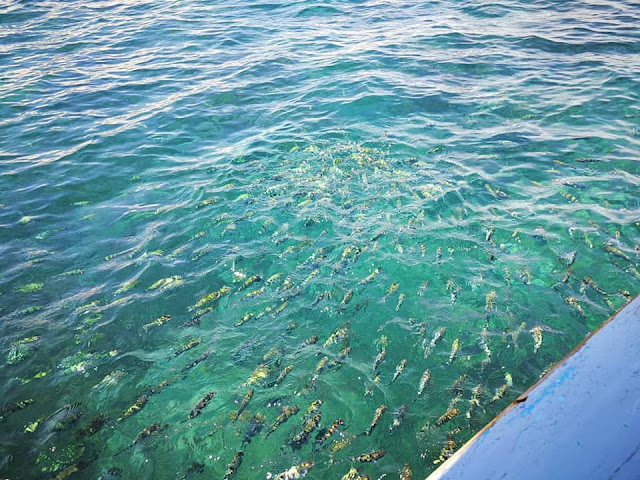 I kept looking at the millions of fishes swimming. It made me reflect so much of my existence and to live a meaningful life on earth. Time and Tide Waits For No Man. Remember this always. 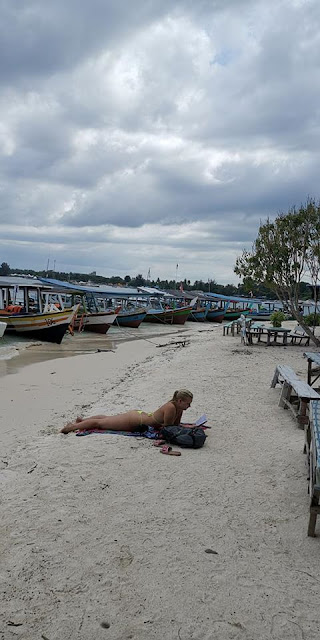 We will be back again.

on April 15, 2020
Email ThisBlogThis!Share to TwitterShare to FacebookShare to Pinterest