Of late, I started asking a few close contacts this question. They all gave me the most shocking looks for so daringly to pose such questions for both of them to ponder about their trusts for each other. Somehow I could detect and smell something fishy with either spouse with my silly question. The facial guilts with reddish hot flush looks could not escape my radar. Aha!! This is something that every couple would probably have thought over at least once, twice or more. All my siblings ended up in unexpected divorces and the 3rd parties were to be blamed. Where had all the marriage vows and trusts gone to? The global weather would change yearly and so would all humans. Nothing is permanent in life and even romantic feelings could wither and fade off like the fallen leaves of the Autumn trees.
Now I myself have something to share personally. Get your coffee ready and stay calm okay. This incident happened in the May last year. Do you remember that I made a trip to South Korea to have a reunion with my college friends in US? Oh well, you can click HERE to read if you have not.
My wife had long planned for her hiking trip with her gang of hikers to climb and trek their way up to the Annapurna Base Camp somewhere in the Himalayan Mountains. She had to fly to Nepal to meet the gang of hikers who had previously trekked up together to Lombok's Mount Rinjani in Indonesia. My IRONMAN classmate was the Captain for all their hiking expeditions where everyone truly enjoyed. My wife was busy packing for that hiking trip and we went shopping several times to make sure that she was well equipped with the best shoes, backpack and minus 0-degrees winter jackets.
My wife knew that I have not met up with my best Korean buddies after we had parted ways in Pennsylvania many years ago. So she persuaded me to visit them in Seoul during her absence. Initially I refused to go as we were in the midst of planning for the opening of her Education Centre in June. I was still handling the renovations all alone by myself as she could not smell dusts, glue and plaint from the renovation as it would trigger her asthma attacks. Somehow, she assured me that the renovations would have completed just before her hiking trip to the Himalayas. So I should go!
My Korean buddies were all excited and overjoyed about my sudden visit. There was a countdown and endless texting to welcome me to South Korea. Finally, my heart felt so light and so happy to be able to meet up with the craziest bunch of friends who introduced me to authentic Korean cuisine and the drunken nights of Soju drinks. We also had so many Winter snow fights around North America besides going skiing at the Seven Springs Mountains in Pennsylvania. So much precious memories. My thoughtful wife knew exactly how much I looked forward to the trip to Seoul.
So, I decided to book my Air Asia's flight to Seoul on the same morning as my wife's departure to Nepal. We both carried all our jackets and dragged our luggage to the waiting GRAB car at 4.00am. 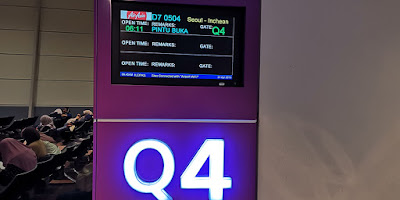 My departure flight to Seoul was 6.45am from KLIA2 while my wife's flight to Kathmandu was at 9.50am by Malindo Air which departed from KLIA1. Once I boarded the terminal upon checking in my luggage, my dear wife took the KLIA train to proceed to KLIA1 which is just a short distance away. I texted my wife good bye when I had settled down at my seat inside the plane. She would take a nap at KLIA1 as she had over 2 hours time to kill. 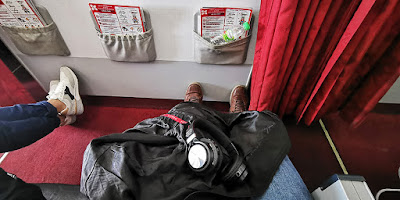 My long flight from KL to Seoul's Incheon Airport was over 5 hours. I paid the premium price to purchase the front row seats for a 6 footer to enjoy maximum comfort. That was also the "Quiet Zone" section which needed extra top up and it gave me a blissful flight all the way to Seoul. My head and mind had drifted to Korea instantly.
My best friend was waiting eagerly for me as I made my way out like a K-Pop celebrity from the Arrival Hall inside Incheon Airport. He fetched me to have tea and dropped me off at my hotel in Itaewon. 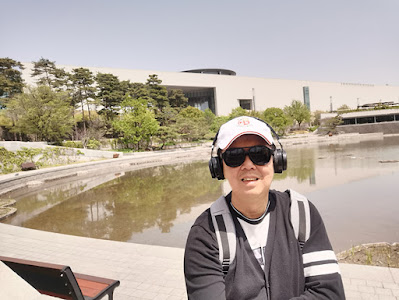 The above photo was taken outside the National Museum of Korea.
My Korean buddy took very good care of me throughout my stay. We had all the best food with the best drinks. His wife who is the President of a Korean bank had insisted that he must give me the best VIP treatment throughout. I guess she was eternally grateful that I offered his whole family the free shelter to stay with me in KL during the height of the nuclear war threat between North and South Korea.
I was thinking of my wife day and night during my stay in Seoul. I delayed coming to Korea for years as I wanted my wife to come along with me to meet all my buddies and their families. I anxiously checked my Captain friend's facebook to see any updates as my wife had already arrived Kathmandu. I guessed that she had problems to get a local special SIM card which was supposed to be able to use along the parts of the Himalayan Mountain trails. Somehow I was not worried about my wife's arrival and safety as my Captain classmate would be on hand to receive them and keep their big group together safely. I also texted him to ask about my wife's arrival and well being but there was no reply. Looking at their hiking itinerary, their group had departed from Kathmandu right away and headed up to the base camp near the Everest. 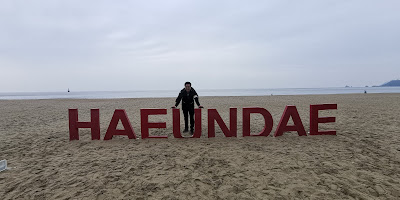 This photo was taken at Busan's famous Haeundae Beach.
Meanwhile, I had the jolly time around Seoul with my Korean friend to catch up all the long lost years. My friend had made plans and drove me all the way to Busan to meet my room mate who shared room with me in our US apartment. This guy is the architect whose filthy rich father owned buildings and many apartments around Korea. I was shocked to hear that he had divorced his first wife who sought custody of their only daughter. This room mate had remarried and has a son with the 2nd wife. The side gossip I heard was he had to divorce the first wife as she could not give him a son! I could not believe my ears as it looked like the typical Korean TV soap dramas where the chaebol families would favour sons. This is so unfair. 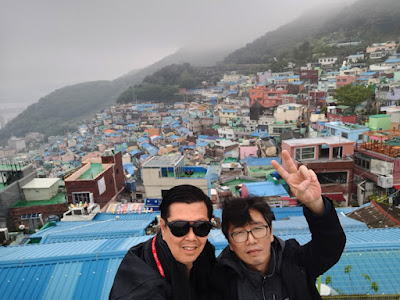 On my 4th night in Korea, I was staying at the biggest spa hotel in Busan with my best friend. That night I was so happy to receive a whatsap text from my wife at last. I knew she was safe and had reached the Annapurna Base Camp after non stop hiking in the thick snow for days. She was even more happy to hear that I had a good time with my Korean friends. The reunion was worthwhile for my whole trip with no expenses spared staying at all the best hotels. I still had few more days in Korea and had to proceed to stay at the old Prime Minister's house in Andong before heading back to Seoul for a few more days. I still had to meet up with another friend who is the descendants of The Great King Sejong who ruled Shilla (Old Korea) during the Ming Dynasty. I have nicknamed him the last Prince of Korea. My wife and I were texting each other back and forth. Suddenly I was speechless.
Finally my wife's text message read:
"I am still at home in KL"
*****
on November 12, 2020