I remember my late father today, just like everyone else. I posted these photos in my Facebook and it attracted a hundred friends of my siblings who never knew our father's little known talent. He was best known as the earliest ballroom dancers in the country. In Facebook, I would normally write 2-3 lines but in my blogs would be lengthy details for my own diary records. I might get dementia when I am old because my dad suffered from the most advanced dementia. This blog will hopefully remind me during old age that I once had the best father in my life.
Both my parents loved ballroom dancing so much and would hold dinner & dance at the 5 star hotel ballrooms during all their wedding anniversaries including the weddings of my siblings and I. The invited guests were mostly championship dancers themselves in the same social circle. The guest dancers would dress to kill and show up in their shiniest tuxedos and shiny sequined dresses to give impressive floor shows. My mother and all the female dancers would always put on the heaviest colourful make ups with fake lashes like birthday cakes on their faces! OMG! I grew up watching my parents practice ballroom dances regularly even before I went to school. I was still carrying a toy and would often doze off on the chairs for hours. Hahahaha. 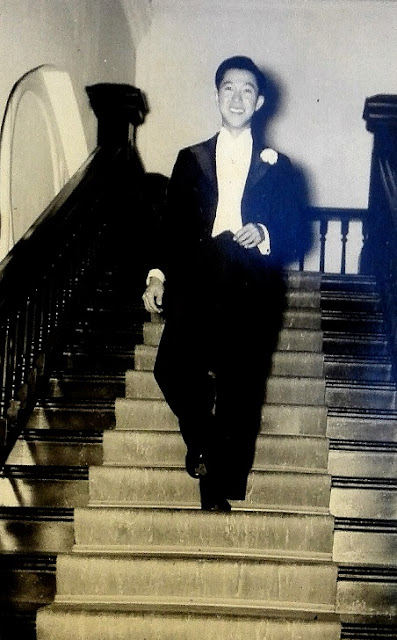 My dashing father was a London trained ballroom dancer when he was young. He was sent to United Kingdom under the Colombo Plan Scholarship to further his Chemistry studies for his occupation in the Forensics. I think he was based in Sunderland and promptly found time to enroll into the Royal Ballroom Dancing School of London. He graduated and won a Gold Medal in London. 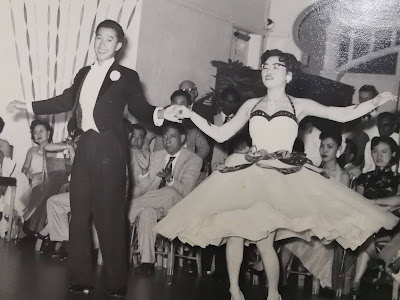 He proudly returned home and often gave ballroom dance exhibitions at so many events. It was a big thing back those days as many people were influenced by the British Colonial lifestyles. He never took part in any competitions at home as he had already won the UK's Gold Medal. 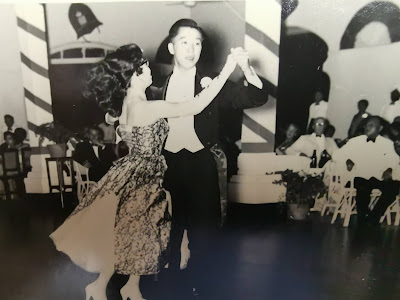 Both my parents loved to dance Venetian Waltz the most as mum said it was the most graceful and classic style with the serenading music. Besides that, they were able to do the normal waltz, tango, quick steps, fox trots, cha cha, jive, rhumba and many others. 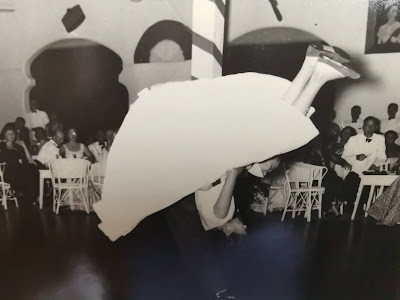 Ballroom dancing was obviously in my parents' blood throughout their lives. They would waltz happily and lovingly from Penang all the way to Blackpool and Leningrad. Just for your info that Blackpool in England is the world stage for the best ballroom dancing competitions. They would fly all the way there to watch with close friends. You bet, they took the dance floor after the competitions to leave their memorable footprints there. As for Leningrad in Russia, they were guests invited by the Thai Ambassador in Moscow who took them to watch the famous Leningrad Ballet performance. The diplomats admired my parents' dancing passion and brought them to dancing halls there to enjoy. 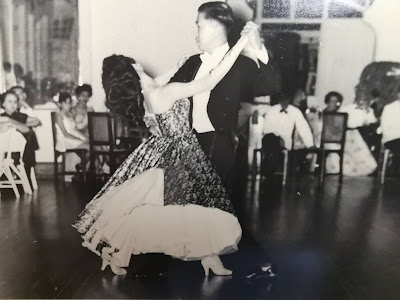 My mother had all her dancing dresses and shoes specially custom made. You would not believe that she used to ask a known shoe maker in my hometown to make her dancing shoes that lined with shiny sequins and suede bottoms. The humble shoe maker had a small son who grew up later and became the world famous Jimmy Choo. We all know that he was the most perfect shoe designer for the late Diana, Princess of Wales.
(** My mother's photo was not inside the above photos)
My Dearest Papa,
Happy Father's Day to you in Heavens.
My next posts will be:
1. My Wedding Anniversary
2. Computational Thinking @ Taman Desa
****
on June 21, 2021

The Power Of Crystals 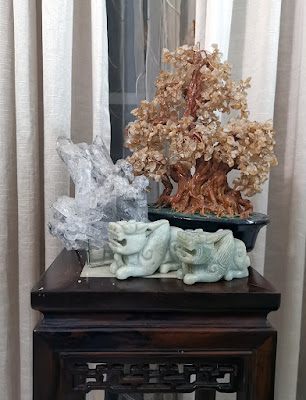