It is a known fact that there are 4 sacred Buddhist mountains in China with recorded history dating back to few thousand years ago. It has been my wife's "Bucket List's" wishes to climb all the 4 and even if I refused, she would go alone on her own! So I had to push myself hard to tag along too. So far we have scaled the Mount Hua in Xian, Mount Jiuhua in Anhui Province and Mount Emei in Sichuan. We will cover Mount Wutai and Mount Putuo someday. 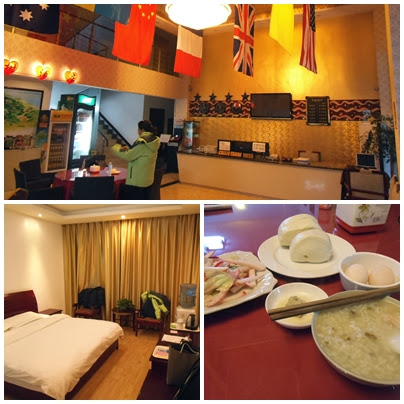 1. My friend recommended that we should stay at Happy Hotel at the bottom of Mount Emei which received 'fantastic' rating reviews online for such a small budget hotel. I realised this family run hotel provided very caring and warm service to advise us so much about the mountains besides lending us some shoe braces to wear. The lady boss also packed home made mantou buns & boiled eggs for us. She was just like a mother to me! I liked that!

The temperature was like -2 Degrees Celsius and I was frozen like ice! The room was freezing but we slept well with the electric warm blanket. Other 5 star hotels could be warmer but they didn't receive good ratings like Happy Hotel. 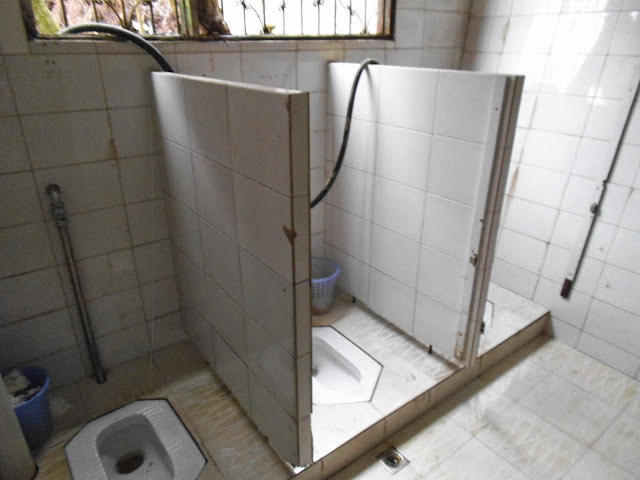 2. The next morning we took a 2 hour bus ride from the main road up to Mount Emei. Halfway, we stopped at small shop arcades to use their "Signature Toilets" which do not have doors! This one looked bearable to me. I have seen several which the partitions were just 2 feet and the men all shared a common drain to drop their poohs! At every hour. the worker would use a hose to flush all the feces down the drain!! The men could smoke and just chit chat with each other while squatting down. So fun to shit together in China! Oh My Gawd! Bluek! 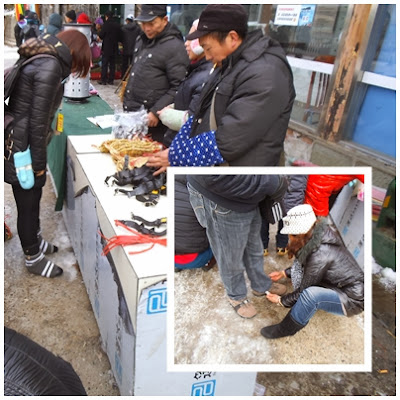 3. We reached the bus terminal at the foot of snowy Mount Emei to start hiking up. We had to rent their iron spoke braces to clamp beneath our shoe soles to hike on the ice steps and snow. It costs 20 Remenbi rental with 80 Remenbi deposit. 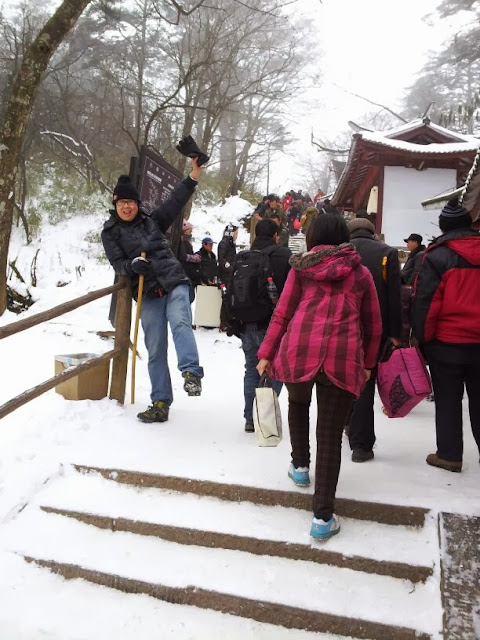 4. Off I went up the steps and it was so bloody cold below the clouds. It was like -10 degrees with white thick snow everywhere! Many idiot people did not rent the protective shoe braces and fell down. Some brainless ladies wore high heels to look pretty & walked up. They also fell flat many times like clowns. Aiyo it was so bloody dangerous! Never die before la. 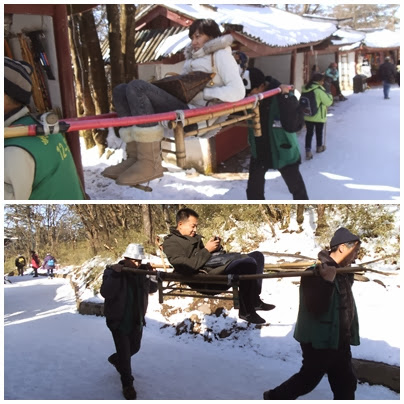 5. Some rich sohai fellas hired the workers to carry them up and down. Oh man, it was such a long journey and it's no joke!!! The hike was some 2 km to reach the Cable Car's station midway and another 2 km hike at the top station to reach the summit!!! It was thick ice and snow all the way. 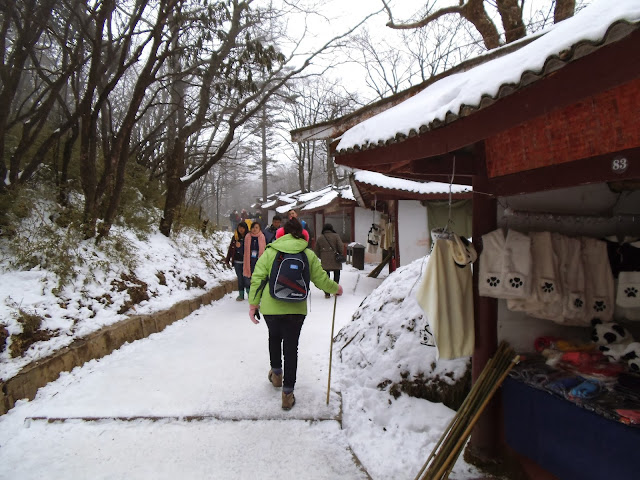 6. I love my wife the most in this world and would obediently walk behind to make sure that she was alright. Actually I was also panting so hard like a sick dog behind as I could not breathe the thin air! Muahahahaha 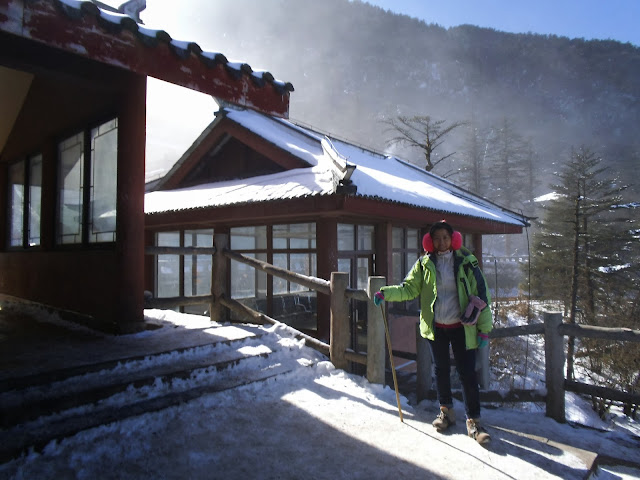 7. We reached some small cottages halfway. As usual I must pretend to take photos so that I could rest my aching legs and bones otherwise the other CB folks would laugh at me. Even the 80 year old grandmas had better stamina than me. No kidding! 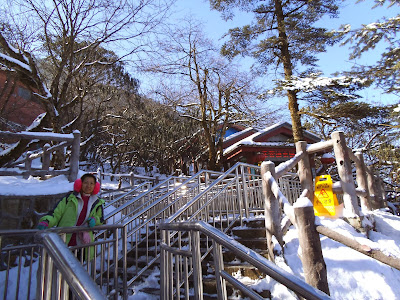 8. Finally we reached the Cable Car Station which shortened our hike other wise it would be another 10 km of walk. 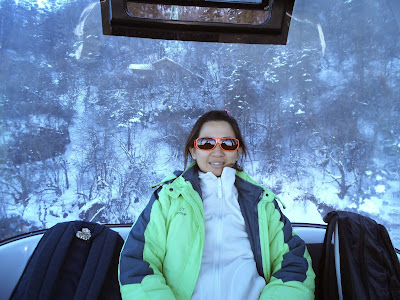 9. It was all white, snowy, frosty and blurred my photos.
Hey my camera was brand new and good one leh. So kiasu me. 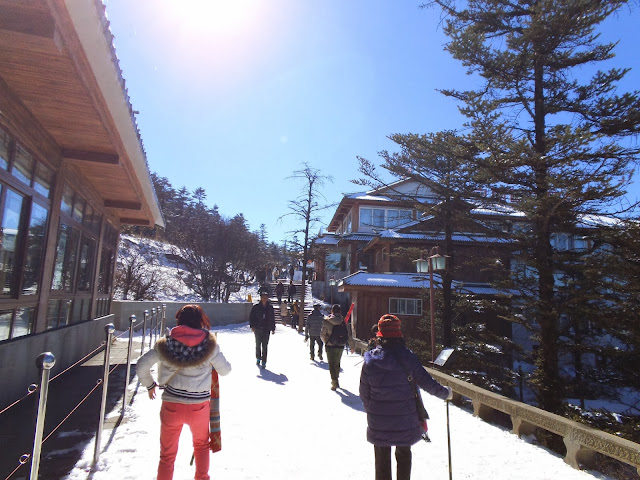 10. We reached above the clouds! Look at the sun!! It was so bright, hot and still cold. It was such a confusing temperature! Everyone had to wear sunglasses to reduce the white glare of the snow. 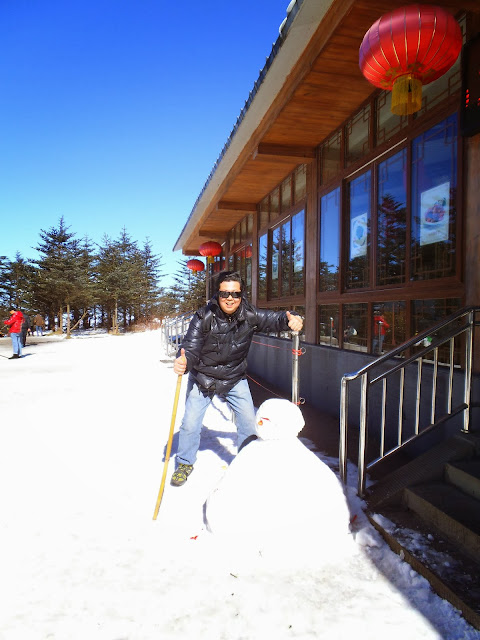 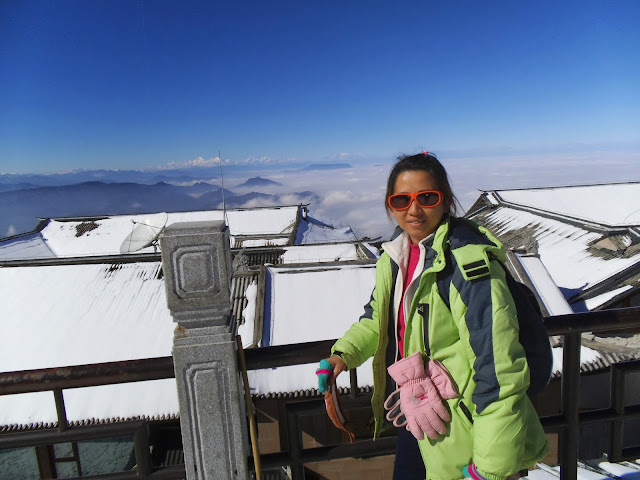 12. Look at the lovely view with clear visibility. Most people did not have the chance to see such clear skies above the clouds. I think the heavens look like this! Has anyone been to heavens & back? 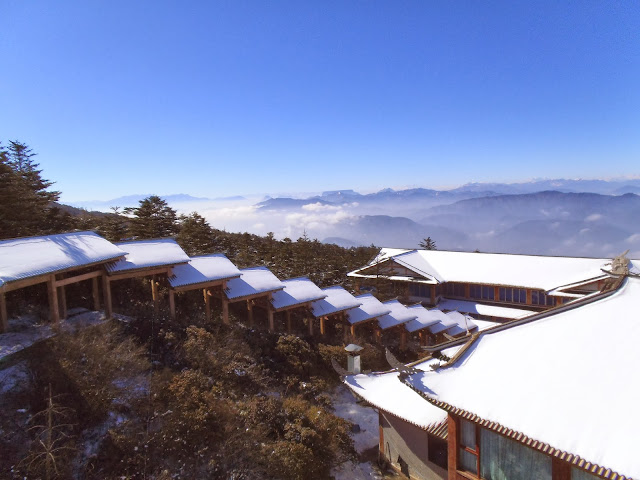 13. The snow covered the roofs of the temples below. It was a pretty sight to behold. The plateaus are there too. 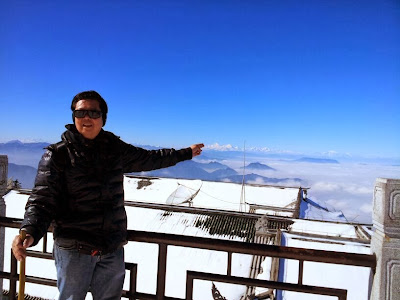 14. Look at my fingers! I was pointing at the Mountains of Tibet! Can you see Tibet? 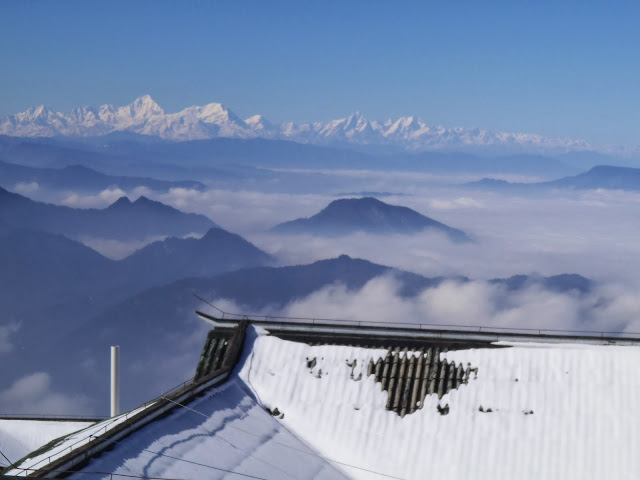 15. This is the closer view of the Mountains of Tibet. Beautiful isn't it?? Hello?? 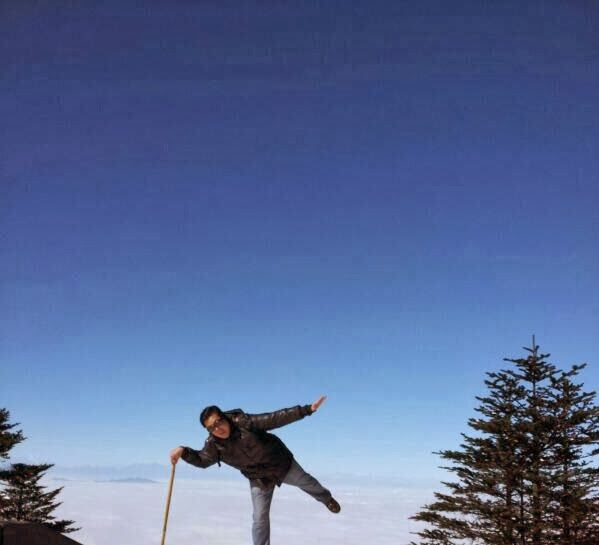 16. I reached the summit finally! Hooray! Look at the heavenly clouds below! 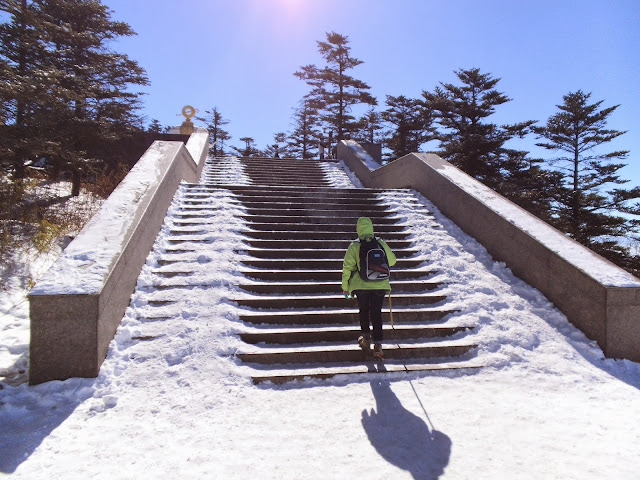 17. The final steps to reach the Golden Summit's Temple at the top. 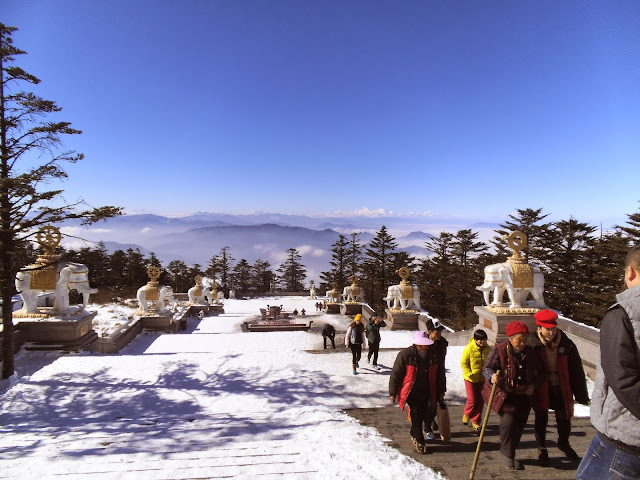 18. There are many huge heavenly elephants lining the steps up. The Bodhisattva rides on these elephants. 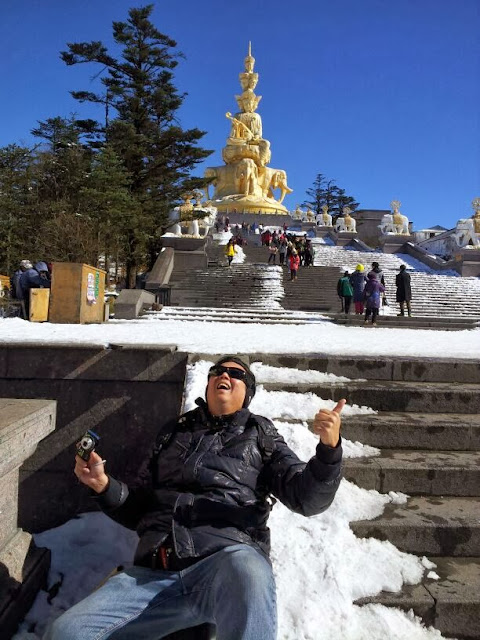 19. I was overjoyed and happy at last. 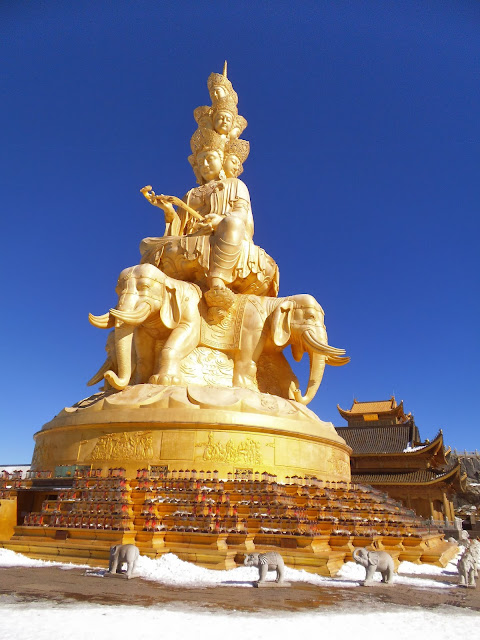 20. The Golden Summit Temple with the statue of Samantabhadra Bodisattva who rides on the heavenly elephants.
The 10 heads above signifies the 10 vows she has made. 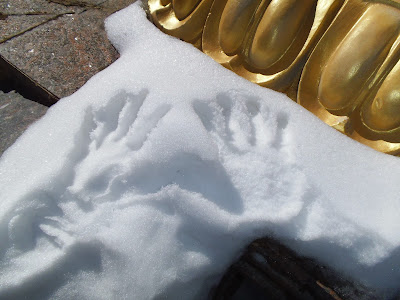 21. We left our hand prints behind.

on December 27, 2013
Email ThisBlogThis!Share to TwitterShare to FacebookShare to Pinterest