The weather was cold & gloomy during our visit to Japan in Spring as it was under 10 degrees on most days. However, it was a perfect weather when we made our way to Nagasaki to catch a boat to tour the famous ghost island - Hashima Island. So many movies have been filmed there including the current Thai horror movie - "Project Hashima" and also the James Bond's. 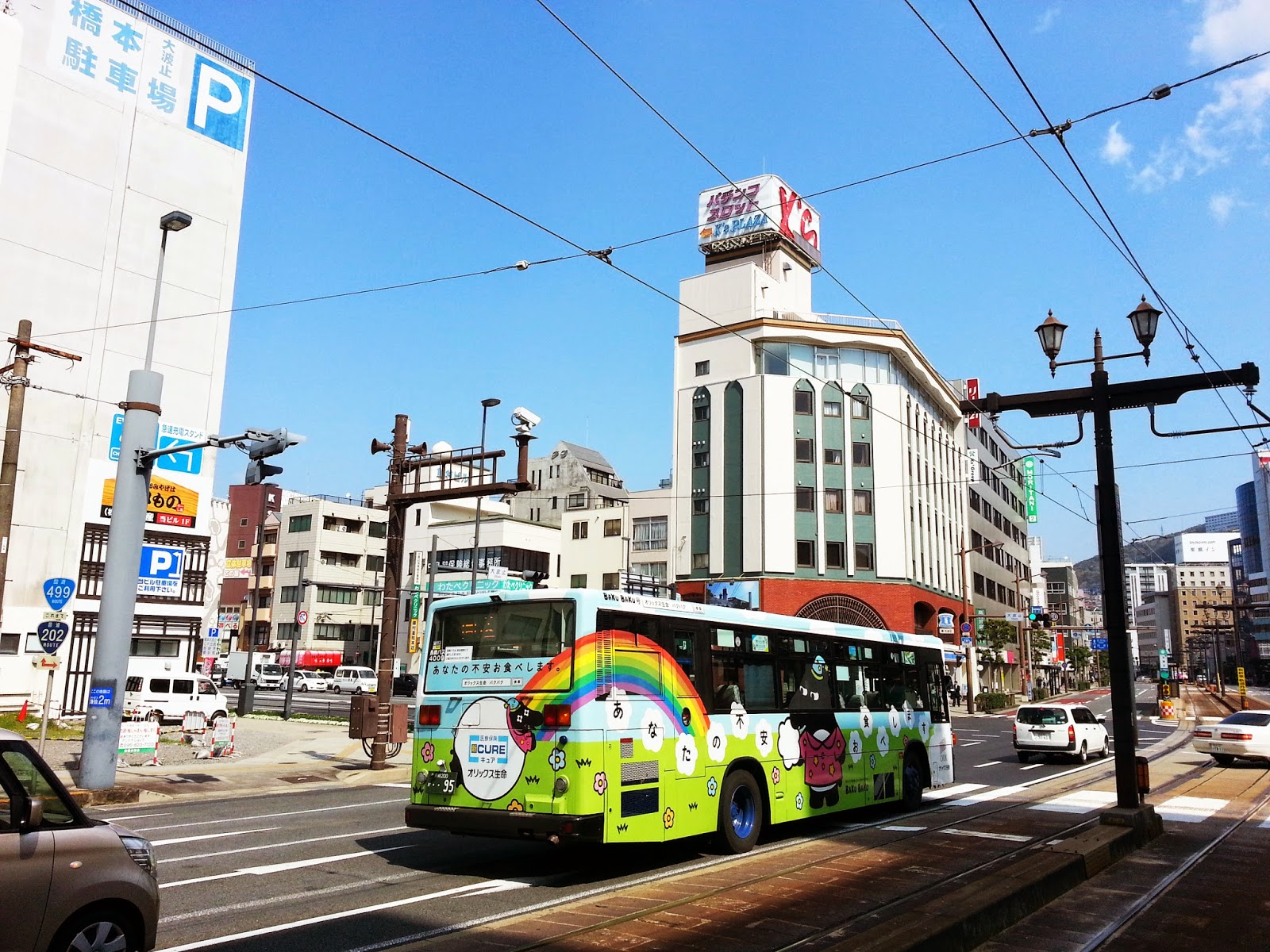 1. We took a 2 hour fast train from Fukuoka City in the morning and jumped onto a tram to reach this part of Nagasaki's town. This quaint town has been beautifully rebuilt from ashes and everyone here lives in a peace loving community. 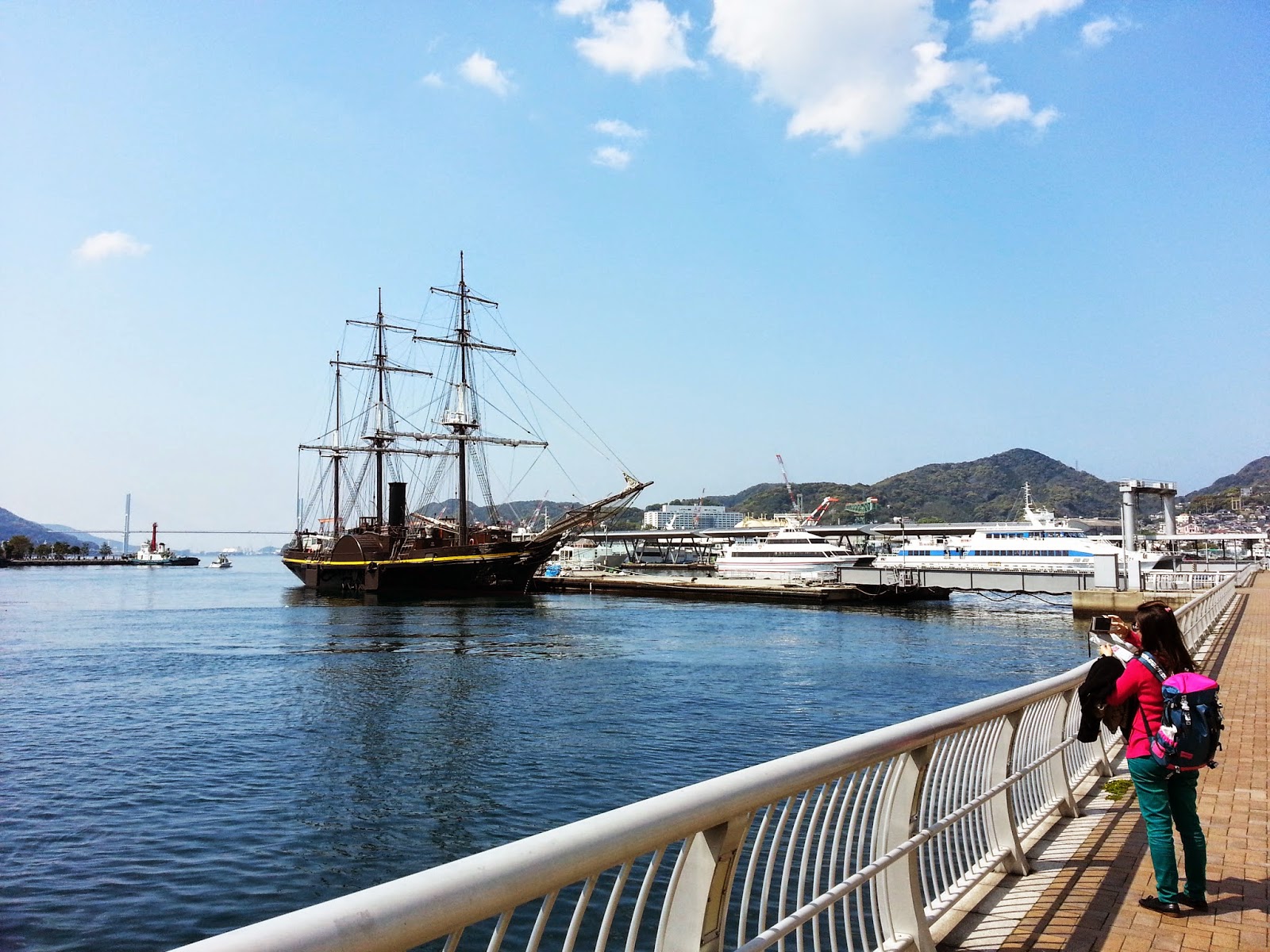 2. We had to book our boat tickets online before leaving Kuala Lumpur and signed after reading their long list of "Do's & Don'ts" as they fully protect this heritage island which has a rich history. We walked to their sales counters to collect our actual tickets and paid 3,600 Yen each. This lovely harbour lies along the port of Nagasaki. 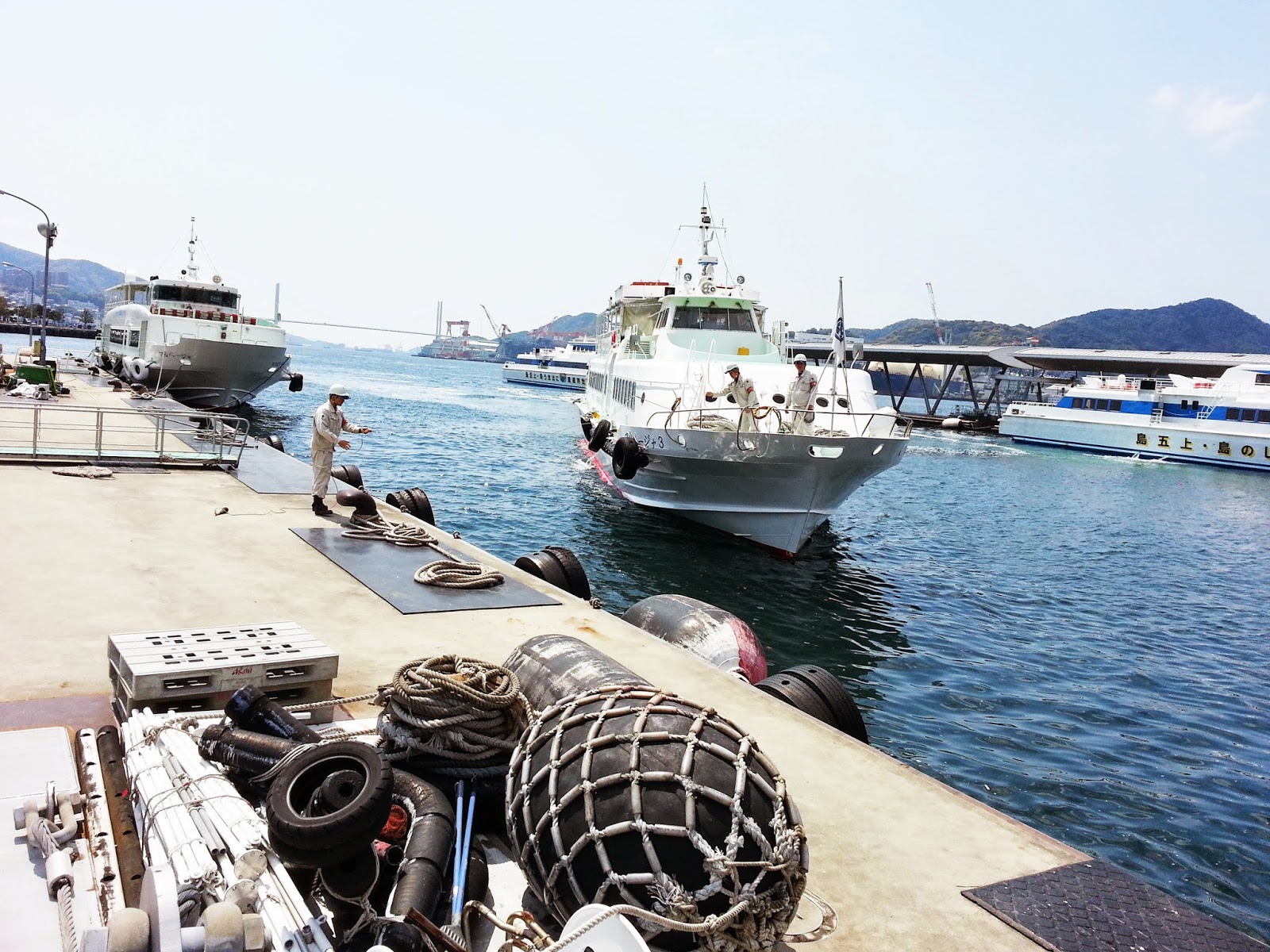 3. Our cruise boat arrived at last and so many local Japanese from other towns boarded too. 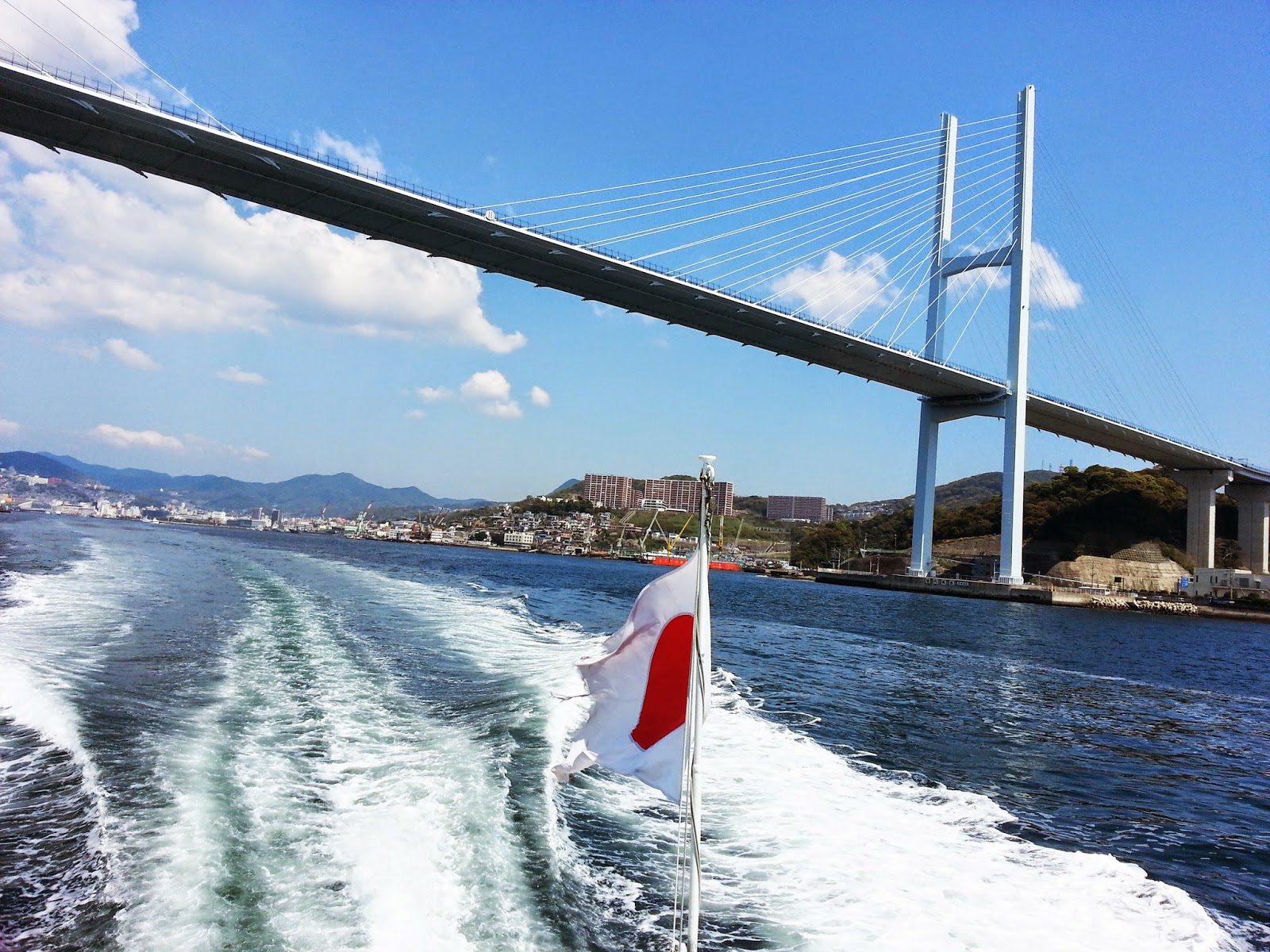 4. The double decker boat sped off very fast and the cold wind was nice! Far behind are the luxury homes that line the rolling hills of Nagasaki with their windows overlooking the ocean. 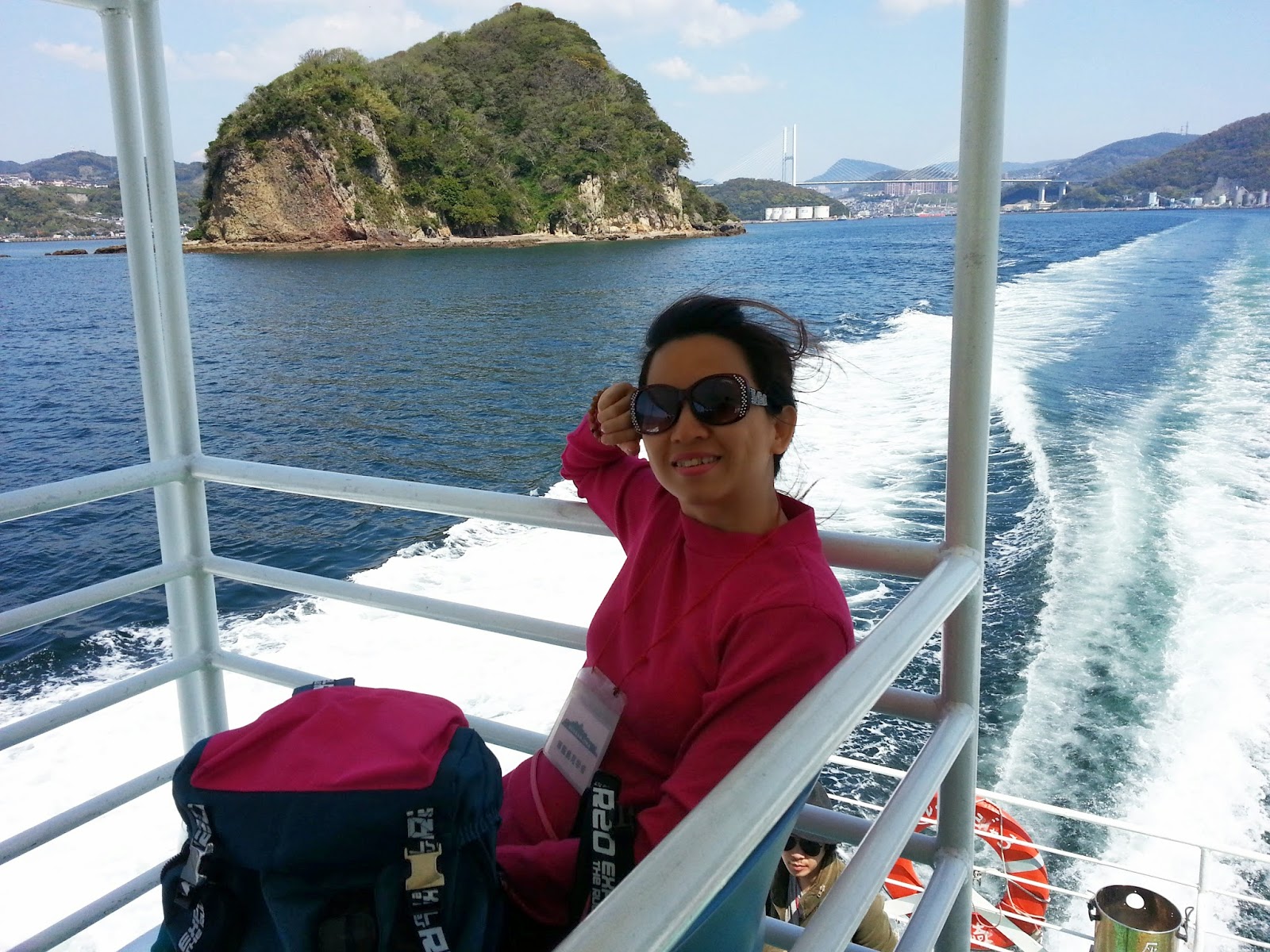 5. My wifey posed confidently like a Royal Princess of Nagasaki at the East of China sea. There are 505 uninhabited islands in Nagasaki Prefecture alone! 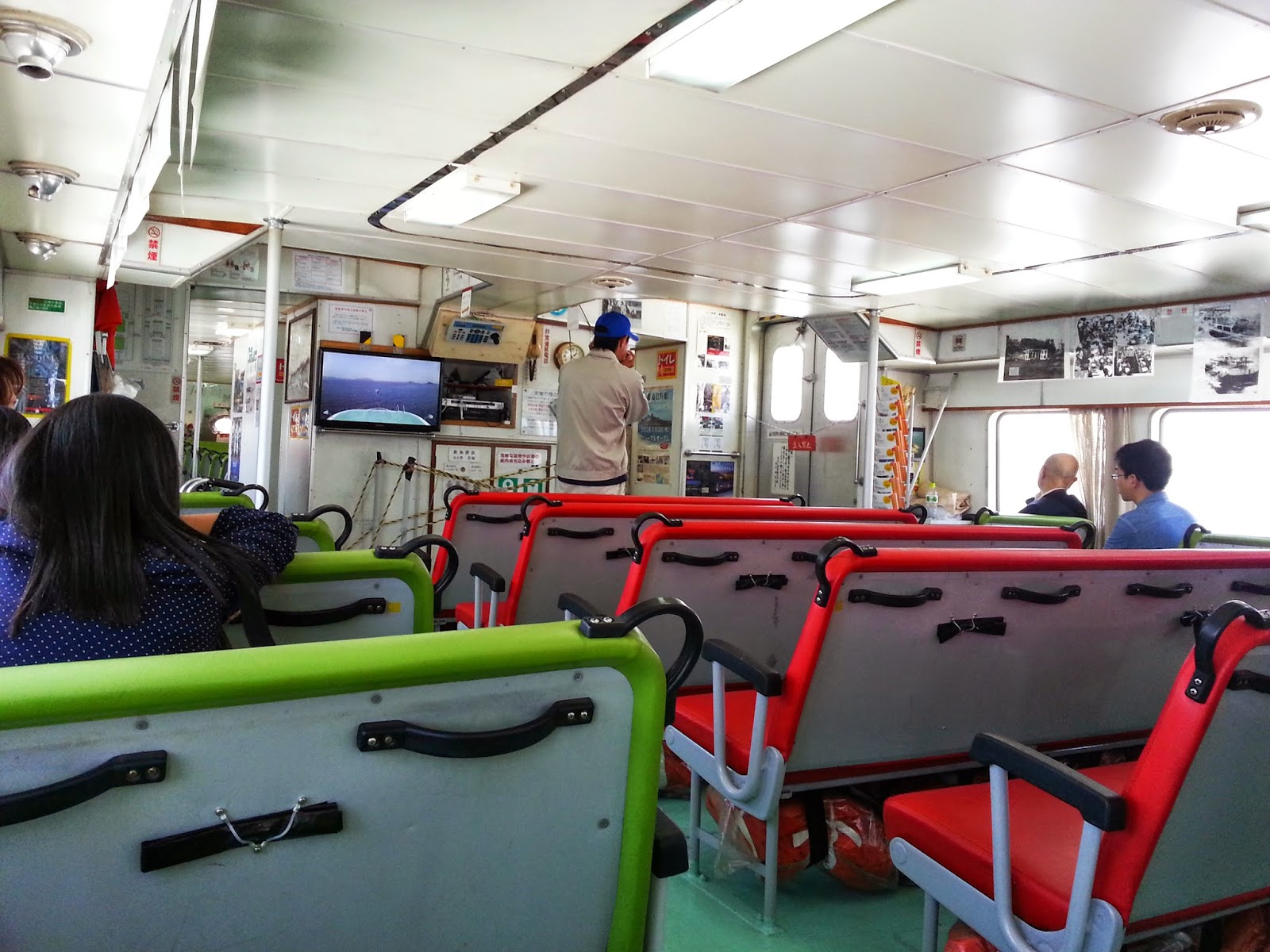 6. Most of the visitors remained on the upper deck to enjoy the sea breeze and panoramic view.
They looked like penguins as they could stand the extremes of cold wind!
We both humanoid mammals had to retire inside the cabin below as we were frozen like ice cubes. 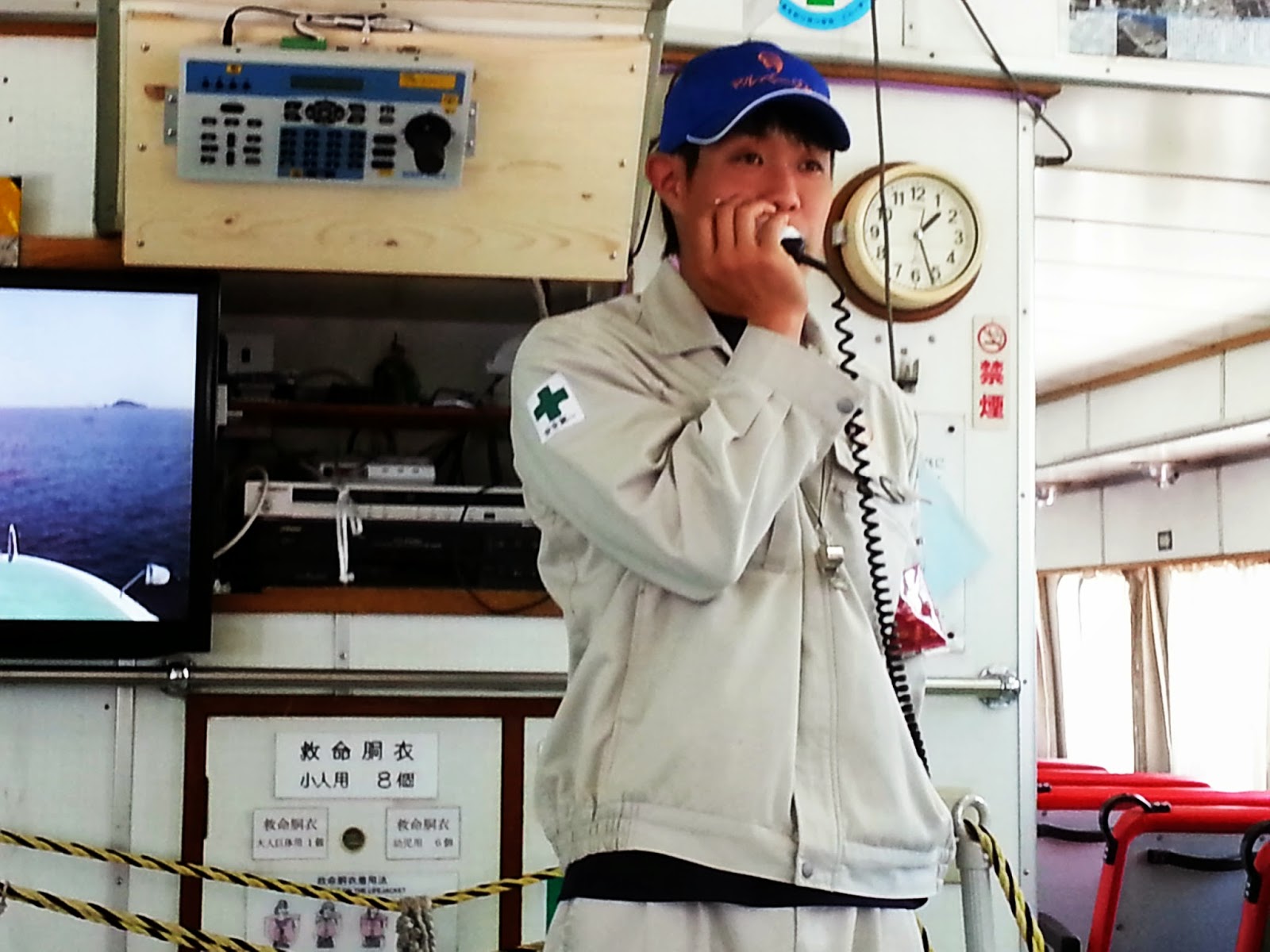 7. They had 2 young hotties taking turns to explain the whole journey to the visitors in Japanese language. Mitsubishi bought this island in 1890 and started to conduct undersea mines at the surrounding areas for coal until the 1960s when petroleum overtook the coal industry. 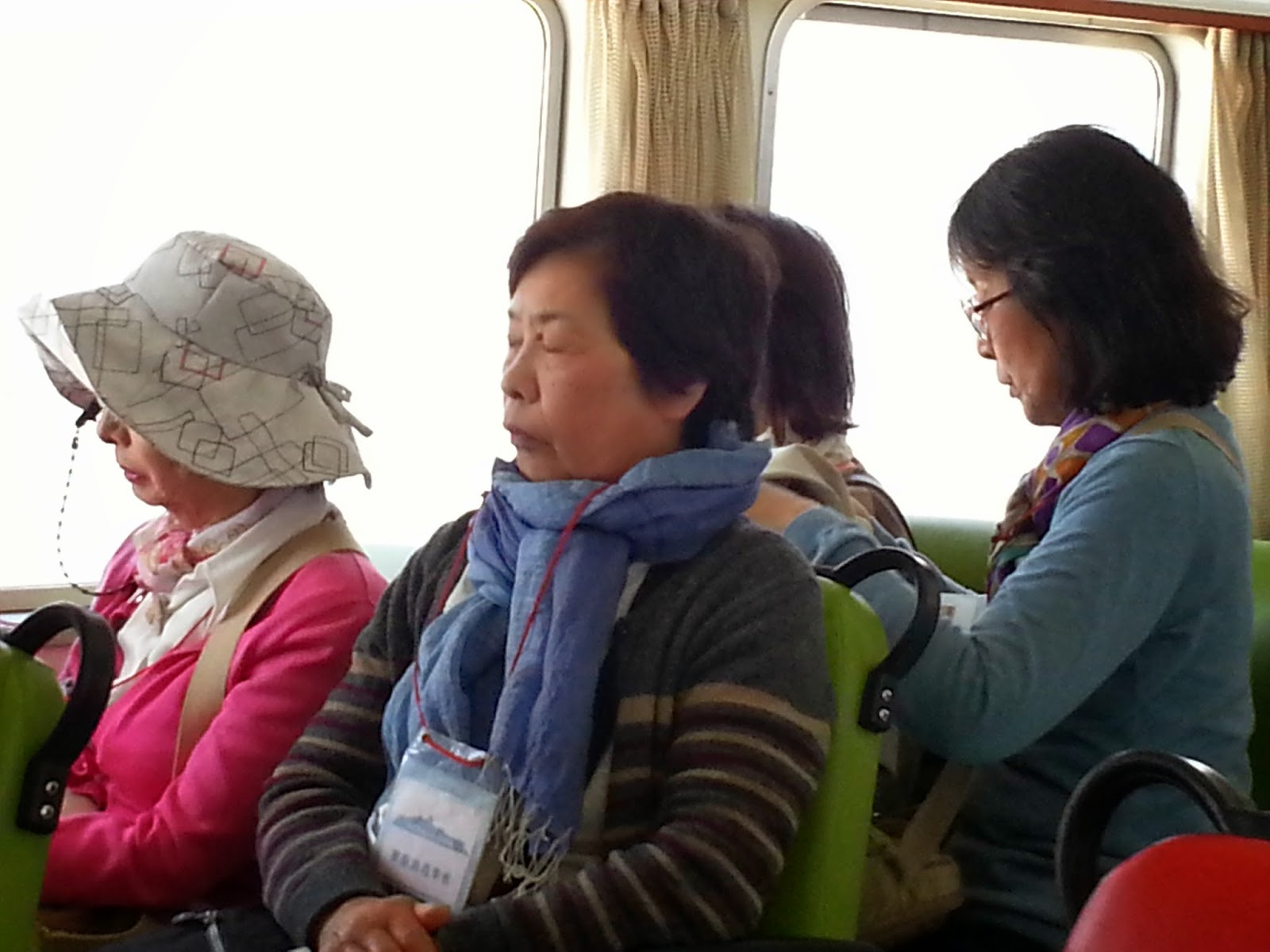 8. This lady was bored to death and went to sleep. 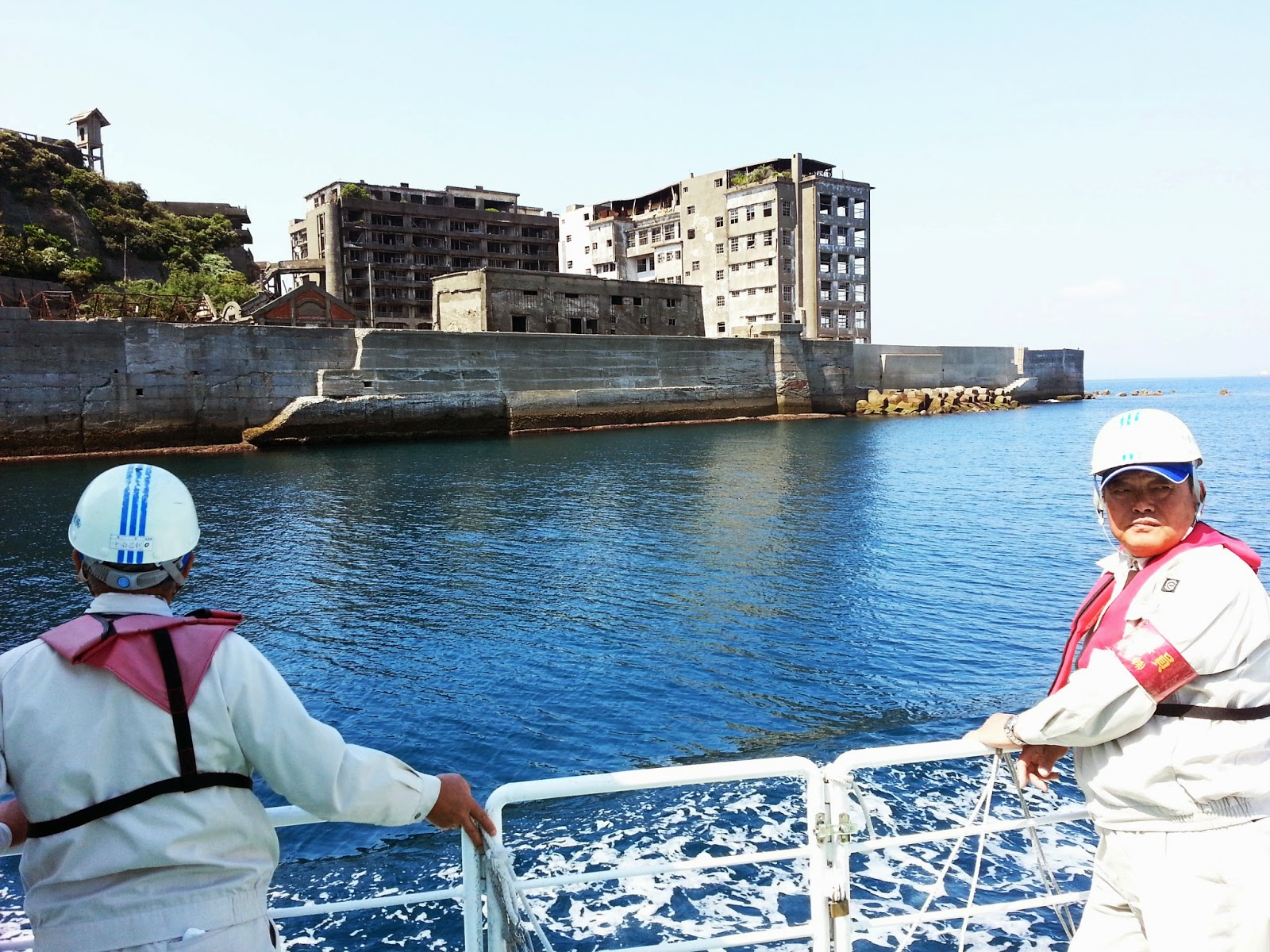 9. We finally arrived the Hashima Island after 30 minutes across the blue seas.It is also called Gunkanjima (Battleship Island) due to its shape. This island's peak population reached a total of 5,259 people and they consisted of Japanese and forced labourers from China & Korea. 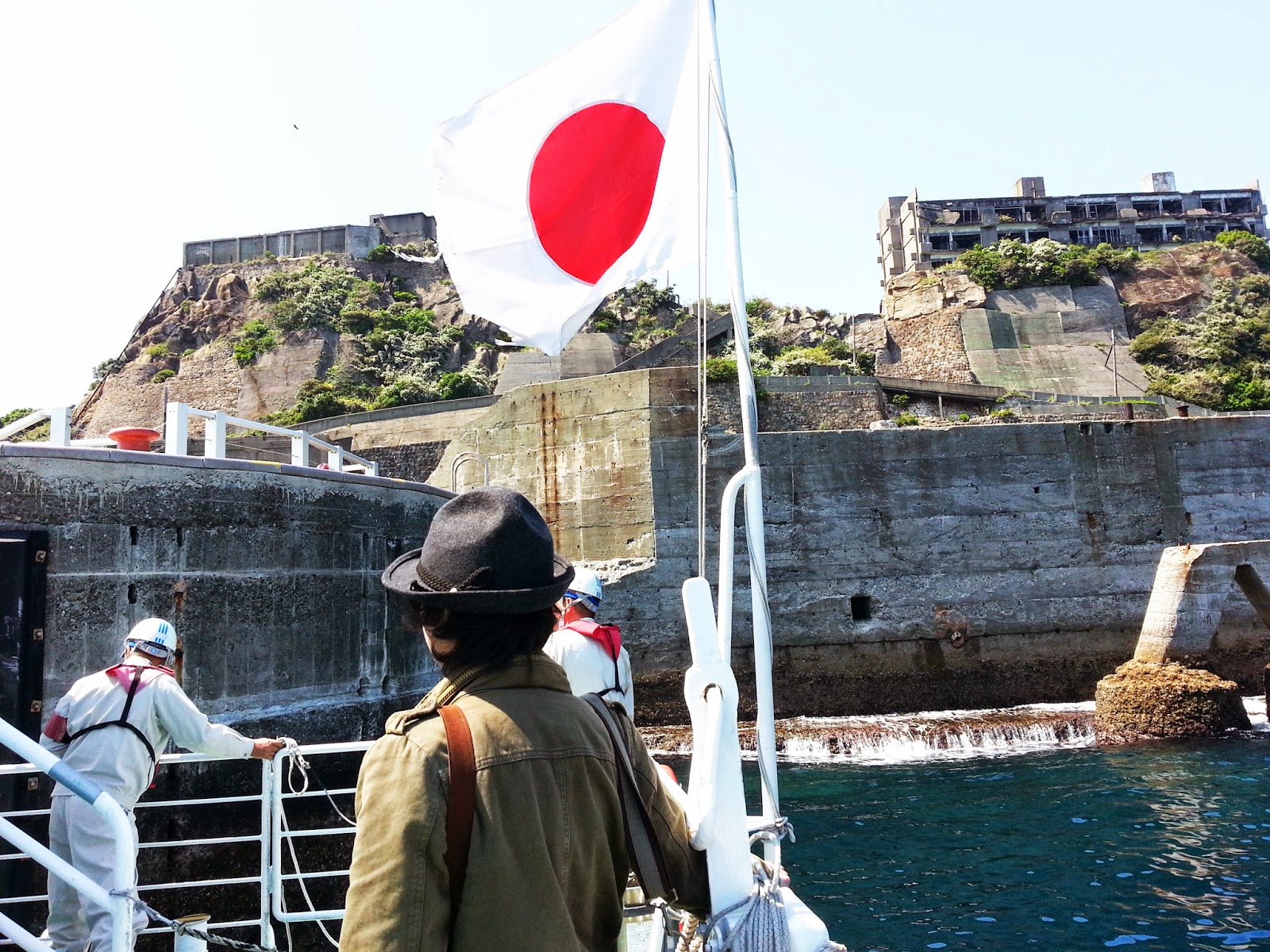 10. This very young guy with a hat is a friendly Japanese who kindly offered to take our photographs with our camera! 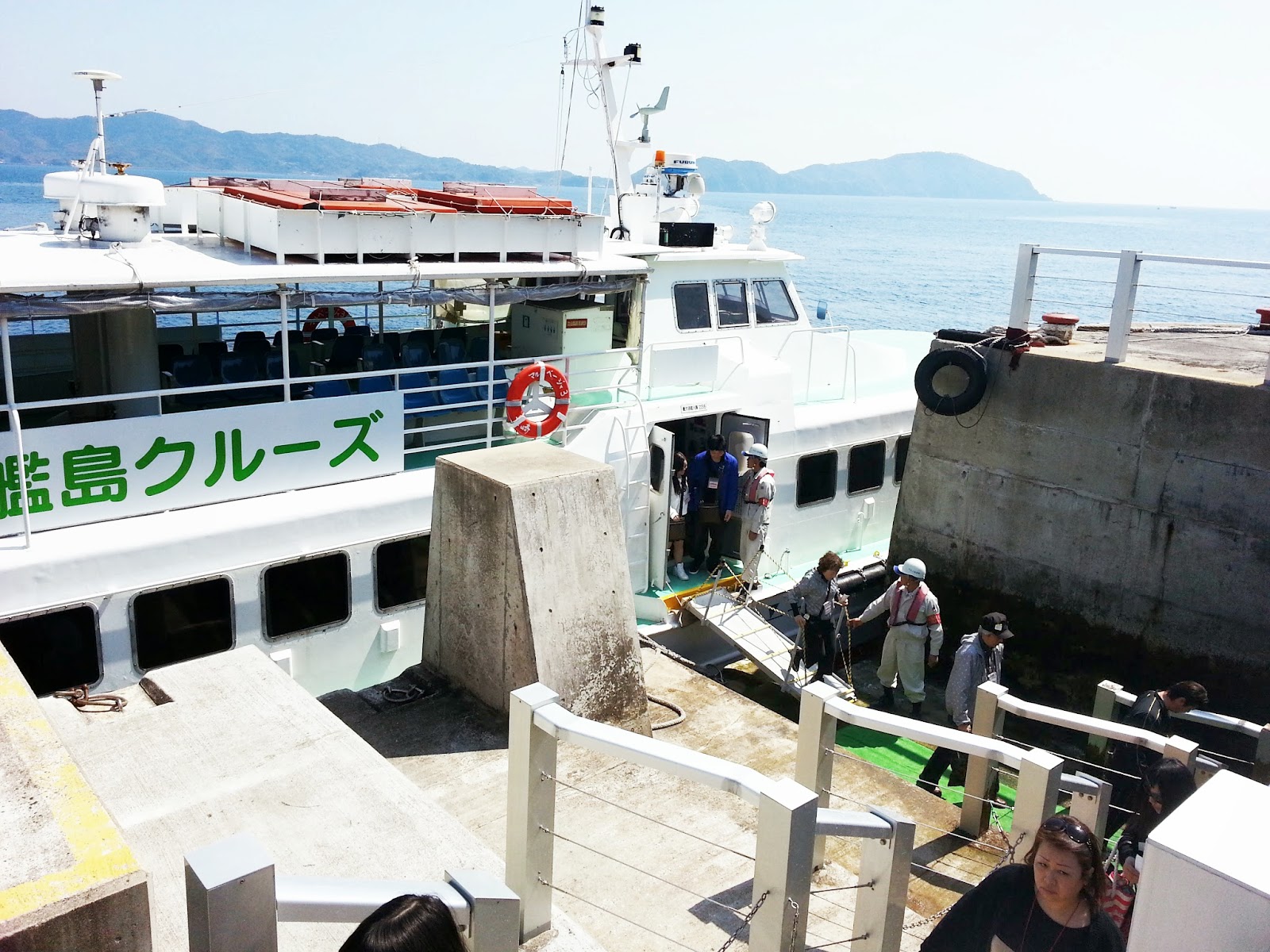 11. The boat lowered its ramp for us to walk around the ghost island. 12. They barricaded many areas off for the safety of tourists. 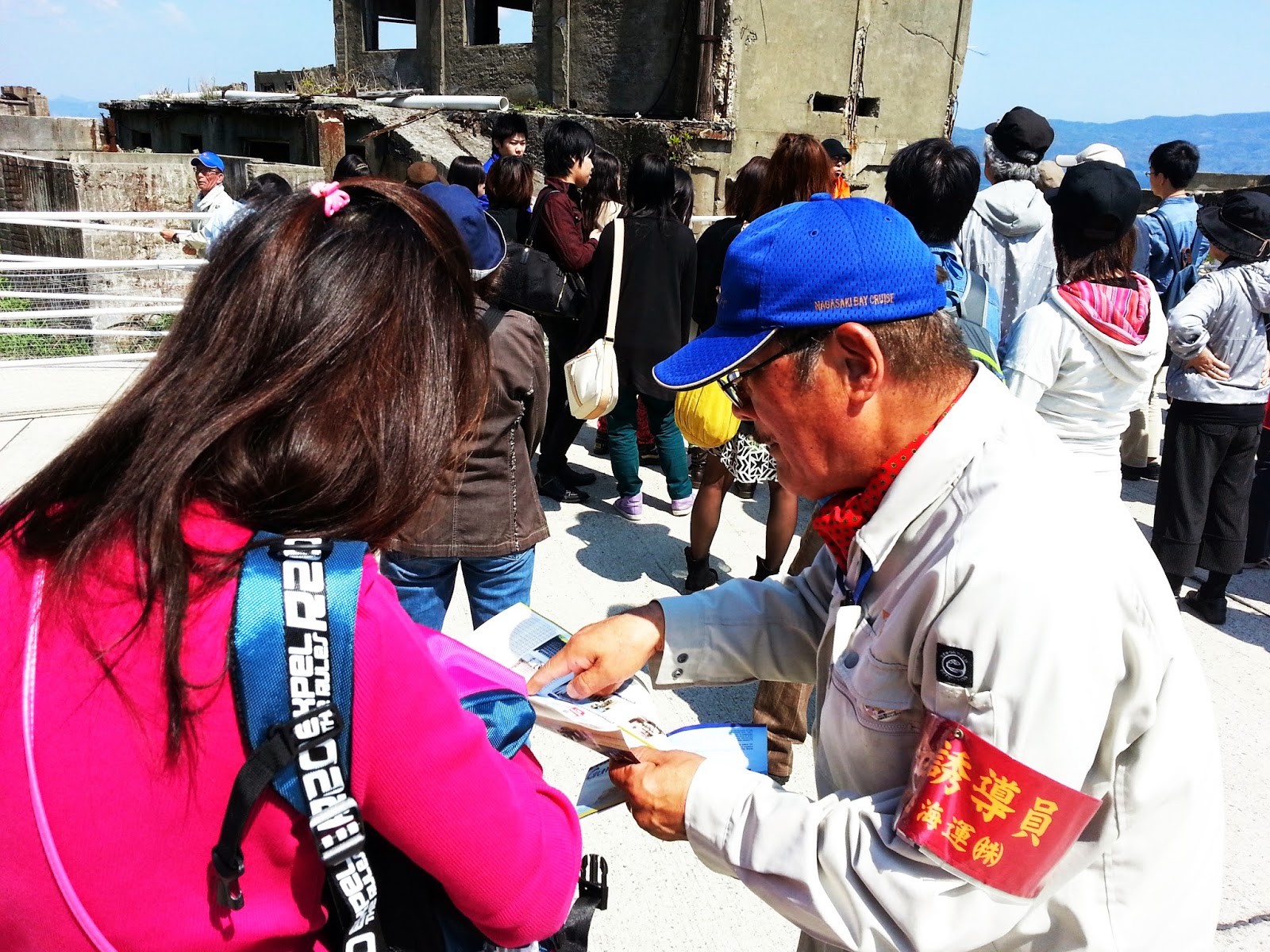 13. This crew gentleman was so kind and helpful to explain to us by pointing at the photos using sign languages. I really love the Japanese people as they have the best customer services in the world! 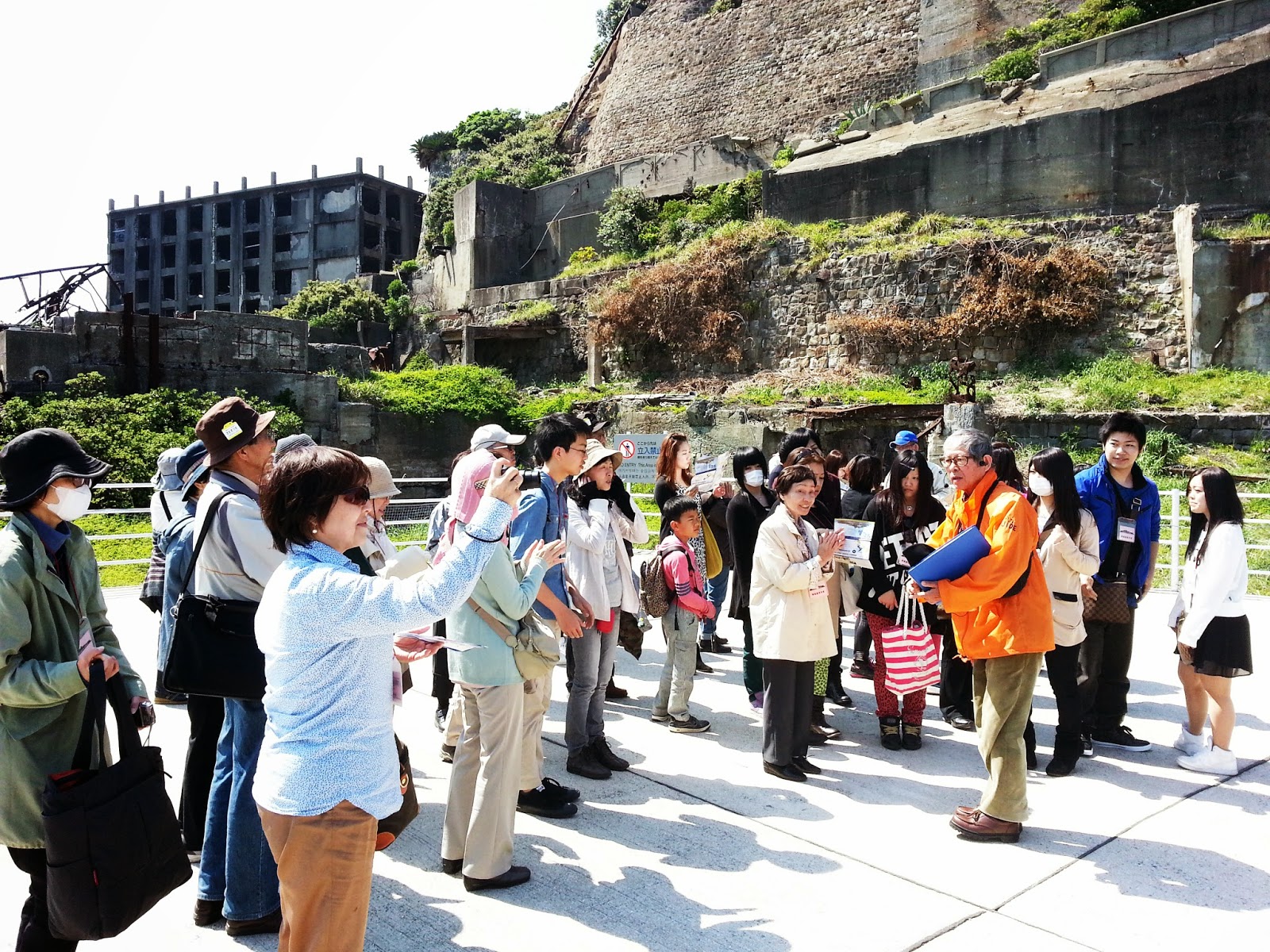 14. Their tour guides conducted several stops and briefings to share about the island's history.
There were apartment blocks, school, canteens, look out towers and even a swimming pool before the island was deserted. Everything started to fall apart on its own from the serious damages of typhoons and sea erosion. 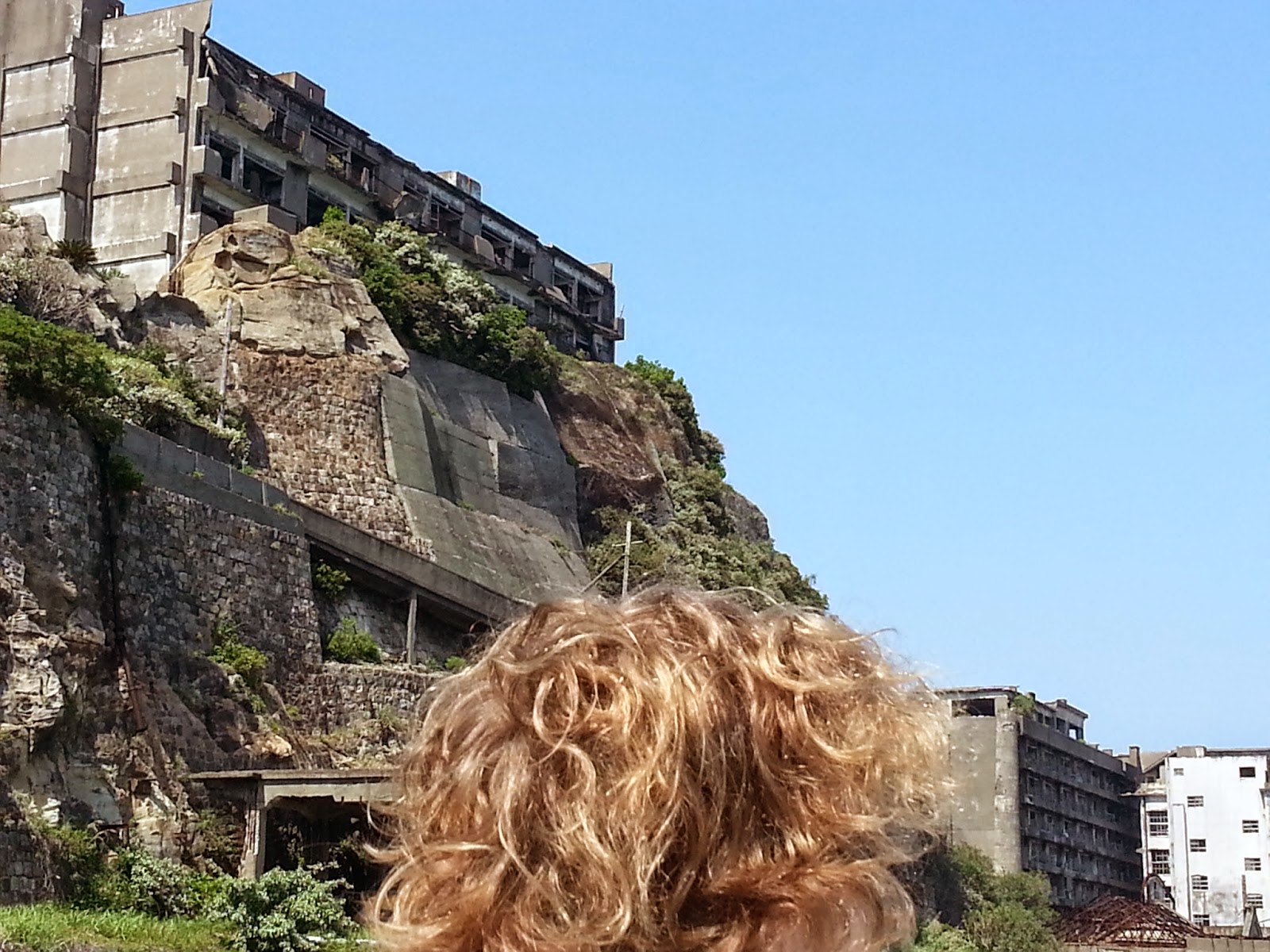 15. I thought no dogs or pets were allowed to visit. 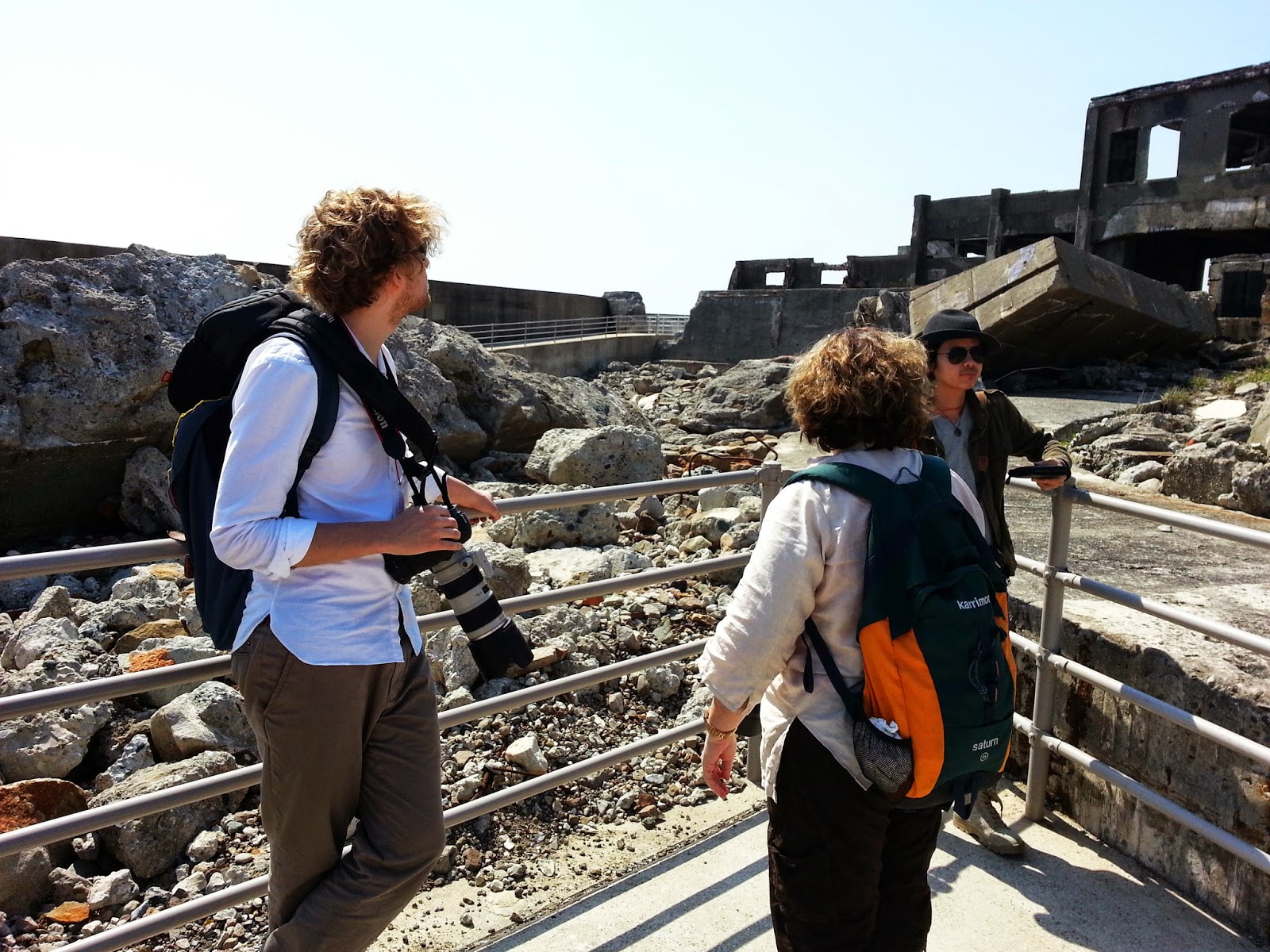 16. This is a friendly couple from United Kingdom who are both deaf & mute using sign languages & lip reading. When she "heard" that I am from Malaysia, she replied me with flying hands - "Oh that missing aeroplane!!!!!!" OMG! 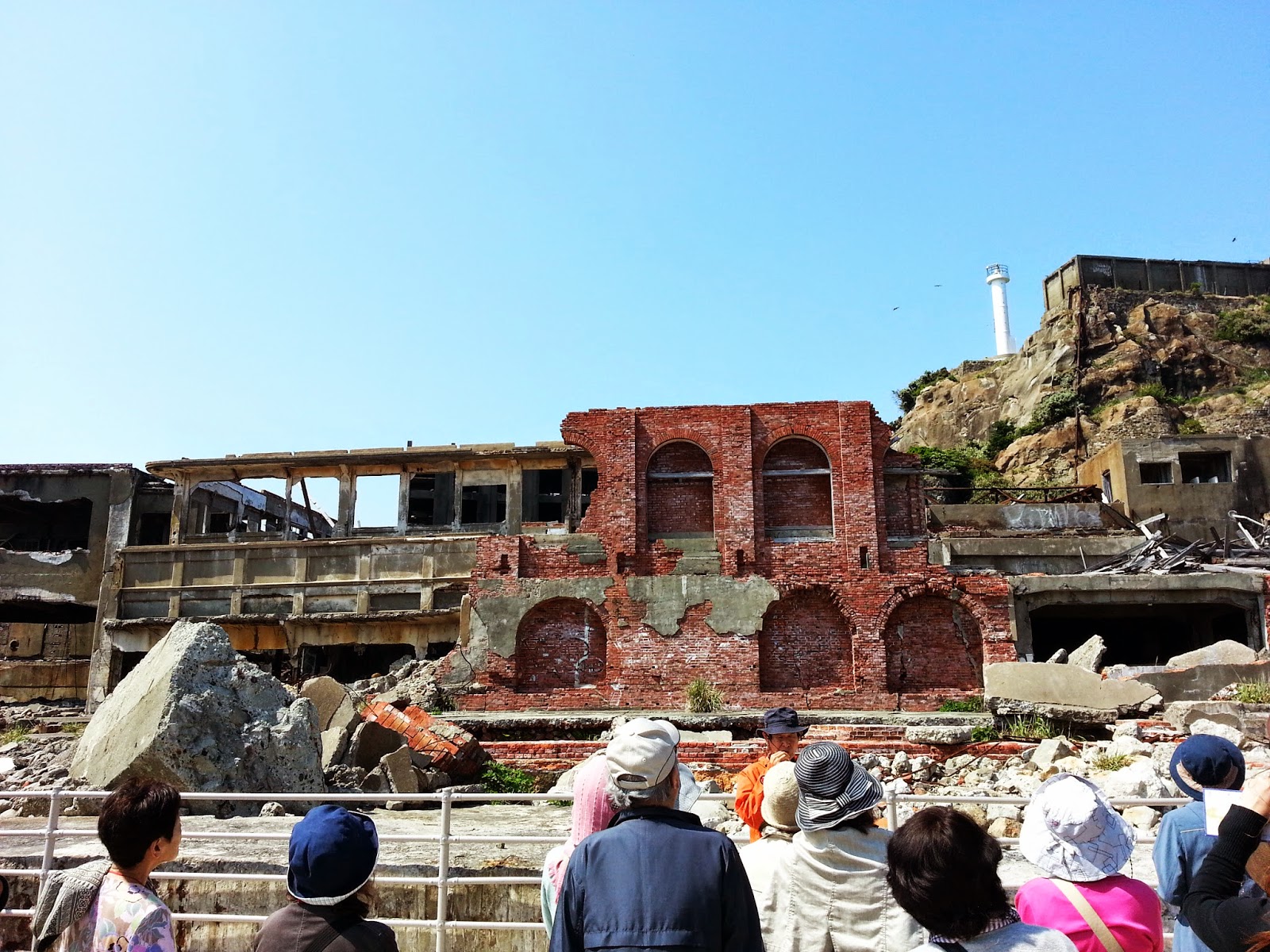 17. It was an amazing sight to see how the nature's wind and water could inflict so much damages to rip the walls and pillars apart. 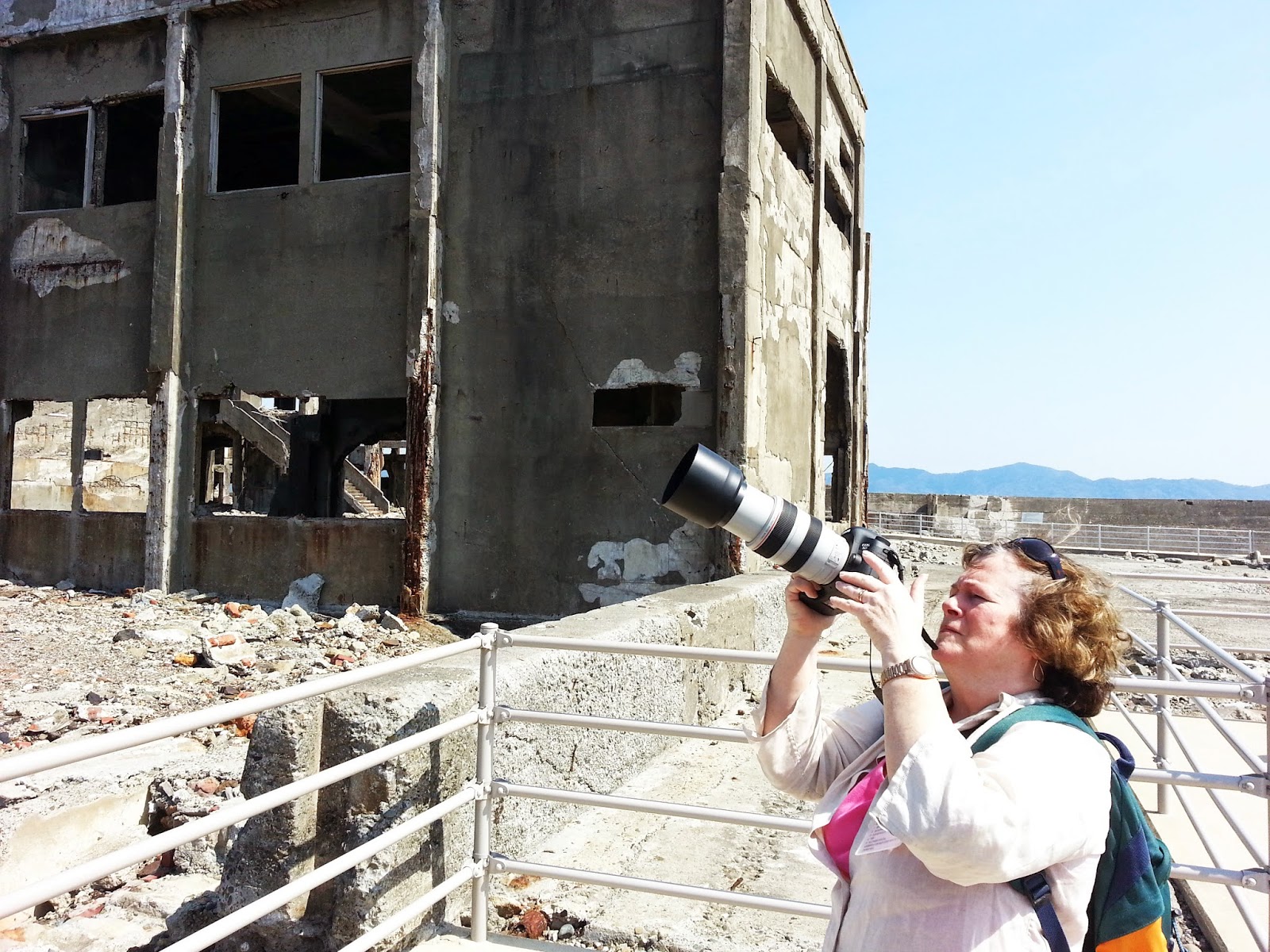 18. This lady was funny and took so many long zoom shots.
She was sure she saw a UFO! 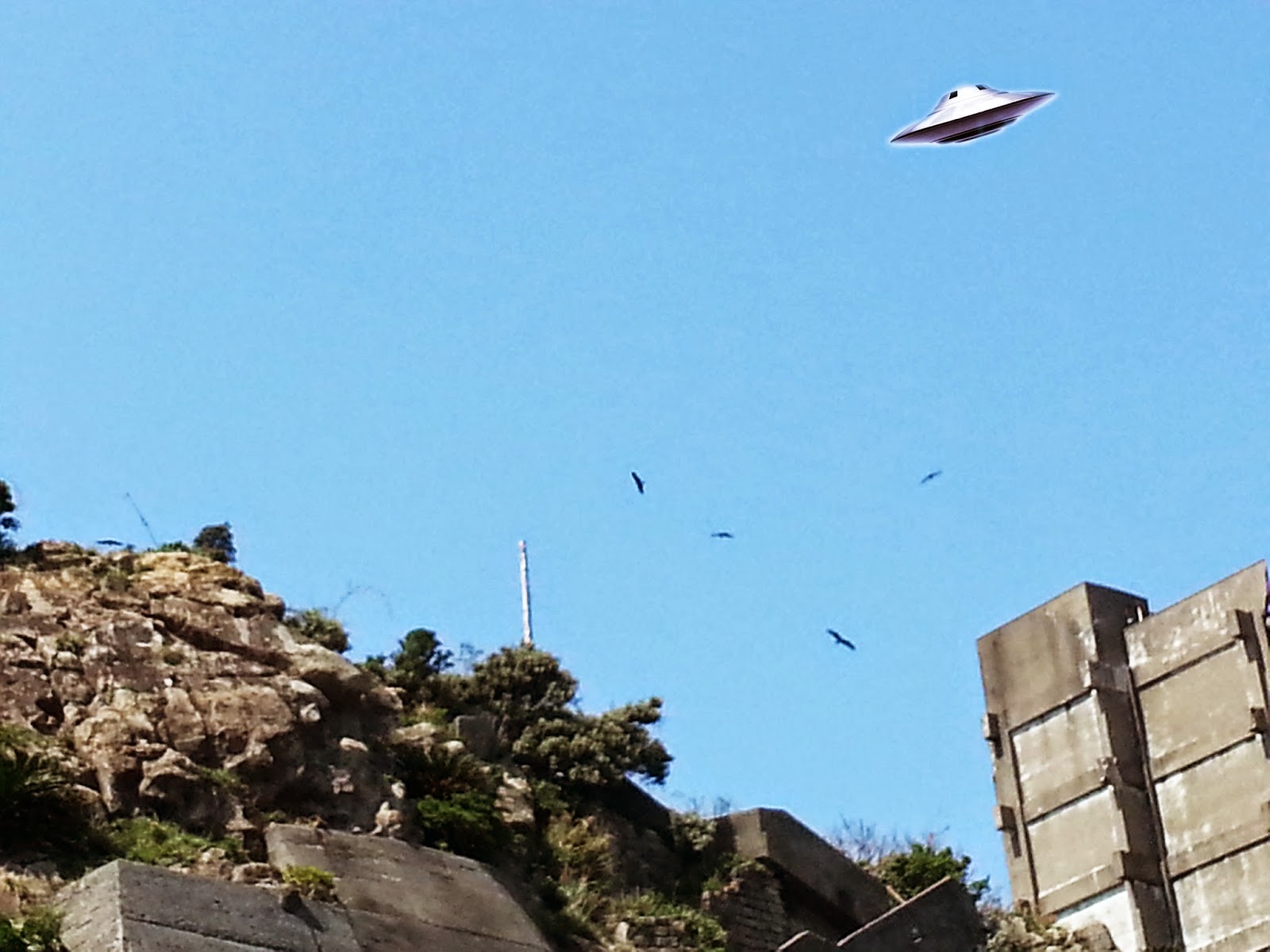 19. For the first time, I saw so many birds that looked like eagles or hawks hovering above. 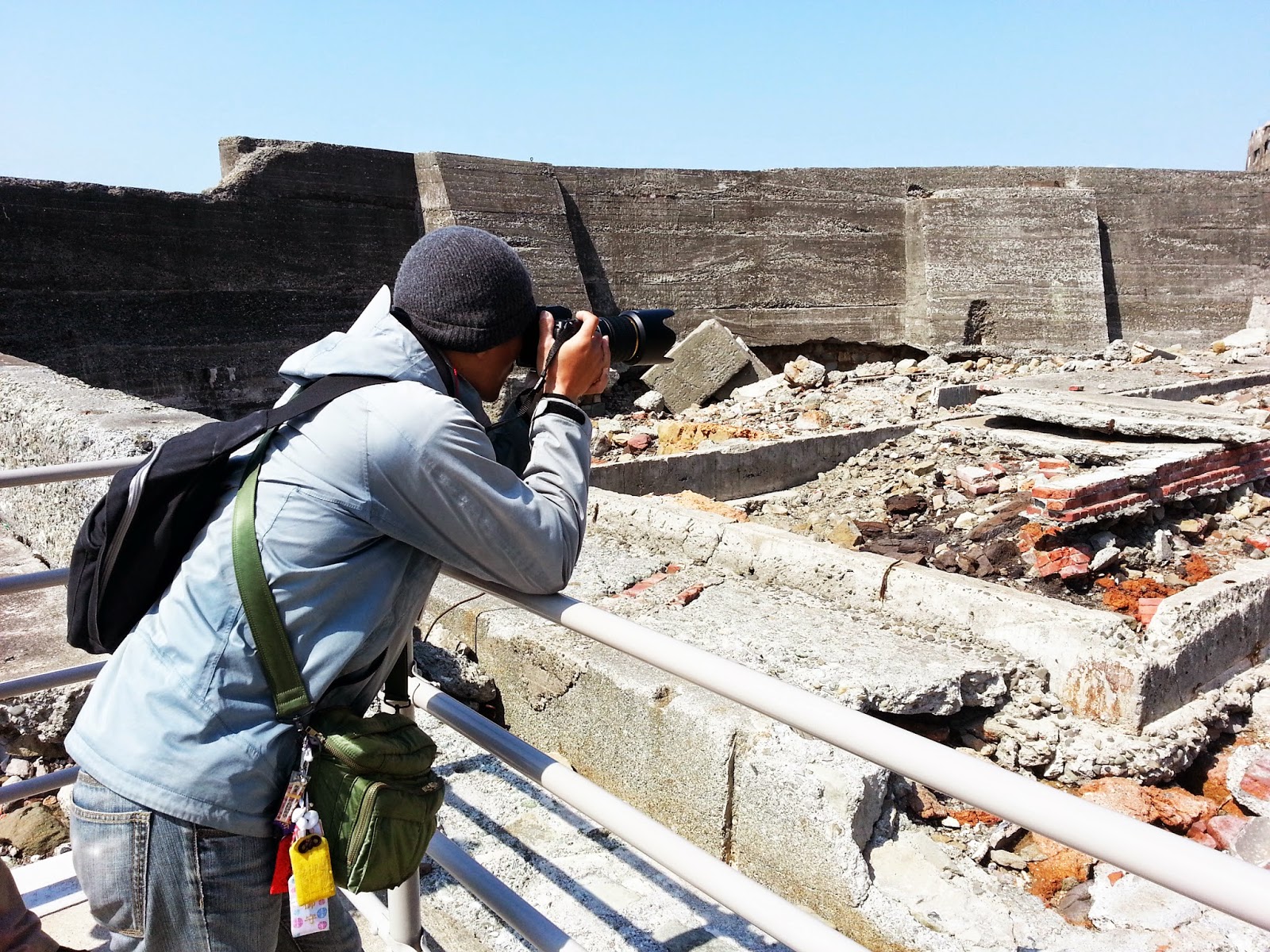 20, You can see the thick concrete walls that were built to protect the buildings. Nothing can ever beat the powers of natures lashing storms and disasters. The buildings and its floors still dropped down mysteriously. 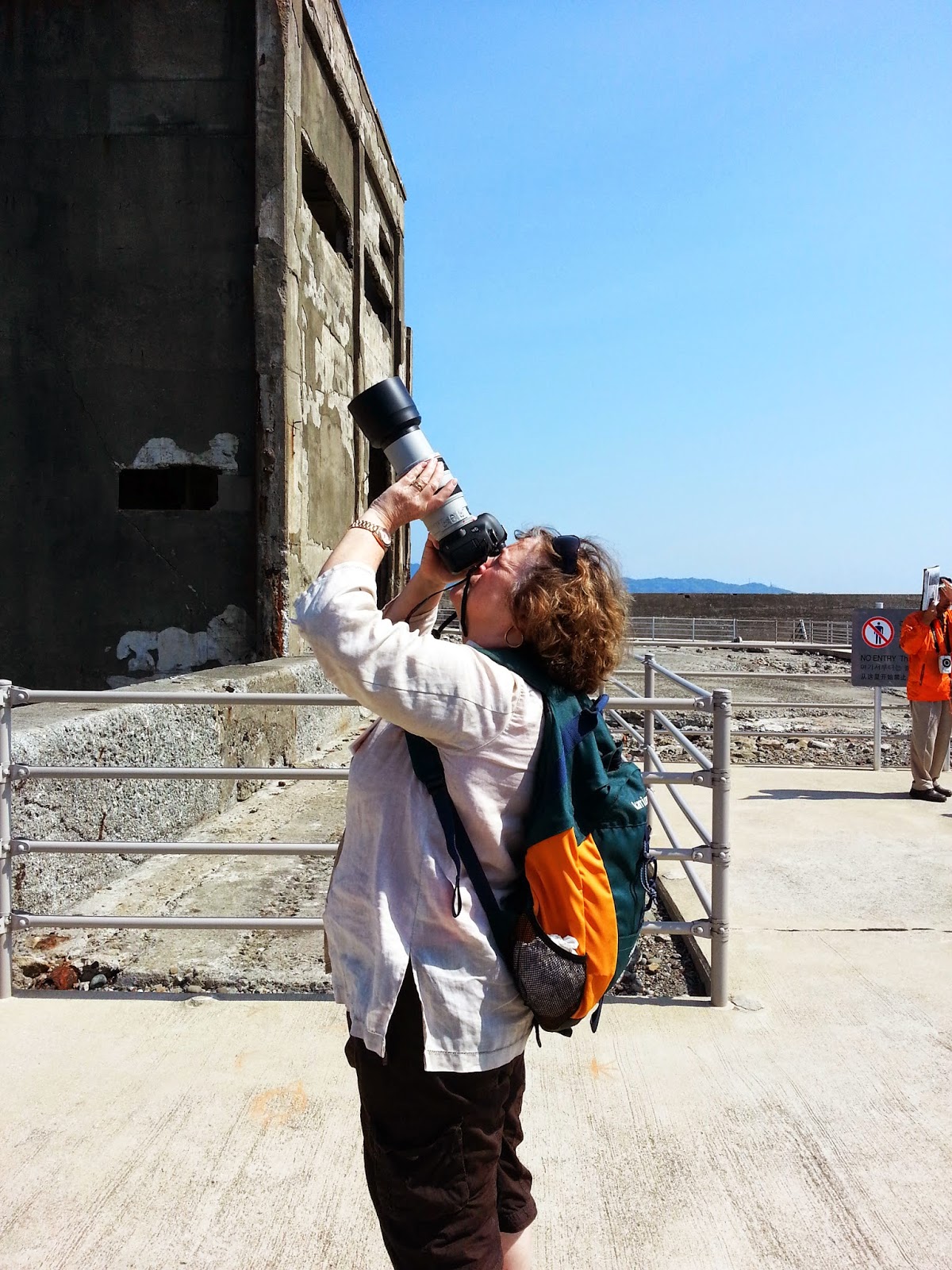 21. Now she claimed that Ultra Man flew past Hashima Island too! 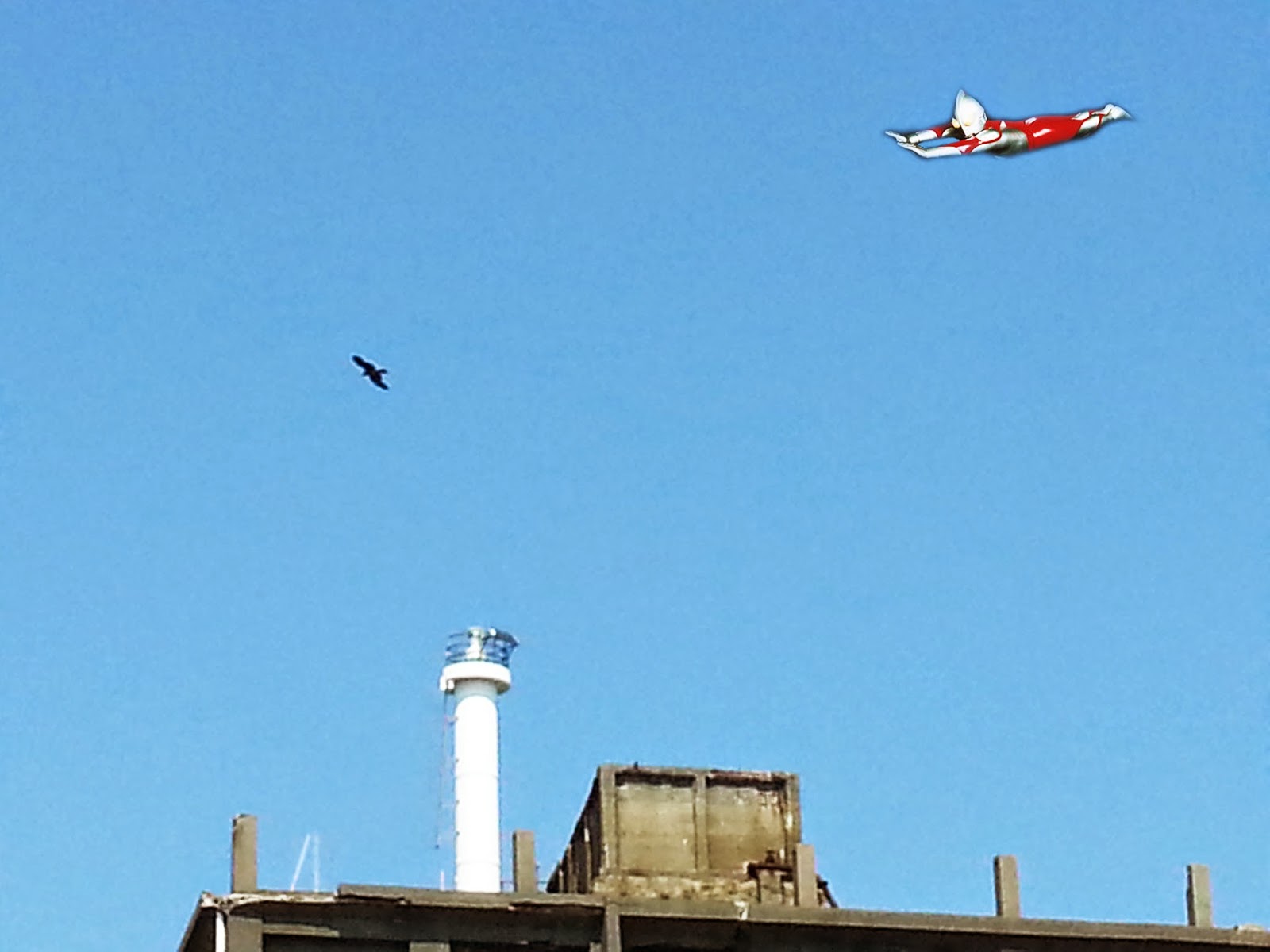 22. There is a new light house that sits atop to guide passing ships at night. 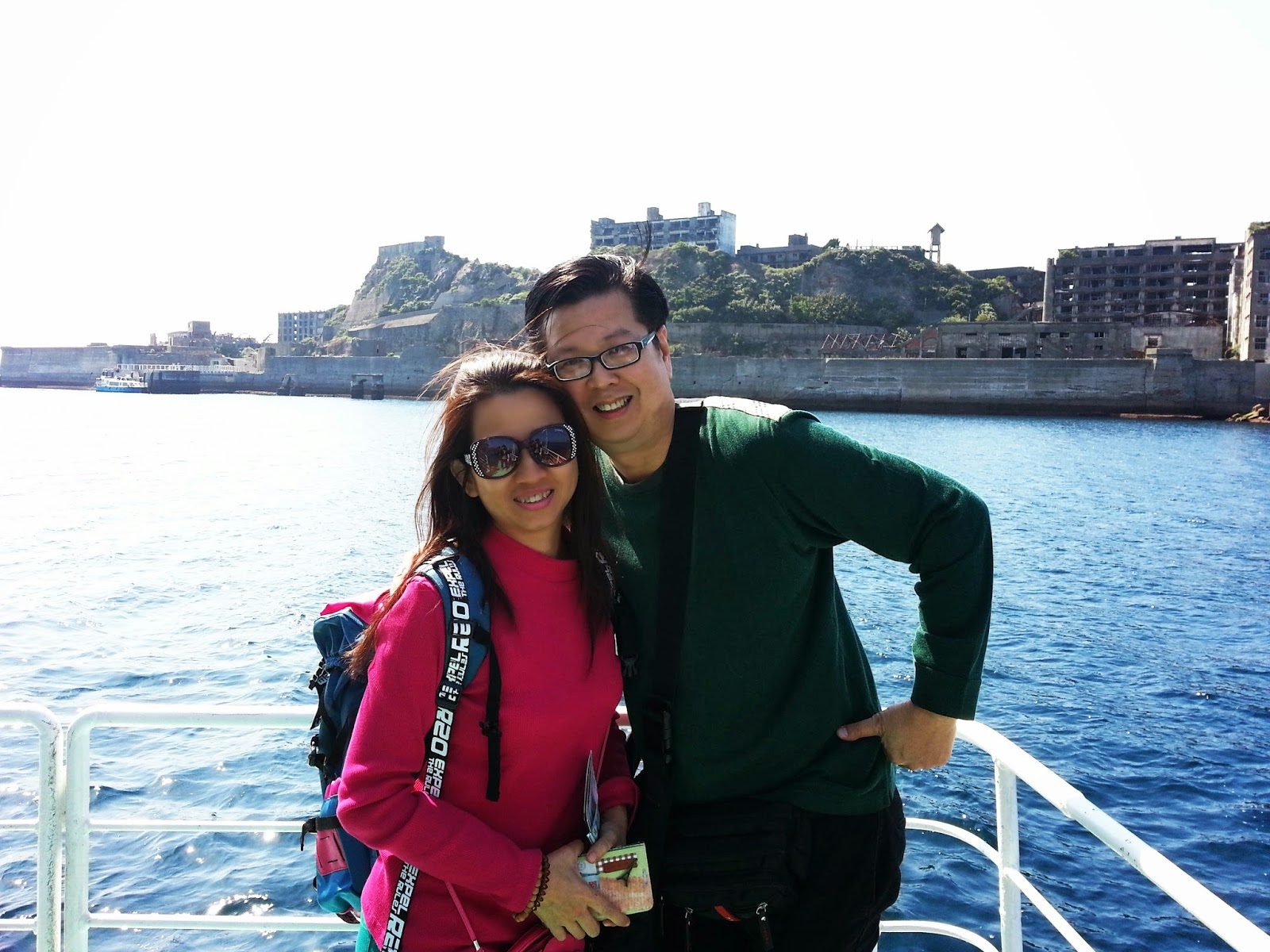 23. We had a really great time to explore all the cracks and history of Nagasaki. It's truly a wonderful country with the most polite and gentle people on earth that makes their country even more beautiful. 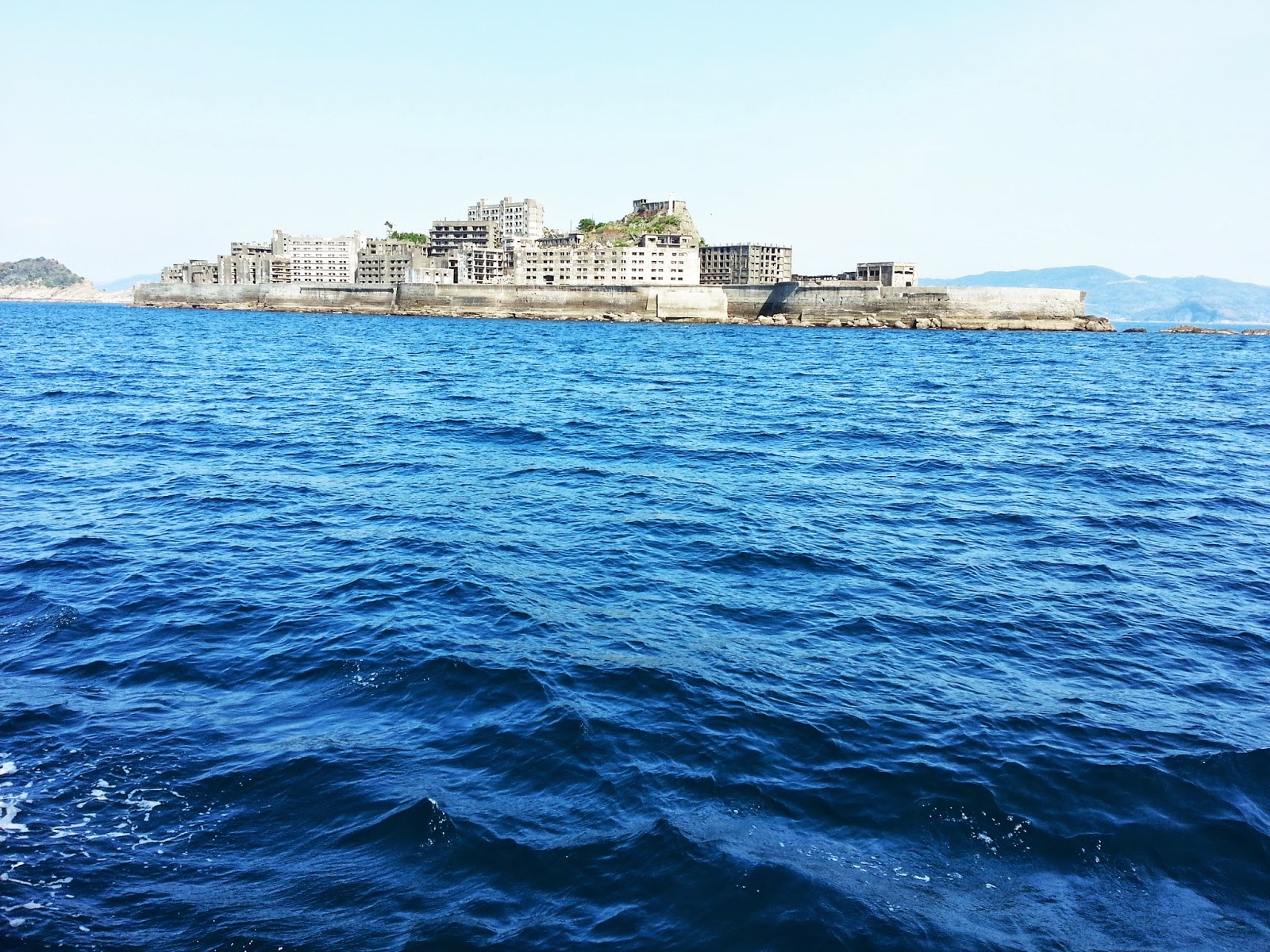 I am in the midst of preparing to blog the following:

on April 09, 2014
Email ThisBlogThis!Share to TwitterShare to FacebookShare to Pinterest