I have heard about this famous Chinese Cemetery in Philippines which is the most unusual in the world. I read them in media tabloids and watched TV documentaries which showed how the whole place looked like. My wife's associate also suggested that we should visit this unique Chinese Cemetery and the slums of Smokey Mountains.

The history wrote that the previous Spanish ruling government refused to allow the Chinese immigrants to be buried in the same grounds of the Christian Cemetery. So this Chinese Cemetery was built instead but I have no idea how they built big individual mausoleums with grave tombs instead. This has been known for the wealthy families only.

We hailed a taxi to get there and the driver had no idea about its exact location as it is quite far from Makati. The driver had to stop and ask the people several times before driving into the narrow lane.
The sudden change of street scenes outside Makati made me nervous!

This place is not exactly opened to the public as it is fully well guarded at the entrance. The guards saw us in the taxi and let us inside, probably thinking that I was a filial grandson. Other foreign tourists who arrived later were subject to long questioning by the guards who were just doing their jobs. We were the only 2 visitors inside the whole cemetery for the first hour. 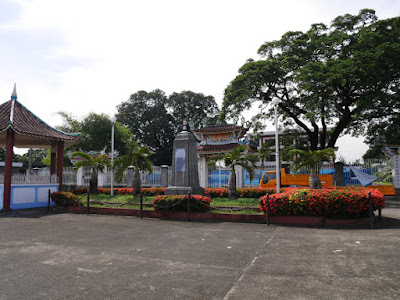 1. We got down from the taxi and walked up the slope
to the cemetery area on the hilly land.
I had a lump in my throat and the sun was shining very hot
but I felt chilly with dripping cold sweats. 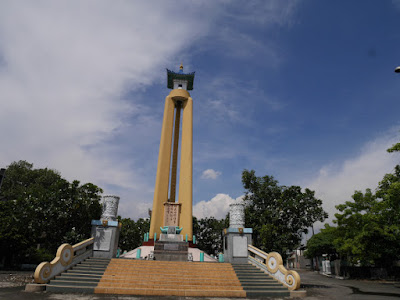 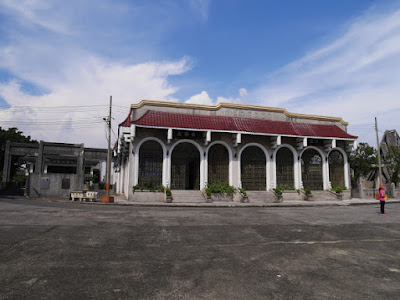 3. This building is for the wake and ceremonial last rites. 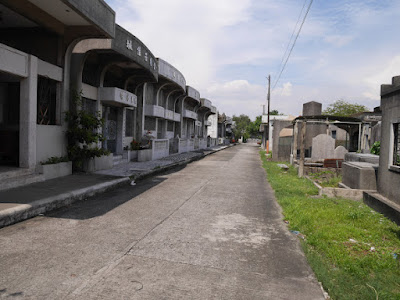 4. I snapped over a hundred photos of the mausoleums
but you would see just a few random ones.
As a respect, I peeped into many Tomb Houses but did not snap the photos inside.
Honestly, I was scared stiff like a frozen fish walking on egg shells. 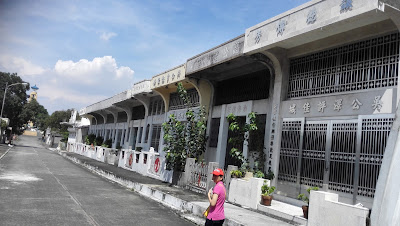 5. My brave wife who has the steel heart of a Tigress always walked ahead of me!
There are many rows of quiet lanes where the thousand tombs all stood individually like
terrace houses. Inside each unit has concrete tombs inside with huge photos on the walls.
Most of them were elaborately furnished with tables, chairs and even kitchen with resting rooms for the visiting families. I heard that many had mahjong tables for the descendants to play. 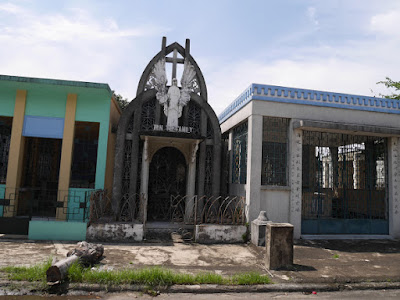 6. My heart was beating fast with cold sweats and mouth mumbling all the mantras
until my tongue got twisted. I could still snap many random photos just to share
with you guys. I bet most of you may not want to visit this place but it is an eye opener.
It was like walking into a housing area and every house had a funeral
taking place with the concrete tombs and big photographs
facing the door. 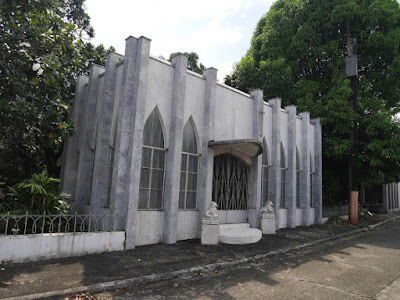 7. All the tombs had their own elaborate designs using the best finishing of marble, tiles and sand stones complete with grill doors, gates, fencing and gardens for some bigger lots. 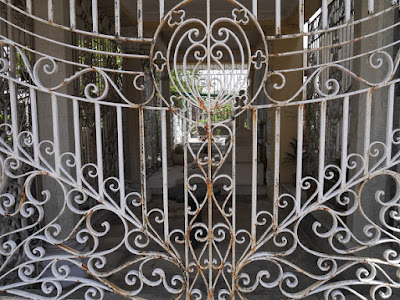 8. This is the only interior of the mausoleum I took
as it had side windows and the tombs faced another direction.
All the mausoleums have the visible concrete tombs
above the ground. 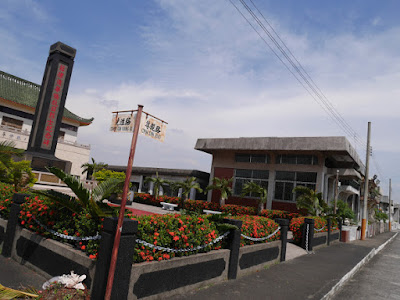 9. Some units were 2 storey and looked very modern like KL's bungalow
homes with glass balconies! I saw that in someone's website and could not
locate it as the cemetery grounds are so huge and seemed endless.
My chicken heart didn't want to venture too far while the sun was still hot. 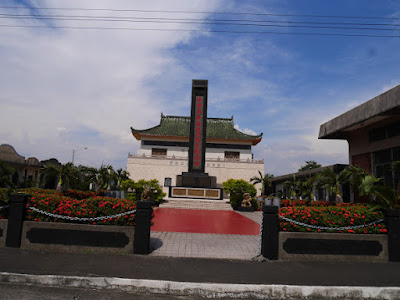 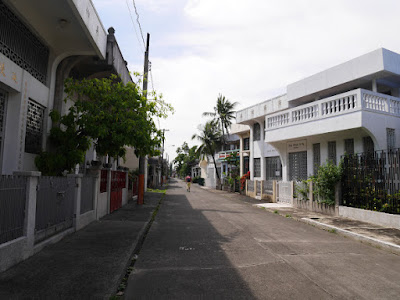 11. That's me walking ahead of my wife now.
The main roads are wider and bigger grave houses are built there.
I was shocked to see several mausoleums had people walking
and sleeping inside. They are the caretakers and alive.
Then, the dogs started barking everywhere.
They even had guard dogs leashed to the doors! 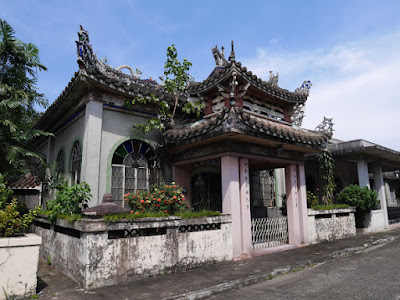 12. This mausoleum was built in accordance
to the ancient Chinese architecture. 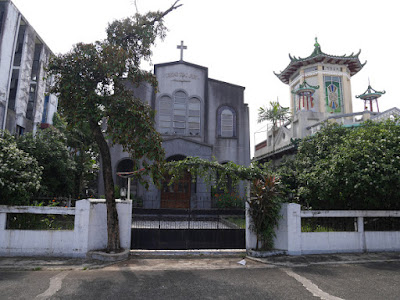 13. This mausoleum is very big and looked like a church
but it is a grave site of a family inside. 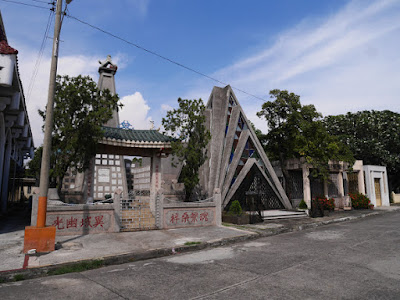 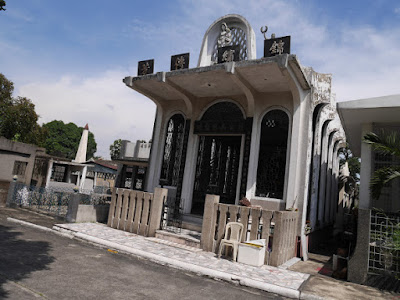 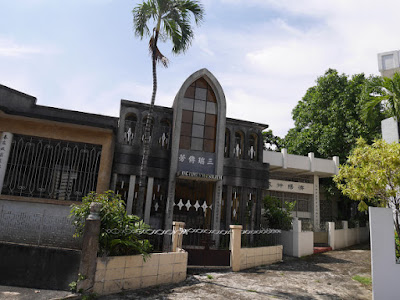 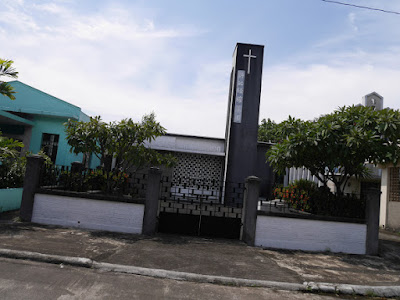 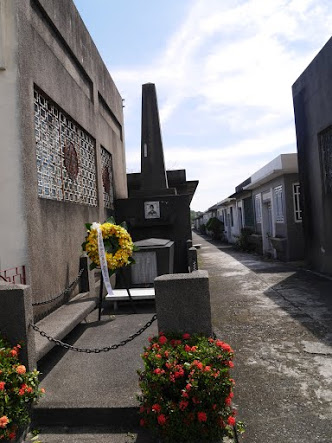 14. This is a Hero's Grave and the President of Philippines
sent a fresh floral wreath as respect. The tomb has a plaque that
explained his great contributions to the country.
At the side narrow lane would lead you to many more hundreds of grave
sites which I did not enter as the space is always too narrow. 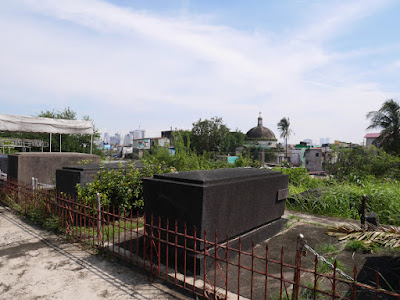 15. Far behind these open space, lined many slum houses along the fence.
That was the end of my visit. 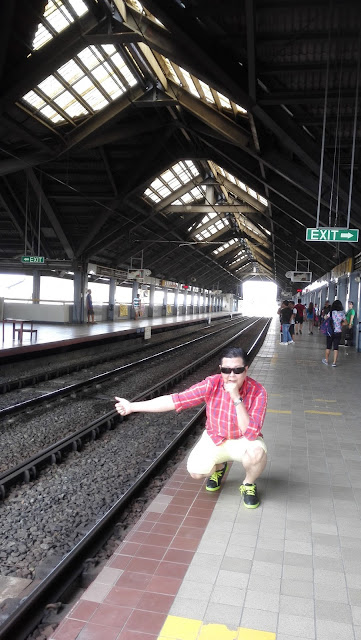 16. We decided to try catching their LRT trains back
to Makati as the station was just outside. I was relieved
and looked pale like white sheets. 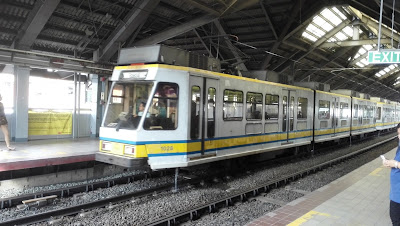 17. After one hour of long wait, we gave up as no trains stopped to pick us up.
It was sardine packed and sometimes out of service. Even the station master has no idea
about its disrupting services!


on September 04, 2015
Email ThisBlogThis!Share to TwitterShare to FacebookShare to Pinterest