It was the most unforgettable experience in my whole life to climb the Mount Hua (Huashan) in Xian. It is the scariest of the 5 Sacred Mountains in the whole of China for its steepest altitudes. The scenery was awesome and breathtaking as we climbed higher and got closer to heavens!

These mountains have several peaks at the North, South, East and West directions with the highest at 7,070 feet!!!!!! (2155 meters) Yes, we reached the top and screamed our jubilant lungs out! 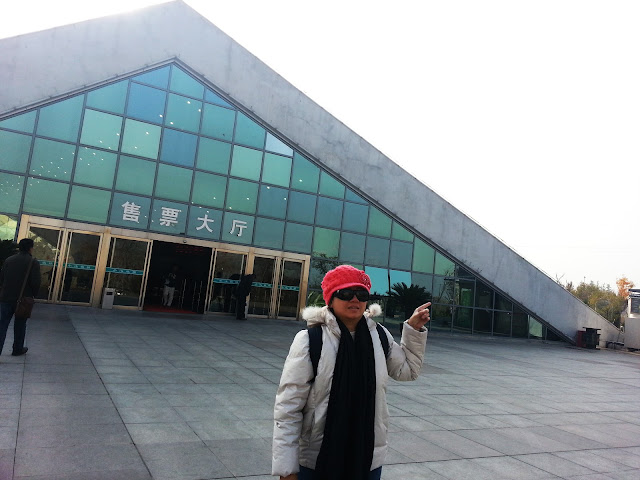 Our tour guide and driver picked us up from the Citadines Hotel at 8:00am and drove some 120 kilometers to a town near Huayin at the East of Xian. Here, we took the special bus that traveled on the most bumpy roads to the Cable Car Station. If I was pregnant, I could have gotten instant miscarriage on the bus! The Cable Car Station was at the bottom of the white rocky mountains. We were lucky as the sky was clear and it just snowed the day before otherwise they will not allow us to visit. It is subject to daily weather conditions during Winter in Xian. 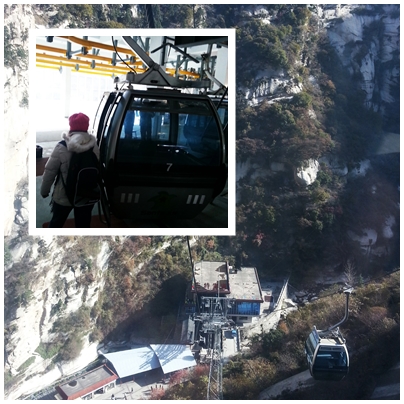 We jumped into the moving cable car and it brought us up very high to the peak of a smaller mountain. 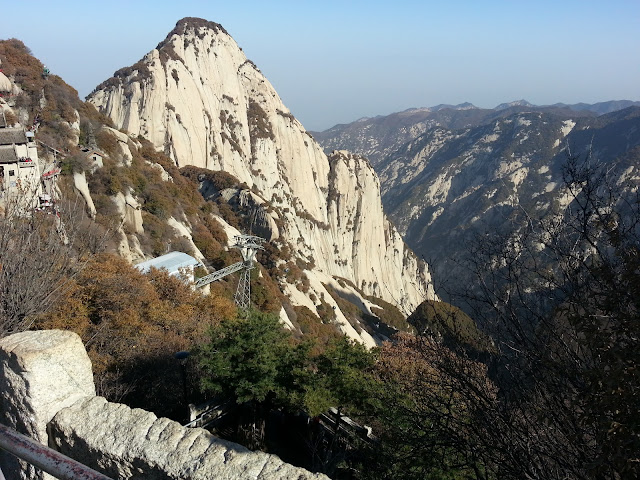 The view was lovely at every direction. I would pause and admire them like priceless paintings! We could only admire such panoramic scenery in China. 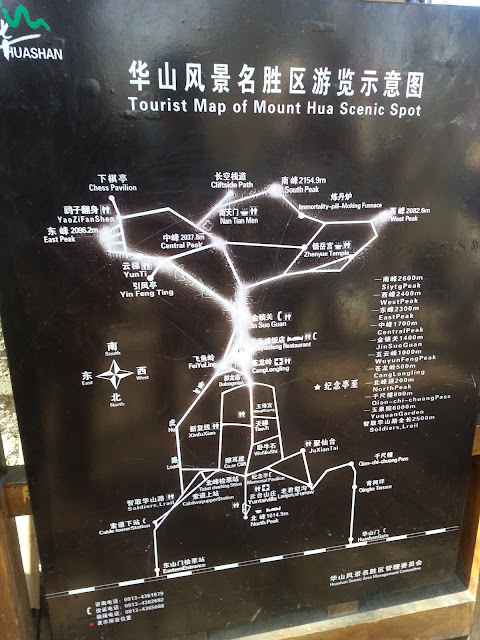 Here is the map showing the various peaks of all directions. Most of the hikers would try to climb all of them. It was very tough to cross-climb from peak to peak.Crazy! 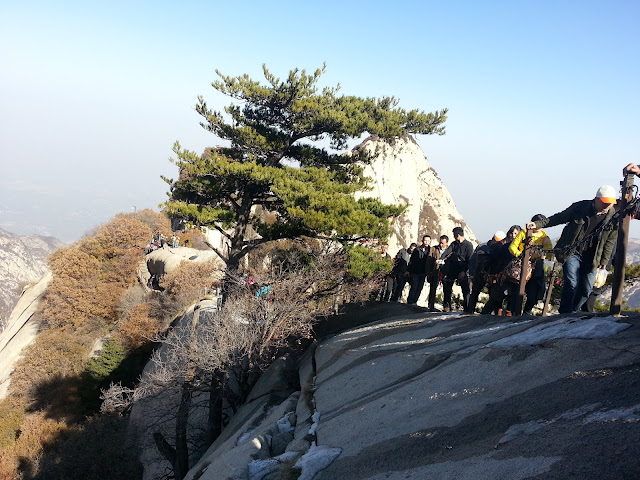 The steps were short and narrow which were extremely dangerous as it was a 2-Way traffic for hikers! As we all know, many folks are selfish and rudest beings who loved to shove & push others! 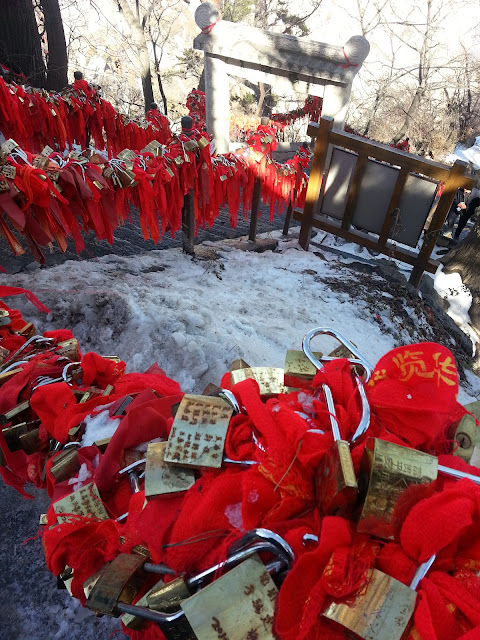 Many couples and love birds bought padlocks and clamped them everywhere! You could see hundreds of thousands of padlocks with messages. They would throw their keys into the wildness after tying them with red cloths. Do you think it works? 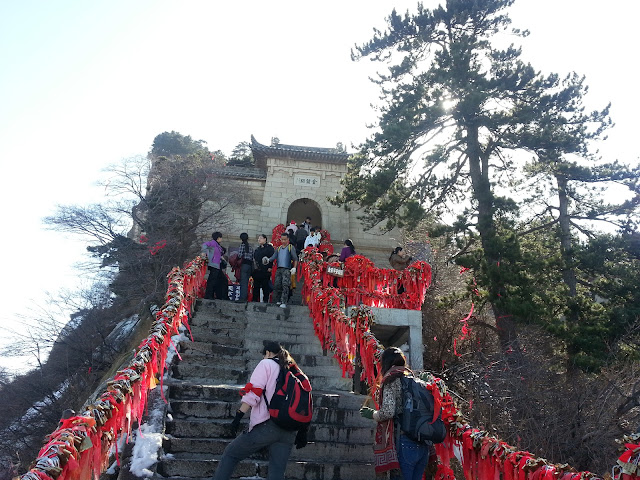 I think the padlocks would add more pressure to the relationships! It is like tying yourself down. I would prefer to allow my honey to breathe and live freely & happily! I believe that Good Marriages are sometimes arranged by the Heavens. 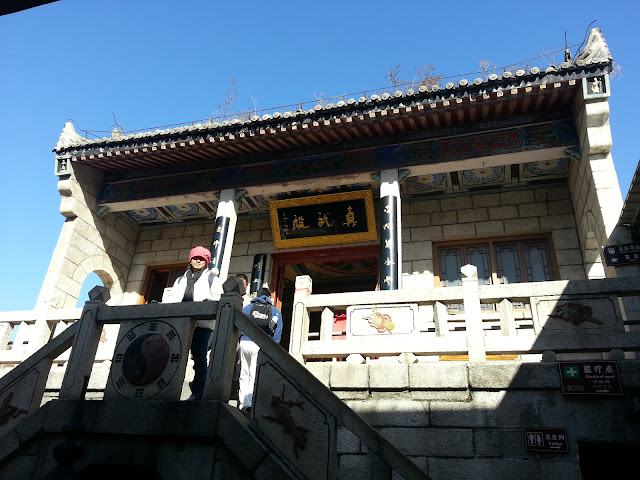 Along the route up, there are many small shrines of different Taosim deities. I offered my respects to all and put in small donations to bless us to have a safe journey up the Mount Hua. 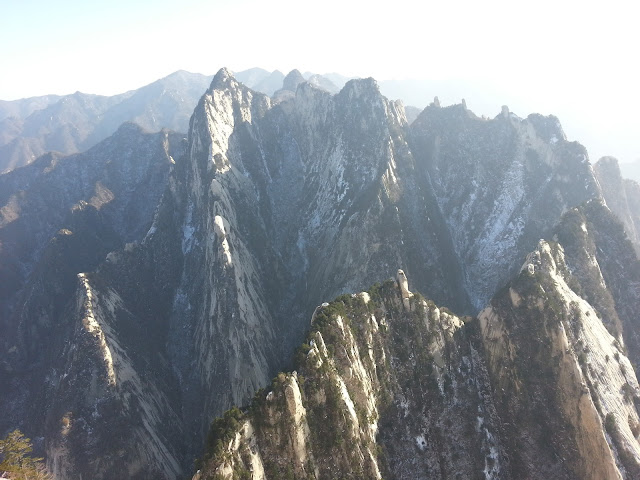 As we climbed along for many hours, the beautiful scenery was simply breathtaking and heavenly. I was hoping to see some fairies flying above. 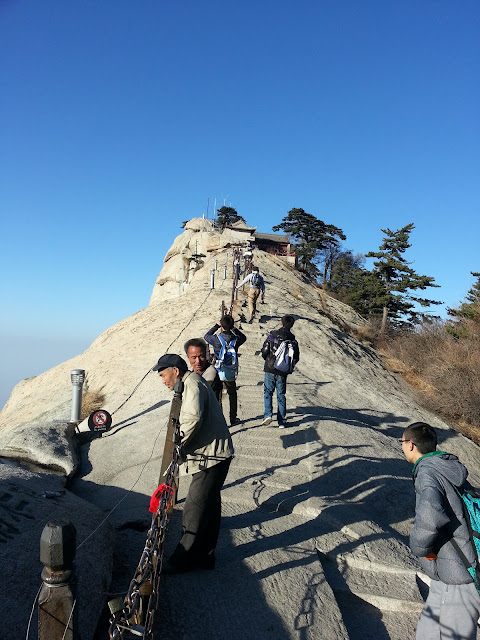 Most treks were very tough and not for the weak ones. You have to pull yourself upwards by tugging at their rusty chains. Many people slipped and sprained their ankles. We bought new shoes just for this trip to climb. 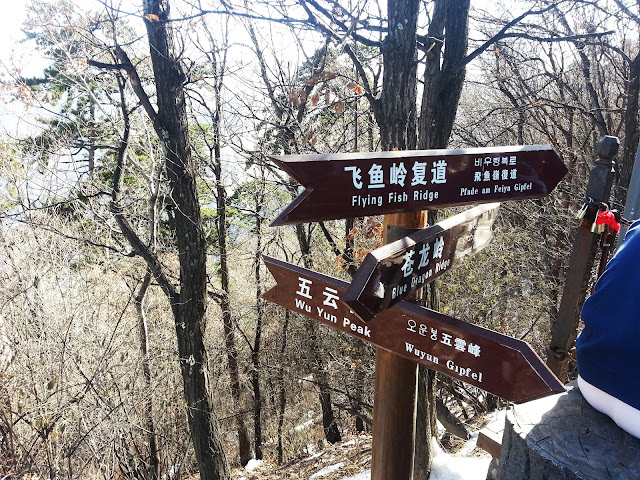 As we got higher, it was getting colder at Minus 5 degrees with snow everywhere. The snow melted in many areas and formed ice!!! IT WAS SO DANGEROUS! 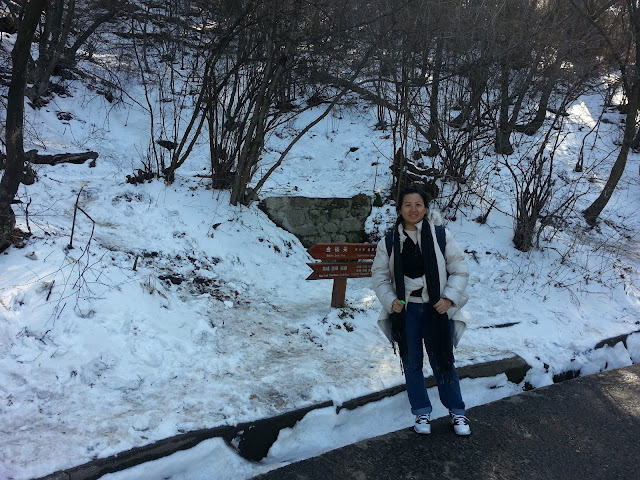 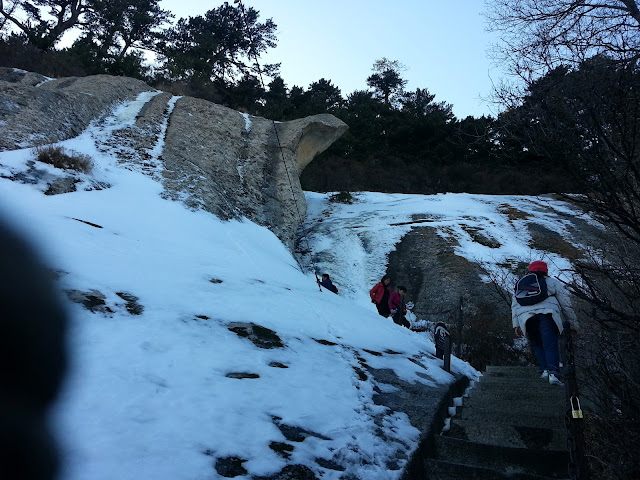 I was grumbling non stop and my wife just ignored me & went up ahead so proudly and happily like a small girl. She told the tour guide to watch over me. I nagged at him like a grandma all the way up as he always lied to me that the peak was just around the corner! All bullshits! 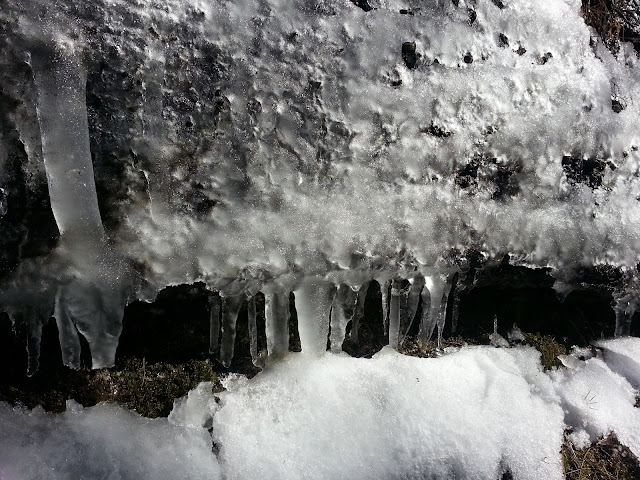 See what I mean??? There was ice everywhere and it was SO SLIPPERY! Many people fell flat and hurt their backs. It was so scary and my balls nearly dropped down many times. 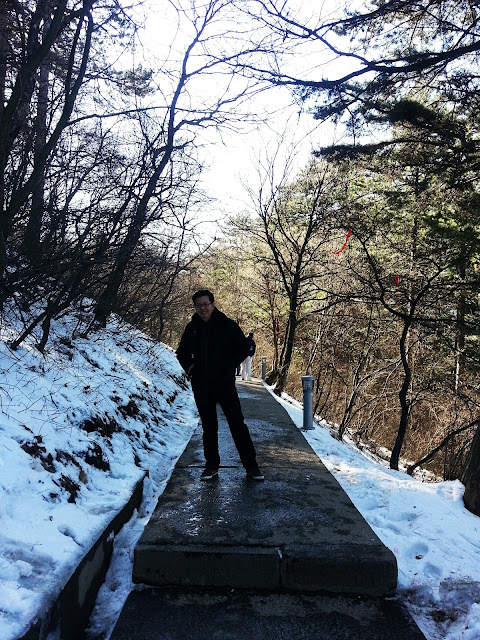 I could still smile and posed like "No Sweat". 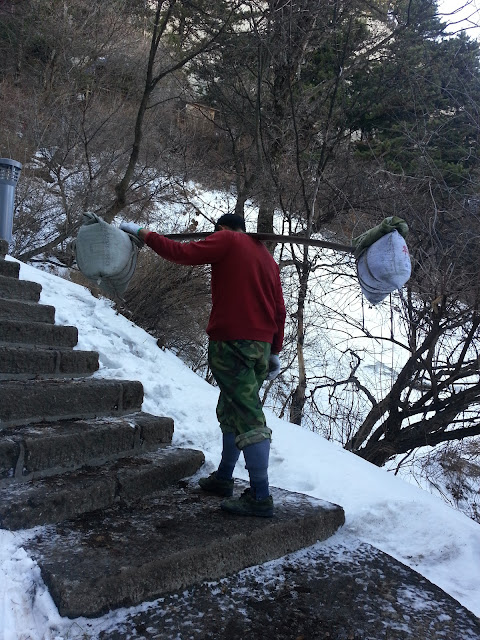 I stopped grumbling when I saw so many tough old men who had to earn a miserable living. They had to carry heavy loads like bricks, gas cylinders and provisions up every day. They were paid very little like MYR20 per trip! MY GOODNESS! 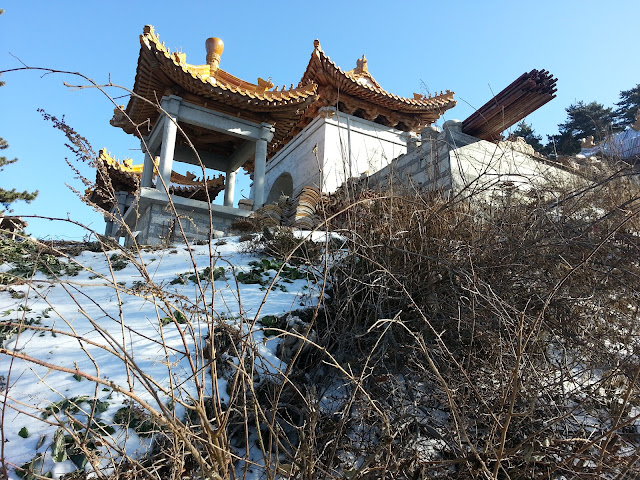 They are building a nice shrine at another peak. The workers had to shoulder carry up every single brick, tiles and cement bags!!!! I have stopped complaining about my life now. 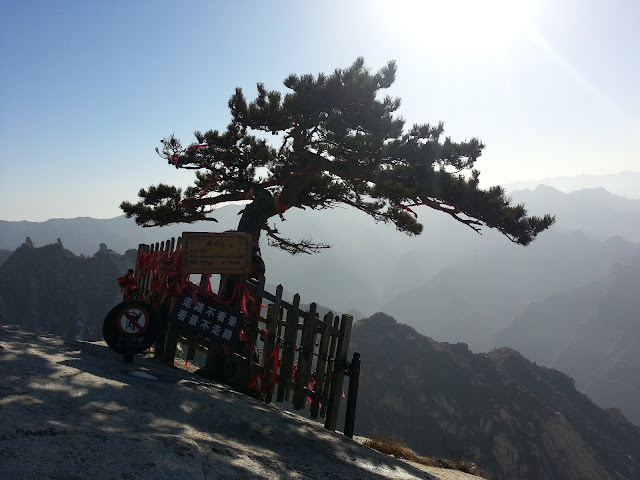 As we almost reached the top, the scenery became so calm and peaceful to see the mountains faraway. Many pine trees stood alone for centuries braving the 4 seasons all year long. This beautiful tree is 300 years old. Many other trees were well over 600 years old! 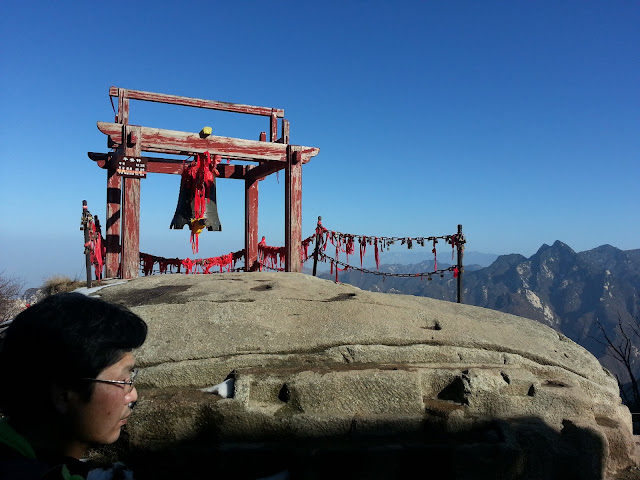 There was an old bell that stood at the edge of the rocky cliff. Many people stood there dangerously to pose for photographs. 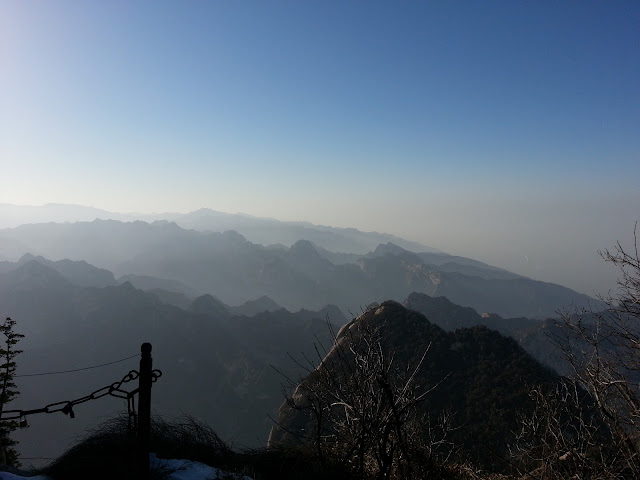 It was almost evening and the heavy mists enveloped the mountains faraway like a Chinese Brush Painting! 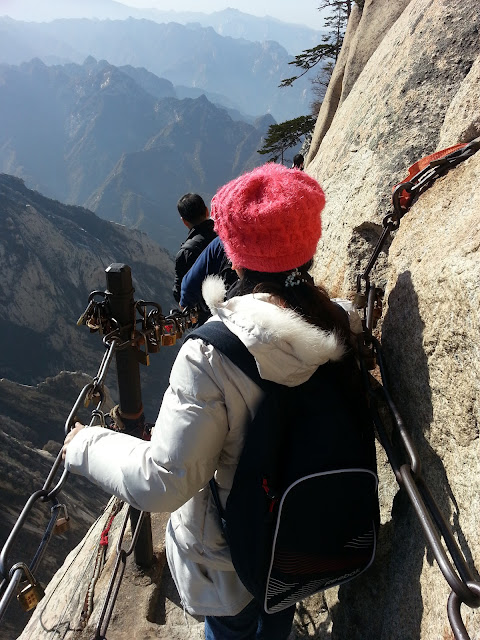 Look at the dangerous paths that only the brave hearts could endure for hours! One wrong move and you could fall below & DIE!!!! 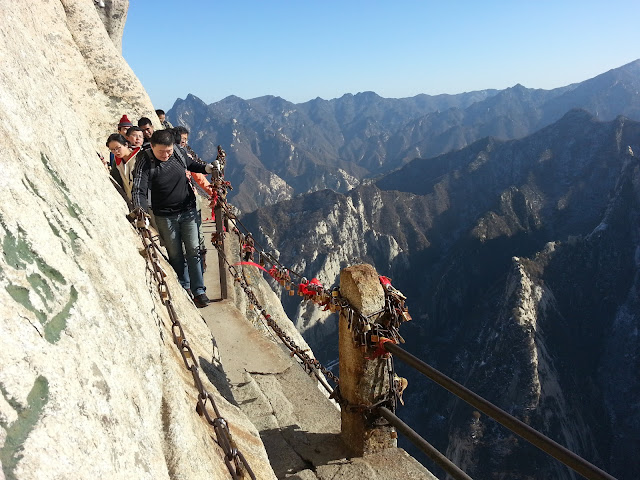 I looked behind at the crowd who were SO SCARED!!!! It was so cold and windy to walk on the rugged tracks. We had to hold dearly for our lives to allow others to pass from opposite directions! If you slipped off, you would fall thousands of feet below & DIE!!!!!!!! 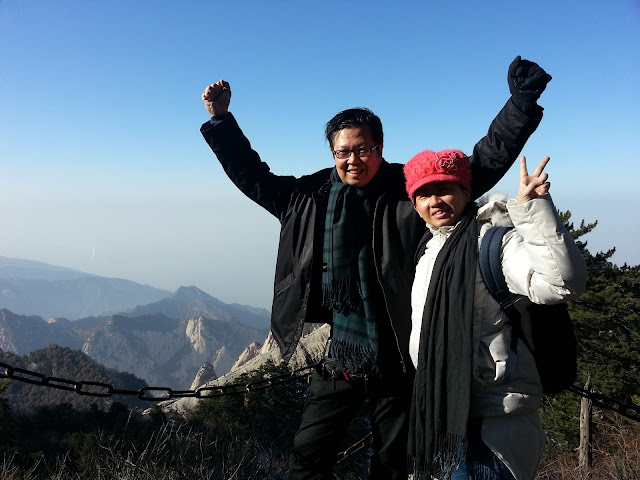 YAY! We managed to reach the TOP OF THE WORLD in China. The feeling was fantastic and I am always proud that my wife has always pushed me all the way! Oh man, I sound so sissy! LOL. 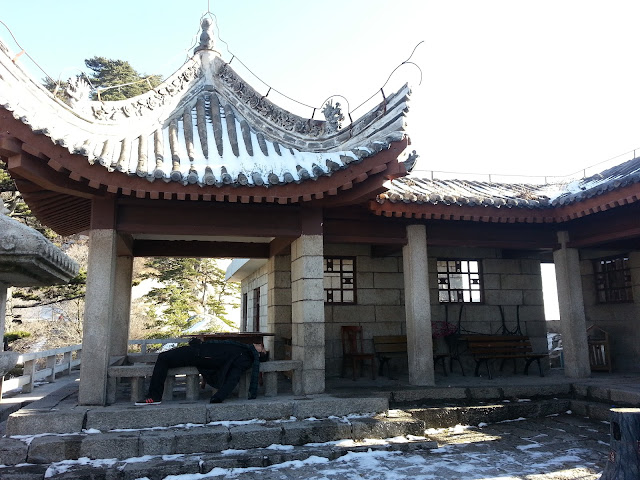 It was time to climb down. My spirit went limp and my limbs went numb! Anay collapsed on the granite bench! I was dying to soak inside the hot spa that night to nurse my 100% body aches after reaching 7000 feet. Why did Bosco soak himself when he had no aches? 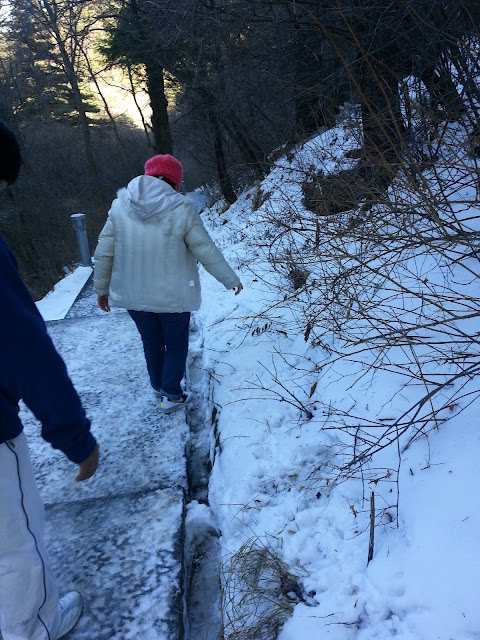 Look at the very slippery ice paths all the way down the slopes. It was getting colder and colder towards late evening as the melted snow started to frost again! Many people hurriedly walked down to catch the last cable cars. THEY FELL FLAT like pancakes! Ouch! 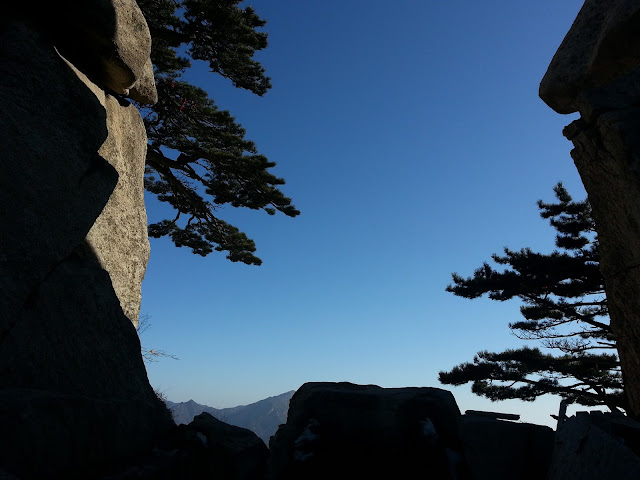 I walked slowly down like a happy grandma to admire the sunset scenery! Awww! I love this photo!

I was surprised that China still has very filthy & dirty toilets up in the mountains. They could not build the flushing systems up there so you could just poo into the hole. OMYGAWD! There were so many chunks of fresh brownies everywhere! Look at the photo below. See the light in between his legs??? Your poo will just roll out to nowhere!!!! They placed plastic buckets in the middle of the toilets and all the men just had to pee openly into the buckets! They would smoke happily and held their willy to pee while chit chatting and faced each other!!! Goodness - AMAZING CHINA MEN! 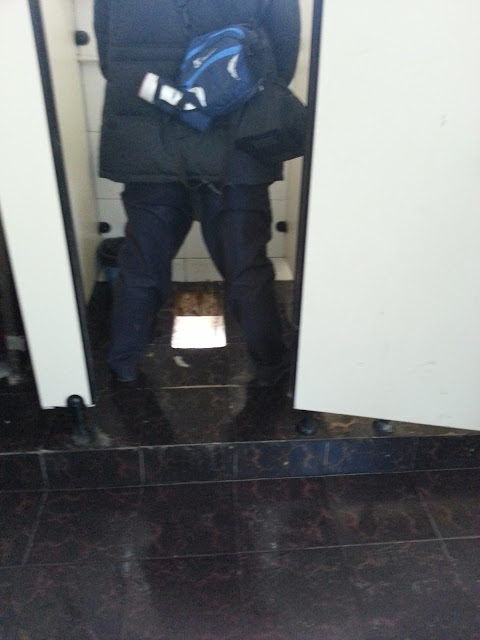 on December 03, 2012
Email ThisBlogThis!Share to TwitterShare to FacebookShare to Pinterest