I am sure many have heard so much about the Cow Minister's issues sometime ago. You must be very curious how that ultra luxurious condominium looked like. I am fortunate to have a very close friend who is blessed with mega good merits to own 2 units in this KL's Creme De La Creme's Hub of Bangsar. 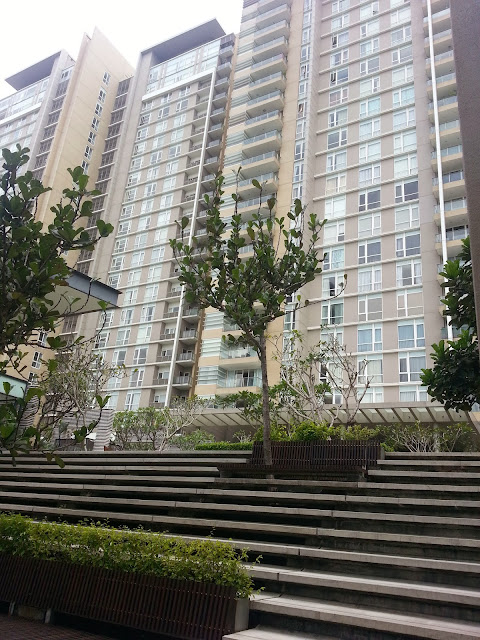 Every floor has only 1 unit with a space of over 4,000 square feet where the market is now commanding @ RM1,900 psf. It was built to finest perfection for the discerning few 'Who & Who's' in Kuala Lumpur's high societies. Do the maths and you might faint at the price tag. 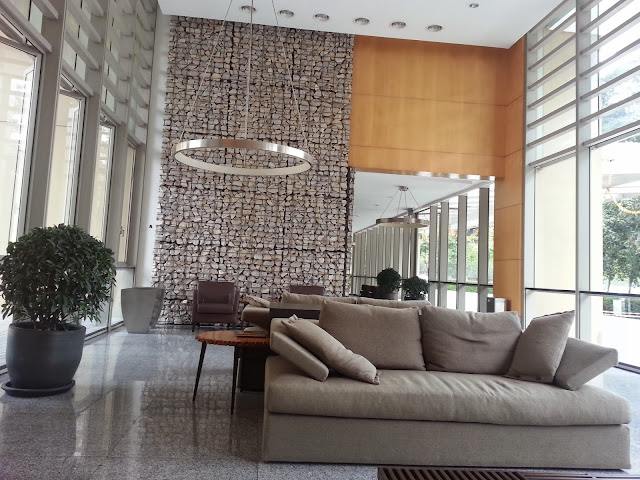 The Granite Walled waiting lobby is very huge with super comfy sofas for me to play Candy Crush or take naps. 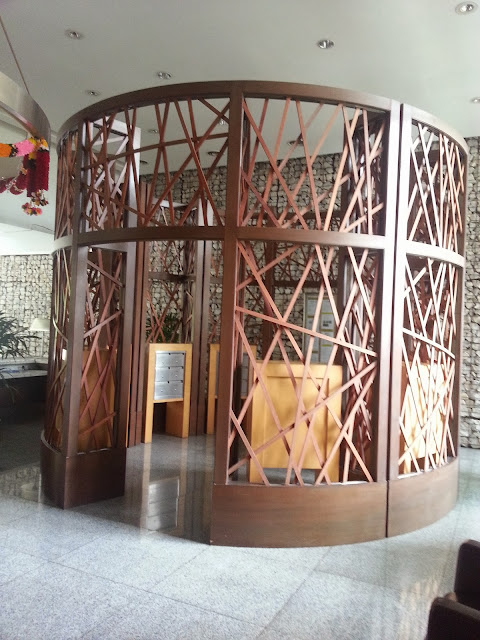 Even the Mail-Room comes with modern architecture designs. 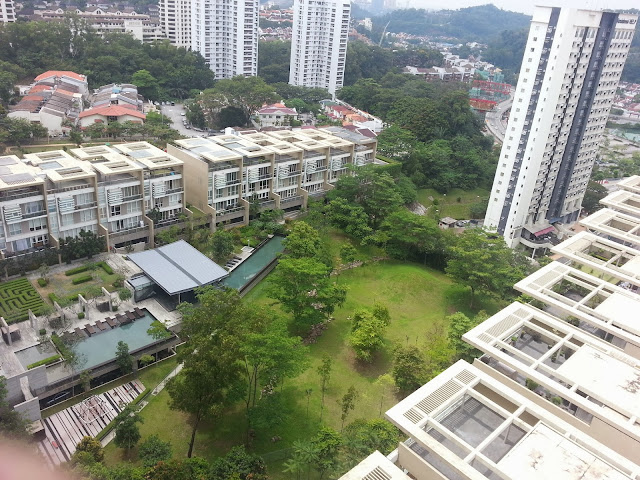 You will see the panoramic view of the whole hills of Bangsar's wealthiest homes and condominiums. 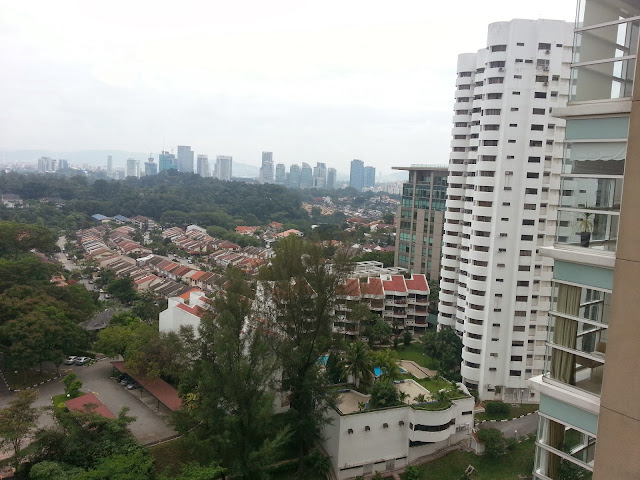 This is the other side of Bangsar towards KL and Jalan Maarof. 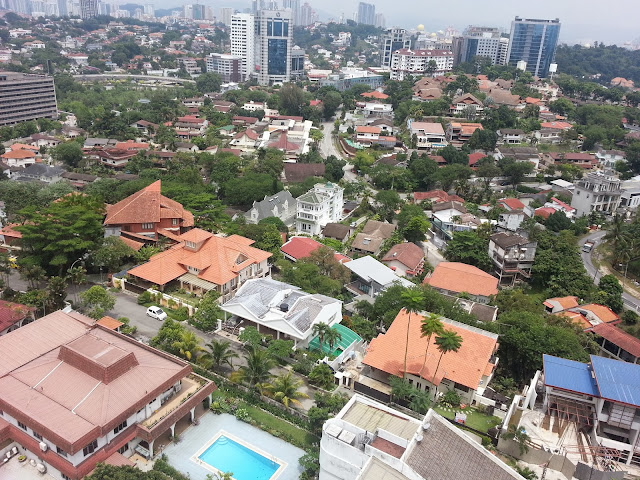 All the luxurious bungalows sprawling around Damansara Heights. 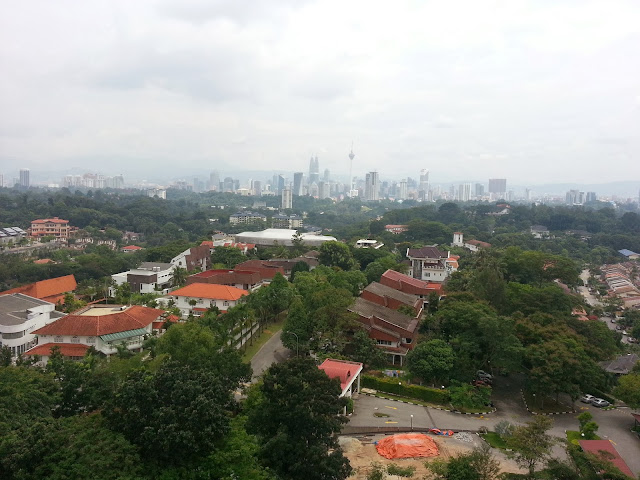 KL View on a hazy day. 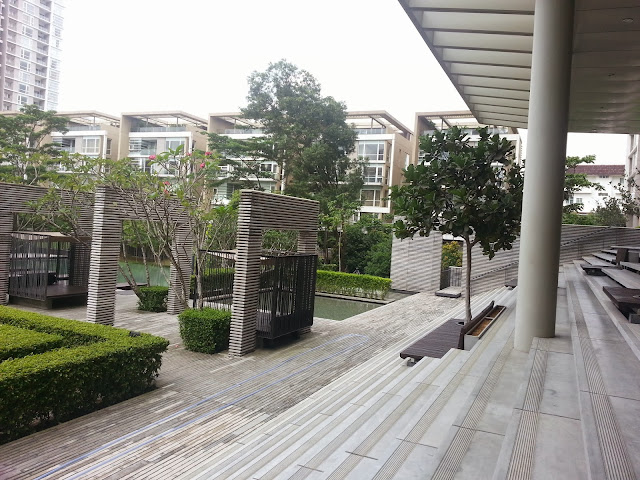 The terrace leading down to the pools and gymnasium that overlooks the lap pool. 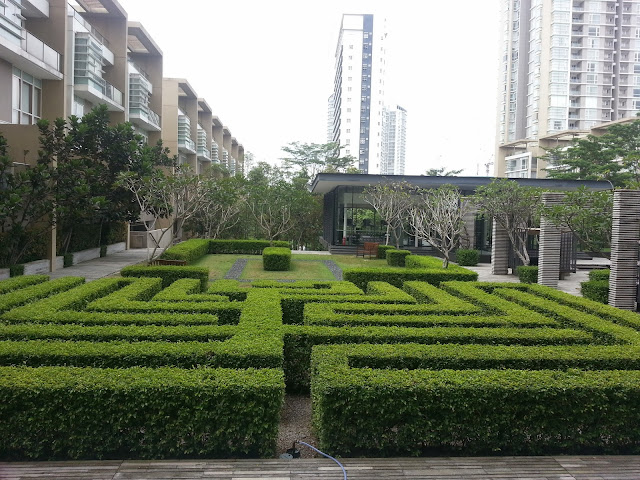 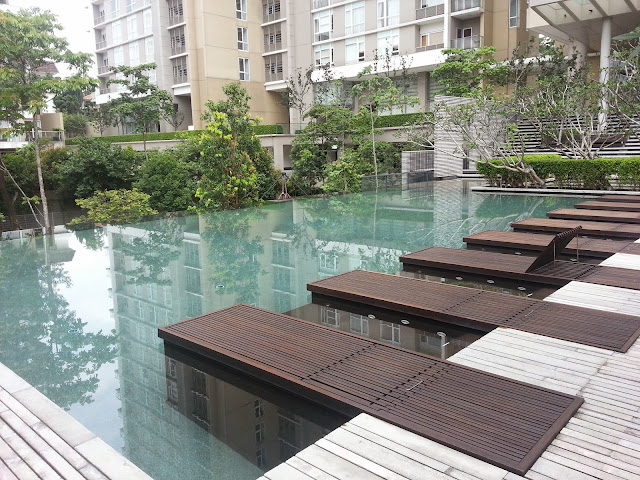 I can soak in this pool all day or relax with a book. 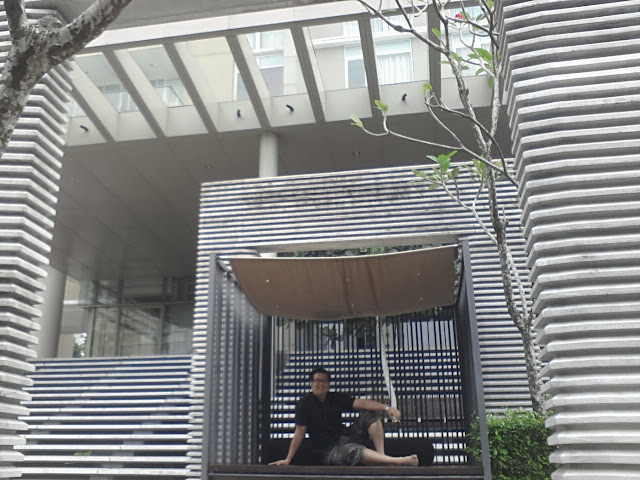 They have several neat Alfresco Cubicles that comes with bolsters
that befits even the Maharajah of Jaipur. 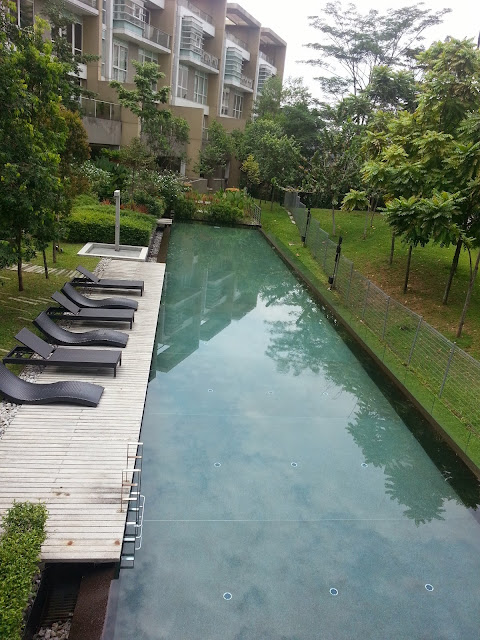 You can swim in this long lap pool too. 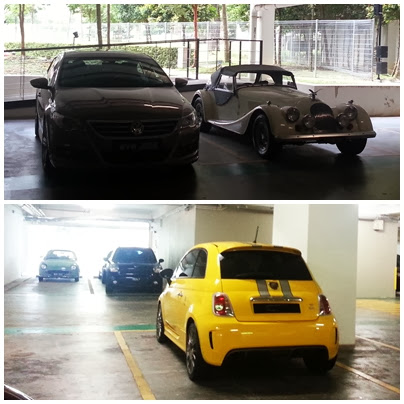 The basement parking area looks like a Luxury Car Showroom to me. I lost count on the number of Italian Sport Cars, Porches, Bentleys & even Maseratis. The first person who could guess the name of this small yellow car will get a small gift from me! 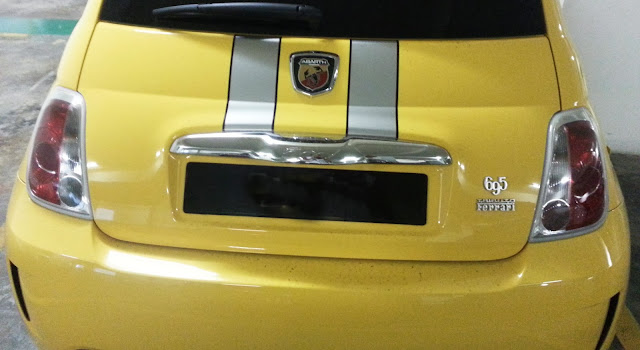 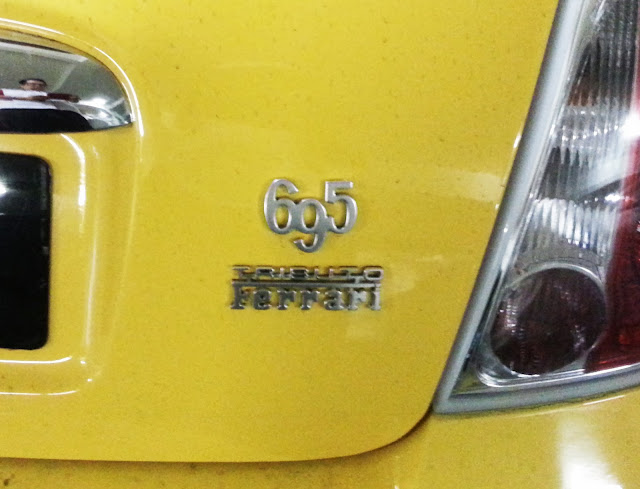 on October 28, 2013 136 comments:
Email ThisBlogThis!Share to TwitterShare to FacebookShare to Pinterest

My late father-in-law breathed his last on 8th October 2013 after suffering from leukemia and some other complications for several years. He has been in and out of hospitals for the last 4 years including seeking herbal treatments in China. He was just 64 years old and sadly, that's a bit too young to go. I will miss his wits and humours.

He had requested to be accorded with the rites of the old fashioned Chinese Taosim funeral after he had passed on. It was a real eye opener for me to observe this whole ritual ceremony that spread over 3 days in this dainty town of Kampar, in Perak. I have previously attended many modern and smaller scaled Taoism rite funerals but this recent one was being carried out with almost to the fullest scale that sent my eyes big.

My photos are very limited as no one in this superstitious clan would ever dream of taking photos, let alone to even blog it like me. So I photographed them without anyone's knowledge. 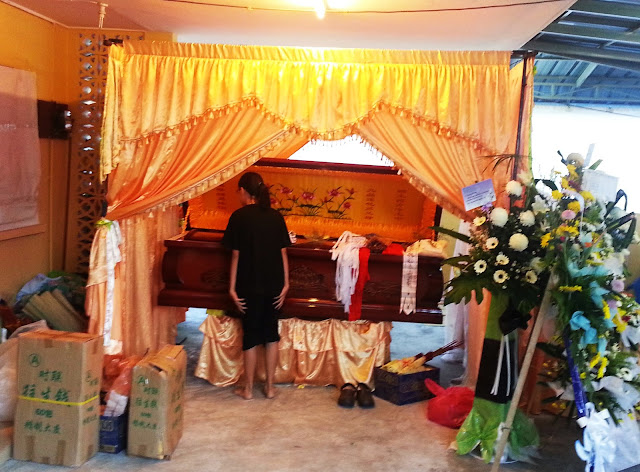 1. If the deceased had passed away outside the home ie. hospital, the coffin would normally be placed outside their home's compund or at funeral parlours. 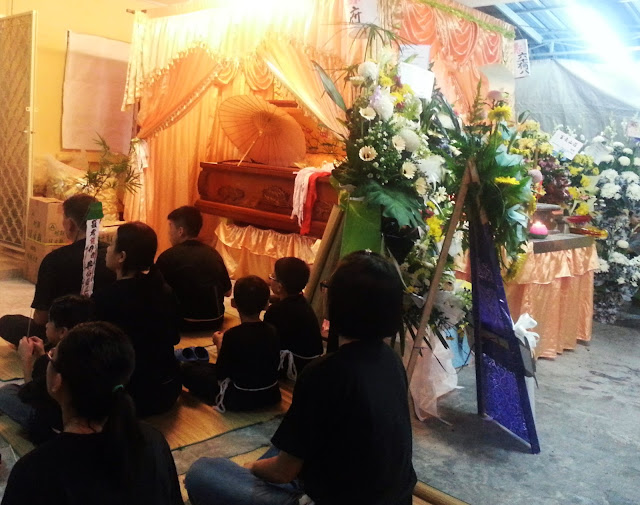 2. We hired several Taoist Monks (Namo Lou) to conduct various ceremonies and chantings in Cantonese dialect. The many ceremonies covered different criteria including the deceased crossing the death bridge, sickness clearance, blessings and many more which required the family members to kneel, bow and walk in circles for many hours each day amidst the clashing of Chinese cymbals, drums and beating gongs very loudly. 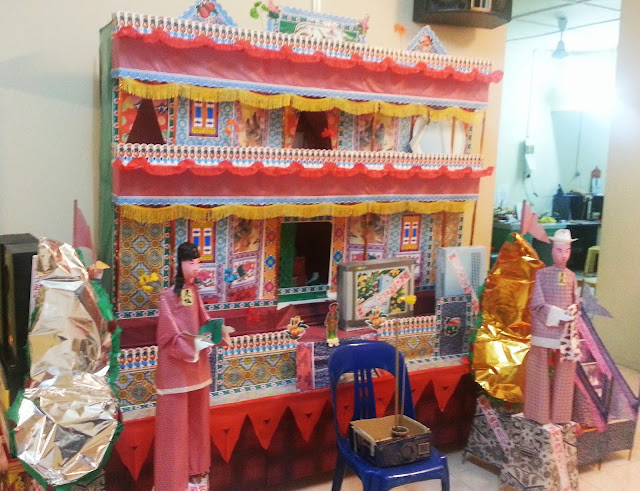 3. The family even bought him a huge paper mansion complete with maids, Assstro and a sports car. Do you believe that these costly paper offerings for the dead will reach them? I would say the answer is both Yes and No, if you could try to understand that the departed souls are in their frequency form and it's only our thoughts and prayers of frequency form could reach them. So the departed may receive our thoughts of any form. Some who did not receive could be burning in the bottomless hell's realm. 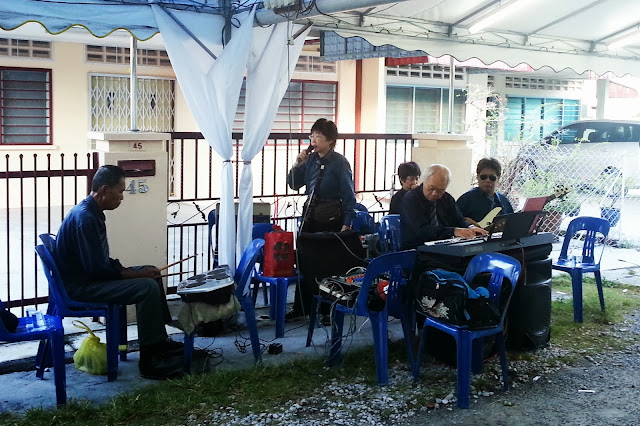 4. The funeral had a band too and the diva could croon out very sad & eerie songs that gave me goose bumps. This band later followed the funeral procession where they blew loud trumpets with the clashing of cymbals & huge drums being played. 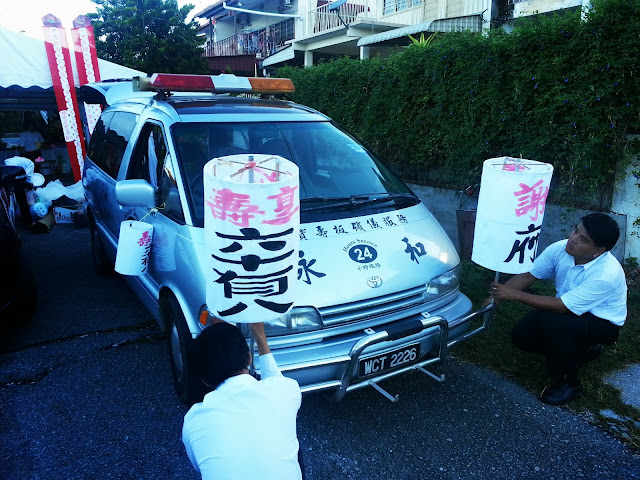 5. The minimum days to keep the deceased before funeral would be 3 days, subject to the decisions made by the family. Some would follow up to one week or more. In modern Thailand today, a funeral could even take up to many months! The above photo was the hearse which transported my father in law. The funeral took off at 10:00am after many rounds of last paying respects ceremony by the immediate family, relatives, friends and business associates. 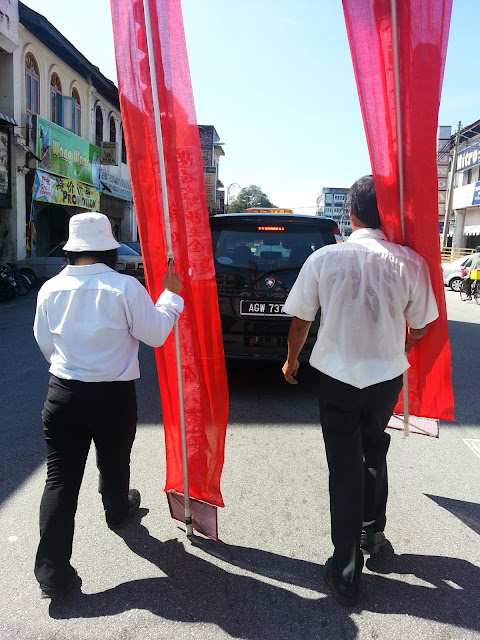 6. I am the only son in law and had to lead the whole procession by walking right in front with red cloth banner slung across my shoulder. I had to pay the carrier RM150 to parade the tall banner written with my name while I trailed behind him for some 3 kilometers journey!
It was the longest funeral procession I have ever attended in my life! The hearse left the home atop Kampar's Golden Dragon Hill and winded its way down to the main street. The hearse made its sombre journey across the 3 mains streets from one end of the town until the other end, passing the big fields, markets, lakes and all the business establishments. 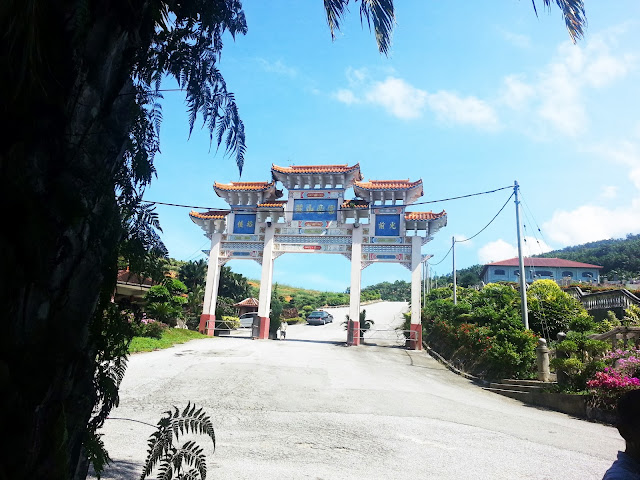 7. The morning procession halted the traffics and attracted hundreds of curious passers by who were attracted by the loud band playing funeral songs. Of course, everyone had a good stare at me for leading the whole long procession that spanned some 50 metres. I kept flipping my hair back and wiped my greasy forehead sweats to make sure I looked handsome and smart. Ahem!

We all ended up at the new cemetery outside the town. The Namo Lou (Taoist Monk) conducted the final rites which included the tossing of a live chicken sacrifice-ritual over the grave!!! It gave me terrible goose bumps and spine chills to hear the poor chicken balking loudly "Kiok-Kiok-Kiok-Kiok"...! I closed my eyes tightly and looked down.
The second son made decision not to let the Namo Lou wrangle the poor chicken's neck so the monk threw the chicken at my brother-in-law to catch and release. The chicken had a new lease of life.