My close childhood friend Henry passed away about 2 months ago after a short illness. His death came as a huge shock for us as he was so active in the different Facebook groups that he created. Suddenly he went silent and nobody noticed it. Within few days he died of mysterious illness at the hospital in Skudai. Yesterday I had lunch with several school mates and we talked about Henry's unhealthy lifestyle while I pointed out that he wasted much time leading meaningless life. I reprimanded him many times about the porno stuffs that he shared in the chat groups which I am aware what, cause & effects would bring. I am not saying that watching it, is right or wrong but when one tries to forward all the videos aggressively to hundreds of people daily is another story. You can be the judge.

So 2 days after his funeral and cremation, Henry came into my dream. It was so clear and vivid that I spoke to him, knowing that he had passed away. He showed me many folded "gold paper" ingots that we often see at Chinese Taoist funerals. I examined the folded "ingots" and noticed that they were unusual in shades of dark gold prints with pictures of deities on them. Henry pleaded with me to burn lots of such gold paper offerings for him besides dedicating prayer merits for his soul. I nodded my head and assured him that I would help. Next morning, I woke up and could remember all the details of the dream. When you dream of your departed loved ones and could remember every single details such as the clothes they wore or the conversations engaged, it is very likely the soul had visited you for closure.
I asked my wife to register Henry's name for the special prayer sessions held at our Tibetan Buddhist Temple in Seattle, USA. Hopefully, my friend Henry could be rescued and ascended to the Heavens of Western Paradise (Amitabha Buddha's Heavens)
When one is alive, it is important that we do a lot of charity and prayers so that we could accumulate good merits for our next life in other dimensions.
******
I was head hunted by Dato Simon Lee while I was still attached to the HKG advertising agency. He was looking for the most capable person to be the P.A. to the politician who had just won the the Member of Parliament seat in the landslide win that kicked MCA's Mah out.
I decided to accept Dato Simon's offer as he was my agency's supplier in Billboard making and he knew exactly how I worked. He was kinda impressed that I could operate all the softwares in the computer from the different Adobe designs to all the Words, Powerpoint, Excel and many others. I would say that it was the happiest and most relaxed company I had ever worked in my whole life. I got along very well with the politician YB Seah and my tasks was to handle all his business export plans to China. We both had close bonding like real brothers.
Sadly, my boss was a heavy smoker and drinker which I loathed. I got ticked off each time I tried to advise him to cut down his daily 4 packets of cigarettes to one pack. Within 3-4 years working under him, he had developed lung cancer at Stage 4 which had spread to other organs. It was the saddest day of my life when he passed away within few months. I missed him so much as I still continued working at Dato Simon's office and all the business files were still on my table. Everyday I would say short prayers for YB Seah with the hope that he would not suffer in wherever he had gone to.
One night, I had a clear and vivid dream about 2 years' after my former boss' death. I was sitting on a white sofa inside a huge transit lounge where everything was white. I could not see the walls and ceiling as they were all in a misty and cloudy ambience. There were many other beings around me and they all wore white attires. Suddenly, someone called me and tapped my back. I turned around and saw my ex boss. I was so surprised and happy to see him. In his usual hasty tone of talking, he told me that the Hell's Officer had allowed him to come up for few minutes to meet me!! Whoa! My eyes went wide and felt speechless. My ex boss quickly uttered politely and said "I need your help. Please help me". He bade me farewell and had to leave quickly. Poof!! He just vanished off. I clearly understood why and what had happened to him.
It dawned upon me that I might have some fate with the Hell's officer to get such visitors in my dreams recently. I could only guess that I probably built the fate after having printed thousands of copies of "Journey to Underworld" books which were all distributed to many temples in Malaysia to create awareness. That was over 20 years ago. I had many dreams including meeting my grandfather and both parents but I will slowly share in future. They were not in hell like others and could easily come into dreams. I guess they had the merits to fly and roam about like human beings using money to travel about. So we better be good, do good and collect enough merits for ourselves in the next life.
****
on July 28, 2022 6 comments:
Email ThisBlogThis!Share to TwitterShare to FacebookShare to Pinterest

I am still undergoing my cancer treatment but life still goes on as usual for me. I cannot sit still as Idle Mind is Devil's Workshop. So I do meet many friends and closed sales with new far sighted customers for the bereavement packages. Yesterday I dropped my wife off at her educational centre and hopped opposite to eat my favourite Polo Bun and HKG styled coffee for my tea break. 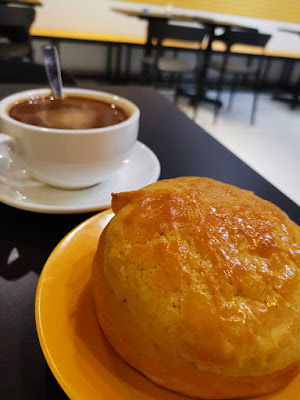 I love to sit there alone at the same table and face the wall of framed photos showing all the famous actresses from Shaw Brothers and TVB studios. I like the feeling to be immersed to the happier memories of my younger days spent in Hong Kong when planes still flew in and out of the old busy Kai Tak Airport in Kowloon City. My sister and her ex husband used to live in a 4 storey Mediterranean styled resort homes that overlooked the ocean in Lantau Island. That was in the 1980s and it was truly the earliest eye opener for me to see so many foreign expats living there. They had not built the Tsing Ma Bridge yet that connects Hong Kong Island today with the Chek Lap Kok Airport in Lantau Islannd. Those days I had to take boats daily to commute to Hong Kong and Kowloon. My ex brother in law was holding such a high profile job that he often hired 6 door Grand Mercedes to attend functions. I had the opportunity to sit inside once to go to the airport before flying home. I felt like a movie star with my head swelled like pumpkin. Life is just an illusion. 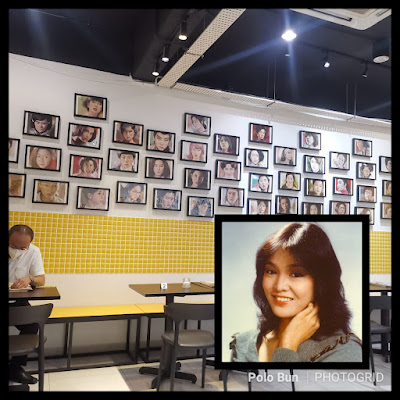 As you might recall that I was once hired by a HKG advertising which is based in Kuala Lumpur. Let me recap that it was founded by the popular HKG Canto Pop singer/actor named Eric Kot Man-Fai who is closest buddy with actor Stephen Chow and they both teamed up well on stage and movies. I was being head hunted after weeks and months by the Hong Kong bosses for the right candidate with much TV commercial experience background. They thought I was a bonus as I appeared on RTM's TV daily for few years instead of just doing the production team work in the background. Fast forward to my over a decade working with them, I learnt so much from my immediate great boss who taught me all the ropes and tricks of smartest advertising which greatly helped me to be the salesman today. I am proud that there is nothing I could not sell from million dollar homes, factories, private antique collections until funeral packages to burial plots. I might sound like blowing my trumpet very loudly but I have come a very long way with my own sweat and tears. Phew!
So, what's so special with that HKG advertising agency I worked for? They were the first in HKG to only handle property advertisements where they often hired movie stars from TVB to endorse the high end projects in Hong Kong, Macau and China. With my founder boss Eric Kot's position, all the stars were his buddies. That's where I heard lots of gossips and jokes. In the above photo, the actress Carol Cheng Yu Ling was the most respected by the film crews as the best professional and thoughtful actress who was always punctual and made things very easy for everyone! They loved her because "Time is Money" in Hong Kong's culture where they count our working time by the minutes and seconds. That's how the work stress contributed to my cancer today. I am not kidding on this stress facts. 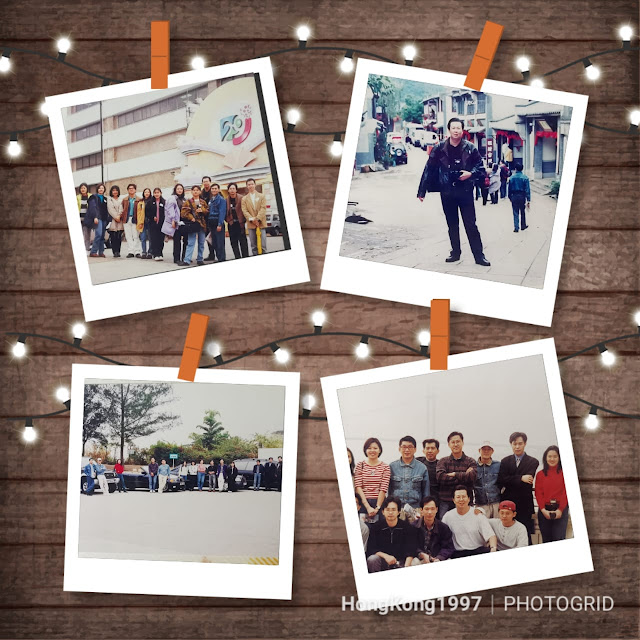 I never planned to share the above photos as I had to be discreet and treat them with some confidentiality. However, I have changed now after staying in the hospital so many times recently on the brink of deaths while battling my complicated colorectal cancer. If I die tomorrow, all my photos and memories would be perished forever. I think I should share some stories for knowledge and entertainment after all Laughter Is The Best Medicine.
Photo (Top Left) My boss, colleagues and I posed outside the TVB studios at Clearwater Bay where we were given very special permit to tour every production room & watch all the private filming in real life actions.
(Top Right) I was posing alone at their TVB studios where all the props of China old scenes were cleverly repeated and recycled for every shoot!! Unlike the Universal Studios, they would make new props for every movies. Who is smarter?
(Bottom Left) The fleet of luxury cars belonged to Eric Kot who loaned them all to fetch us around like VVIPs!! We all posed outside the luxury homes at the peak of Hong Kong's Mid Levels (Bun Saan Keui 半山區)
(Bottom Right) My colleagues and I posed with the HKG bosses. The guy behind me in white cap was a handsome TVB actor and brother of Eric Kot.
Hope you enjoyed reading my Polo Buns gossip.
****
on July 24, 2022 16 comments:
Email ThisBlogThis!Share to TwitterShare to FacebookShare to Pinterest
Newer Posts Older Posts Home
Subscribe to: Posts (Atom)